Share All sharing options for: Remembering the Seniors: Jordan Kay 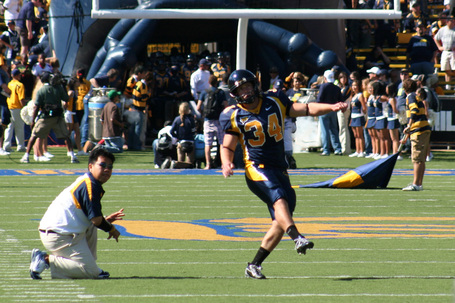 We thought we should go senior by senior and take a gander at their Cal career.  Some photos.  Some videos.  Some stats.  And if HydroTech has any personal stories of his time with the team, he'd share them.  We did Nate Longshore months ago, because Twist screwed up the scheduling.  Also, he's so dreamy!  And we just did Alex Mack. And, then, Will Ta'ufo'ou.

Today, we do Jordan Kay.

TwistNHook:  Why have me describe Jordan Kay when we can get the ladies of CGB (Calendar Idea?) to do it for us, thanks to their delightfully sexist (men as objects?!?!) Women's Huddle FanPost.

OskiWeeWee:  OK, #34: Placekicker Jordan Kay.  Super nice and totally distracted when we started taking pictures with him while he was talking.  We told him just to keep talking, but somehow he felt that was rude.  How sweet!  :)  I have a special affinity for kickers, coming from a soccer background, so 8 out of 10 on the cuteness scale.  ("Really?" asks Zoonews.  "Yes, Really!") 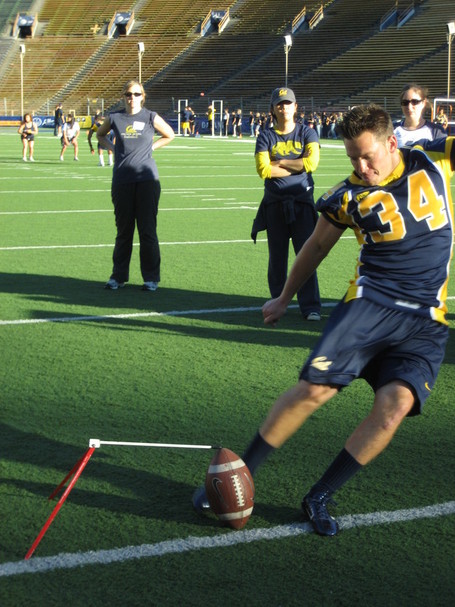 BearBallCarrier: Jordan Kay, 10 out of 10! He should take off that helmet more! Oh so hot. I stand by it.

AndBears: To make this scale more probable, I'm going to have to agree with zoonews, as ridiculous and unbelievable as it is. I would only put Jordan Kay on a 7. He's nice, and totally a good sport with all the interrupting we did, but he just doesn't do it for me. Great, now I feel like a traitor because I want to jump him slightly less than our other fantastic Bears.

Kittwin: I agree with zoonews and AndBears, you people are crazy. Kay is generously a 7, but I have to deduct a point for his goofy I'm-playing-the-jerk-in-an-

80s-movie hairdo. Also he is what us tall people like to call "not tall."

RemorsefulBruinBabe:  Seriously, guys.  He looked like a little spiky-haired adolescent.  Cute, but more like your friend's kid brother than a crush-worthy hunk.  Maybe I just like my men with a little more facial hair though...

BearBallCarrier:  Woot, he's all mine! The hair adds like an inch. See, now it makes sense. 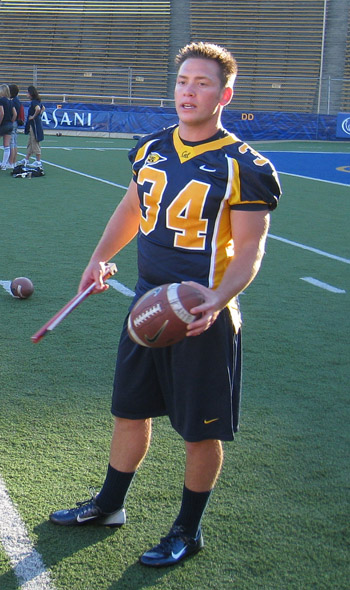 So, Marshawnthusiasts and one Jahvidtician, what are your thoughts?  Besides his apparently amazing legs, how do you remember Jordan Kay?

Avinash: Besides his amazing legs?

Yellow Fever:  It just occurred to me - has anyone ever made an "Every kick begins with Kay" joke?  If not, let me be the first.

Other than that, I don't really have much to add to my memories of a guy who was the quintessential college kicker.  Serviceable from short range, reliable for extra points, made you hold your breath every time the team would get stopped around the opponent's 30.

Avinash:  King of the chip shot!

He's like the dude who's the master of the three foot putt.

Ragnarok:  And perfect on extra points!

So, not a fantastic leg, but money up close.  Kinda like those kickers who hang around the NFL until their mid-40's.

And for what it's worth, I was in the near end zone at Autzen in 2007, and I would swear that kick was good.  I honestly don't know what those refs were looking at...

HydroTech:  One of my favorite memories of practices is when the kickers get "pressured" at the end of practices.  Tedford would have the FG team and the defense set up for kicks.  The rest of the team would crowd around the kickers, yelling, screaming, waving their arms, and doing whatever they could to distract the kickers, while the kickers had a FG kicking competition.  I suppose all that distraction helps a kicker focus on the task at hand, but I'm not sure it replicates the pressure from making a game-winning field goal that could send your team to a BCS bowl or win a national championship.  Nevertheless, it was sort of fun to watch the kickers and all the players harassing the kickers.

Avinash:  Sounds like what we do to Twist when he's writing a post. No wonder they always turn out so malformed.

HydroTech:  I think kickers have it the easiest during practices too.  They can only do much kicking without tiring out their leg.  So I seem to remember them sort of stretching, doing other mild exercises, and playing mini-kicking games with each other on the sidelines during regular practices.

One day after practice I was getting dinner in the Memorial Stadium dining room.  After I had selected my food from the buffet, I looked around for a place to sit.  Being that I wasn't a player this presented a slightly awkward situation.

Many tables were filled with players conversing over dinner.  A few tables were empty.  So I basically had the choice of sitting down at a table with some random football players, or sitting by myself.

I suppose most people would think that you'd just go sit with the players.  But while many of the players know you since you're there at practice every day, you're also not exactly friends with them either.  I mean, sure they know your name, and will say hi to you, and talk to you if nobody else is around.  But they're not the type of friend that you'd necessarily hang with outside of practices and the stadium (for me at least, although many of my other friends had very good friendships with players and would socialize with them frequently outside of football).  It's sort of like a business relationship, rather than a friendship you might have with your highschool buddies.

Despite that sort of business-relationship, I suppose most people would still just sit down at a table with the players, strike up a conversation, and just be outgoing and social.  Well, that sort of brings up the issue of privacy.  I don't know how the players would feel with another person (whom doesn't have a true "friend" or "teammate" status) sitting down at their table and listening to their conversations.  The players enjoy a small level of privacy in the dining room being that it's not open to the public, and it's usually just players in there that they know.  So they talk about their private life and whatever is on their mind.  I'm sure they would feel a bit awkward if someone outside that circle of trust came and sat down at their table and was able to hear all that they were talking about.  Perhaps I am too conscious of other people's privacy, but that's how I would feel.  If I was eating dinner with some close friends/teammates and someone I knew mostly through work, came and sat with us then I'd feel like I would have to sort of restrict the topics of conversation with this person around.

So I decided to sit at the empty tables.  I really wanted to let the players have their space and let them feel like they didn't have to restrict their actions with me around.  I moved towards one of the empty tables and was putting my stuff down when Jordan Kay noticed me from the next table over. 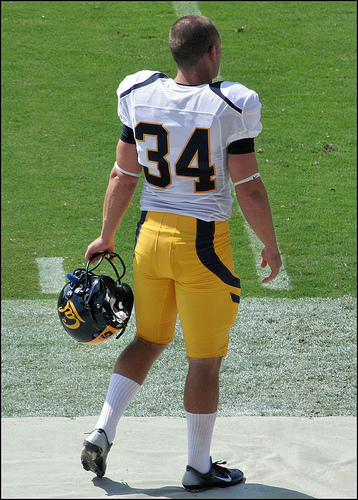 "Come sit over here.   Don't sit by yourself," he said, obviously noticing the awkward moment of deciding whether to sit at an empty table or a table with players. I moved over to his table and we talked about football, college, life, etc.  He was friendly and talkative.  He was one of the few players that really went out of his way to talk to me.  This isn't meant to suggest that the other players aren't friendly, but most will primarily only talk to those that they knew best - and that's their teammates.  But every once in a while, one of the players would come over during a practice or in the training room and strike up a conversation getting to know you outside of the football context.  Jordan was one of those guys.

Finally, another memory of Jordan occurred during either an off-season practice.  The team was scrimmaging and it was a special teams period where kickoffs were being practiced.  Jordan was the kicker and boomed a kick down the field.  The returner broke the initial web of defenders and started streaking down the east sideline towards the south endzone.  Only one defender was left between the returner and the endzone.  It was Jordan.

Now, unlike most kickers who sort of run with an akward gait, appear like they're about to trip over themselves, and couldn't topple a Janga tower if they were trying, Jordan moved like a linebacker.  Sure he wasn't perhaps as big as most linebackers, but Jordan squared up his shoulders, and delivered a big time forceful tackle on the ball carrier along the sidelines saving the touchdown.

I was on the west sideline with a group of players watching, and after that hit, one of them turned to the rest of the players asking in amazement, "who was that?"  I wasn't surprised by what I had just seen.  If you've seen Jordan at practices, you'd know he was a very athletic guy who was built more like a muscular defensive back rather than a twiggy kicker.  As someone once told me, Jordan wasn't a kicker who played football, but a football player who also kicked the ball.