We did it again!  We moderately succeeded yet again.  It appears to be our MO.  Do well.  But not too good.  Then, you guys might respect us in the morning.

Yes, we got 3rd place!  And not just in any sort of random Pick Em, like Addicted To Quack's.  Their Pick Em was so pointless, I came in last and JShufelt came in first.  Please, join me in a round of "WHA?!??!" 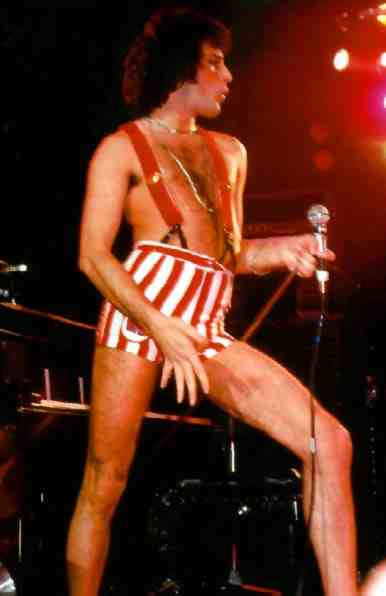 "This keeps my thighs very cool and breezy!"  via www.queenmania.net

Now, you might ask, why is this post seemingly the Bronze Medal sequel?  Because this isn't the first time we've gotten 3rd place.  No!  Many moons ago, a blog that hasn't updated since 2007 decided to rank ALL the Cal blogs.  Not just some, but ALL!  And we got 3rd!  Behind two blogs that no longer exist (and one that didn't even exist AT THAT TIME!).  It was tough to lose out to a blog that had stopped by then.

It was even tougher to lose out to The Band Is Out On The Field.  Because, as this Barry gentleman noted, they sucked balls.  So, doing what any rage-filled ball of insecurities would do, I challenged TedfordIsGod to a monkey knife fight.  That's still an open offer, btw.  You never did get back to me TedfordIsGod.

You might be asking yourself "why is this night not different from all other nights"?  Toads obv!  Time to challenge the #1 (Five For Howling) and #2 (Clone Chronicles) to a monkey knife fight!  It's the only way!  And don't forget, The Maharg is organizing a Fantasy Monkey Knife Fight League.  Can I suggest you draft me first?  I'm great at monkey knife fighting!  Nobody is better at monkey knife fighting than me.  Certainly not Tim Lincecum.

After the fold, check out the Top 10 SBN blogs and a special message from Avinash about our Pick Em League!  You'll never guess who won there.

Clearly President Obama is trying to lessen our addiction to sport by predicting outcomes weeks in advance: First the Super Bowl, now March Madness. He already has Cavs-Lakers in the Finals, so we might as well just pack up and start working in homeless shelters nationwide for the next two months.

North Carolina rolled to the title, and "i'm the best bracket maker" knew very well that riding against the hope train would've ended poorly. Of course, he also got the rest of the Final Four correct, which put him pretty much in the driver's seat. We're pretty sure he's registered here so if he ever wants to claim victory and post about his methodology, he's free to brag!

You know who else wasn't stupid enough to ride against the hope train? Remorseful Bruin Babe.  Some of you might've been laughing at her, but she ended up beating over 80 percent of you. The lesson we've all learned: never fill out a bracket unless you wan to feel horrendously inadequate as a sports fan.

And finally amongst the mods, Twist won. (Ed Note:  NAILED IT!) Again. We're looking for a mathematical relationship where the excitement of March Madness is inversely proportional to how well Twist's bracket does. Eventually we'll figure it out, since technically he did better last year but this year's MM was probably worse. That'll probably consume our entire summer, so be prepared for a 70 post series about this groundbreaking research. I'm gonna get published!"