Why Does Cal Use the Screen Pass?

Share All sharing options for: Why Does Cal Use the Screen Pass? 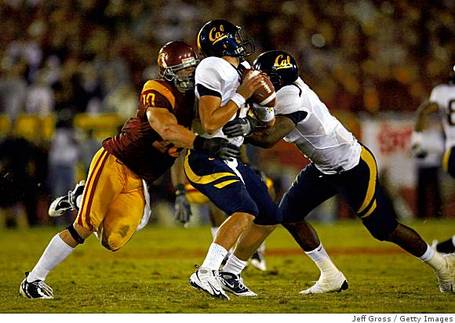 In my last post I addressed whether Cignetti had predictable playcalling in the 2008 Cal vs. USC football game.  As that post began to circulate its way across the Cal cyberspace, I noticed a fairly consistent trend of Cal fans disparaging Cignetti.  After I had seemingly given solid statistical proof that he was predictable in his playcalling, Cal fans quickly turned to the fact that Cal seemed to use the screen pass so much last year as an example of Cignetti's faults and further proof of his predictability.

I suppose I shouldn't have been surprised that so many Cal fans were criticizing Cignetti due to the screen passes.  Many of the moans and groans of the 2008 season were due to the supposed ineffective screen passes.  Cal almost lost its starting runningback, Jahvid Best, to an injury from a screen pass.  Screen passes rarely seemed to get more than three yards per attempt.

If screen passes are so ineffective, then why run them?  Was Cignetti just an idiot?  Or is there some other strategic reason for all those screen passes?

These are the questions that I assume were going through many Cal fans' minds as people were criticizng Cignetti.  It is also those questions above that I intend to answer.

Well, in my previous post about the 2008 USC vs. Cal football game, I noted that Cal passed from shotgun a whopping 94% of the time.

Now just think about that for a second.  If it's such a sure thing that Cal is going to pass the ball when the QB is in shotgun, what would defensive linemen know to do?  They would know that they are free to go into their pass rush techniques.  In other words, they are free to tee-off on the QB.  They are going to pass rush without much, if any, regard for protecting against running plays.

Cal doesn't use shotgun trap plays any more which we saw in 2006 under Dunbar.  Cal rarely, if ever, uses the zone read since neither of our 2008 QBs were really a huge running threat.  Cal rarely used the QB draw too.  On a semi-less rare occasion, Cal would use the runningback draw from shotgun.  But all in all, Cal rarely ran the ball from shotgun.  With the defense knowing this, they were free to aggressively pass rush the QB and didn't have to worry about the running threat.  The defensive linemen could attack a single gap (the spaces between offensive linemen), instead of controlling gaps to protect against runs.  With Cal passing the ball so much from shotgun, and the defense just going into pass-rush mode, how can Cal hope to defend against such aggressive defensive line play?

Cignetti chose to use the screen pass as a defense to the high tendency to not run the ball from shotgun.  Cal would screen pass almost proactively - meaning they would do it early on to let the defense know that they can't get too aggressive otherwise they'd pay the price.

The effect of the screen pass on the defense is that the defensive lineman now have to worry about being too aggressive.  They can't just rapidly attack one of the gaps and get penetration to pressure the QB.  If they do so and Cal is screening, the defense risks putting many of their defenders behind the play and out of the play.  Likewise, cornerbacks now start hesitating on pass plays to protect against the expected screen pass.  Thus, instead of backpedaling upon the snap of the ball to stay with WRs, they may hesitate and/or step forward (instead of backwards) to provide defensive support for screen passes.  Additionally, the cornerbacks will also start eyeing the QB, instead of the WRs which can allow the WRs to break presses easier and also to get behind a cornerback to who has bit on what he thought was a screen pass (but wasn't).

In effect, screen passes slow down the defense.  The defensive line has to play a bit more conservatively.  They have to play more horizontally and less vertically.  The screen pass helps keep the defense somewhat conservative.  That is why Cignetti and Cal used the screen pass fairly frequently in 2008.

So while it may not be the greatest tendency to pass the ball so much from shotgun (in other words not running the ball when the QB is in shotgun), such a tendency can be protected via using the screen pass frequently and proactively.  Using the screen pass will slow down the defensive line and cause them to be less pass-rush aggressive, cause them to play more horizontally than vertically, can cause CBs to hesitate on their backpedals, and draw the CBs eyes off the WRs.  All these factors can alleviate pressure on the QB from the pass rush, and help WRs get behind CBs.