He certainly would need one after he got curb stomped by some random dude. And we all know Hackett loves to beat people up.

It's a match made in heaven:

First up, Cal faces Arizona. Let's look at them some more:

Arizona Scouting Report
A Look at Arizona
Arizona is coming off a weekend in which they lost to Washington State and then-No. 21 Washington. The Wildcats are currently on a three-game losing streak. Jordan Hill leads the squad in scoring and rebounding, averaging 18.2 ppg and 11.0 rpg.

Cal-Arizona Series History
Arizona currently leads the all-time series 51-26, having swept last year's two games against the Bears, a 79-75 road win in Berkeley and a 10-point home victory in Tucson. Cal won the first meeting of the year with a 69-55 victory in Berkeley in both teams' Pac-10 opener.

Arizona Head Coach Russ Pennell
Russ Pennell assumed the role of interim head coach at Arizona on Oct. 24, 2008, in the wake of Lute Olson's retirement. Pennell returned to college basketball with the Wildcats in May of 2008, ending a two-year stint as the head of the Arizona Premier League in the Phoenix area. Most recently, Pennell served as an assistant coach for Arizona State for eight seasons from 1998-2006.

Some videos against UCLA:

Oddly, Chase Budinger doesn't play for Mike Montgomery. Because he'd be the perfect "Annoying White Guy" that Harper Kamp currently plays. Here is a video of him throwing down.

Keep an eye out for Jordan Hill:

Hill scored 30 in a game against Houston:

So, that's Arizona. Here is ASU:

Arizona State Scouting Report
A Look at Arizona State
Arizona State and Cal head into the final weekend of the regular season tied for third in the Pac-10. ASU is coming off back-to-back overtime losses after being swept by then-No. 21 Washington and Washington State on the road. James Harden currently leads the Sun Devils in scoring with 20.8 ppg, which also leads the Pac-10.

Cal-ASU Series History
Arizona State leads the all-time series 34-32. Last season, Cal and ASU split their series, with the road team winning in each game. The Sun Devils beat Cal in Berkeley with a 99-90 double-overtime win, while the Bears beat Arizona State 76-73 in Tempe. In their first meeting of the year, Cal upset the Sun Devils 81-71 in Berkeley.

Arizona State Head Coach Herb Sendek
Arizona State is coached by Herb Sendek, in his 16th year as a head coach and third season at the helm of the Sun Devils. Sendek turned ASU, which finished with a Pac-10 record of 2-16 in his first year at Tempe, into a team that won 21 games and a school-record 15 home wins in his second year.

This popped up in the ASU search, bc it is against ASU apparently. JOURNEY! SEPARATE WAVES!

Ok, that is a LOT of videos!

Often, I put somebody out here that might not be all that well known. Even within the genre of music that they inhabit, they might not be the most well known. Not that I don't love the Miles Davis' or Charlie Parker's of the world, they certainly have their place. And yet for some reason, I just don't think to put a song of theirs here.

People, I am sure, have certainly heard of John Coltrane (or alternatively Saint John Coltrane). I bet were you to poll people, the first thing for John Coltrane that would pop to mind would be "Blue Train." It's unclear to me how many people would name an album, but I predict that'd be the #1. Were we to expand it to albums where Coltrane was on it, even if not the lead, it'd probably be "Kind Of Blue" by a magnitude of a billion. Speaking of which, it is a pretty good album when John Coltrane and Cannonball Adderly are you sidemen.

But that's neither here nor there. Long story short, Blue Train is a great album, no disputing that. But I've always been partial to "A Love Supreme." It's nowhere near as approachable as "Blue Train" or "Kind Of Blue" but it was written to pay homage to Coltrane getting off of drugs. That it was God's Supreme Love that helped him get off of drugs. It's a 4 movement long piece that lasts something like 30-40 minutes. There's a live version from France that lasts quite a bit longer. It's OK. There are also B-Sides with a sextet version, which is interesting.

But I've always loved the just, regular basic version. I am not a Coltranethusiast such that I can map out the various turns in his musical style to an extreme detail. But it seemed to me that after 1965, when A Love Supreme came out, he started to get progressively and progressively weirder. This is sort of the last album of his I really take to. The main base line sets the scene for the song and its just a basic four note progression. It is such a simple song, really, but Coltrane makes it complex in ways I'd be lying were I to say I understand.

BTW, there must be a copyright battle or something, because it seems hard to find some of these Coltrane songs on YouTube. The video I found was of a person playing the original recording. Cool in its own right, but the visual is not much. 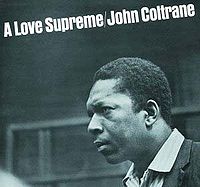