You thought you knew all there was to know about Tom Schneider, didn't you? Didn't you, you cheeky bastard? After checking Wikipedia, you knew that Tom Schneider is a professional poker player from Phoenix, Arizona. You knew that Schneider was a certified public accountant and former president and chief financial officer for three Arizona companies before beginning his poker career in 2002. You even knew that Tom Schneider is the author of the book Oops! I Won Too Much Money: Winning Wisdom from the Boardroom to the Poker Table which provides lessons for both poker and business.

Well, if all you did was read the "Tom Schneider" Wikipedia article, you wouldn't really know anything about Cal kicker Tom Schneider. Wikipedia hasn't failed this much since it cited to me as a legitimate source of information and news. You wouldn't know that he had to leave Cal, because the NCAA only granted him an extra year of eligibility for D-II football. You wouldn't know that he played a year at Northern Alabama University to prepare for the NFL. He even has his own blog about it, BamaTom. You wouldn't even know that Tom Schneider wrote a book about Cal sports! It's called "Nate Longshore And 4th Quarter Interceptions: The Eternal Love Affair Continues." Actually, it is a photographic recap of the Cal football team during the 2007 season. It's gorgeous.

It is called Inside The Huddle. You can buy it here. We met him here. He agreed to do an interview and here are the results.

1. How different is kicking in practice versus in actual game situations?

Kicking in games versus practice is very different. I will try and close the gap by making my practice sessions as intense as I can. For example I will not let myself leave the field before I make a certain number of kicks from certain spots of the field.
2. How does one usually get into kicking?
Most players get into kicking through soccer; that was my path. I played soccer throughout high school and was convinced I would play in college. My senior year in high school the football coach convinced my to come out and kick for one season. The season went well, and in the end I had better collegiate opportunities playing football, then playing soccer. 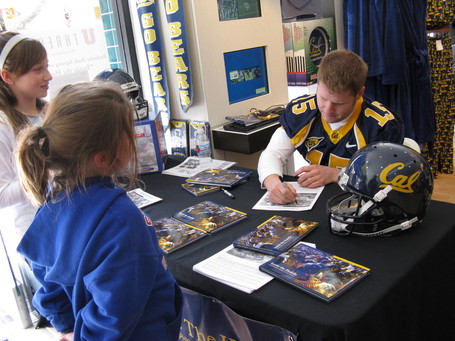 3. When did it become a real possibility that you'd kick at the D-1 and Pro levels?
The winter of my senior year of high school I got word of a high school kicking combine (competition) in Los Angeles. I attended the combine, won it, and had the opportunity to go to school pretty much any where I wanted to.

4. Does kicking require a lot of natural gifts or just years of technique adjustment and practice?

Kicking is a goofy talent. Kicking has a lot to do with natural motion/leg speed/muscle memory/control of the leg. I'm not the strongest/fastest/flexible person on the team, but for whatever reason I can strike a football well.
I'm not saying one can learn to strike a football well, but having a natural intrinsic ability to kick a football is almost a prerequisite to being a good kicker.
5. If you were to describe the ideal PK in term of body size (leg length, foot size, etc.), what would he look like?
Looking at the average size PK in the NFL, I would say Ideal size would be 6 foot, 200 pounds, with a size 10 or smaller shoe.
6. If I were to start my theoretical son (who should, in theory, have ridiculously long legs like his old man) placekicking as early as possible, what type of books, drills, videos, and camps should I look into?
Personally I enjoyed not getting into kicking until later in my athletic life. Football is still pretty fresh/new/and fun for me.
I would recommend getting your son into as many sports as possible.
Soccer/basketball/golf/whatever. I think situations where he can be competitive with a little bit of pressure.
When your theoretical son wanted to start kicking I would tell him to get in touch with a personal instructor (like former Cal Kicker Mark Jensen markjensenkicking@gmail.com), that is the best way to get better, someone who knows what they are doing, watching hands on. 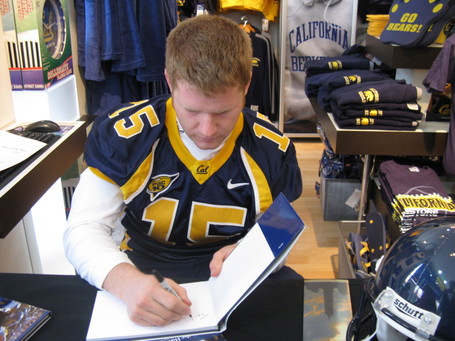 7. Take us through your mental and physical preparation as you get ready to make a kick. What are you thinking as you set up and start the kick? Do all those little coach tricks work? For example, do you think kickers can get iced? And what's up with that "Take a Timeout 1 second before the kick" trick? Does that actually work?
Before I step up to kick a field goal I go though a mantra that signals to my body it's go time. I do this every time I kick practice/game whatever.
I don't think freezing works. I would be interested on some statistics on it.
I figure it just gives me more time to ensure I am aligned properly.

8. How much do you get to work with your "game" holder during practice? And how much does the snapper/holder/kicker unit get to work together during practice each week?
This depends on the experience the unit has together.
Typically, Assuming we have a game on Saturday, we will go through some snap hold kicks, Monday, Tuesday, Wednesday, and Thursday. Probably about twenty-thirty reps a day.
Later on in the season, we may not go on Mondays.
9. Does wearing a helmet with that kicker facemask make you feel like as big a dork as it seems it should?
eh not really. It would be more weird to be the only one without one. I wish we didn't have to wear them, but no big deal either way.

10. Is kicking from the hashmarks significantly more difficult from the middle of the field?
I want to say no, but looking at my career statistically, I have missed a few more kicks from certain hashes, I don't know if that had to do with anything, but it may have. 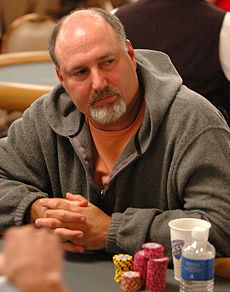 "The other Tom Schneider" via upload.wikimedia.org


11. Discuss the kick at the end of regulation at Autzen in 2005 – did you think you'd made it? How is your process different when you have a major time constraint like that?
I knew the kick was going to be close. Watching the film after the game is only missed to the left by about a foot. We practice last second field goals a couple of times throughout the week to be prepared for situations like that. Its a bummer not to hit them all, but the challenge/risk/reward is what makes it fun/exciting
12. What was the recruitment process like for you going into college? Did you know you wanted to go to Cal right out? Were there any other schools you were seriously considering? The rumor is that Tedford flew to Australia just to see a kicker. Did he manage to make the 20 minutes drive to the Dub See to personally see you?
I wanted to go to Cal for three main of reasons. The team was on the up and up with a hot new head coach, the team didn't have many kickers on the team so I knew I could get in right away and start playing, and they were close enough to home I could get help with laundry/food if needed.
13. Your former high school has been in the Cal recruiting news recently. Las Lomas High WR superstar Diante Jackson decided to go to Oregon instead of taking advantage of the offer that Cal never extended to him. Many have criticized you for not doing enough to get Diante Jackson. What do you say to these people, like everybody, who think you really let Cal down here?
I would happily help Cal out with anything. From my understanding he was looking to get out of the state. I believe his big two were Colorado and Oregon. I have also been away from the bay area for much of the past 8 months.
I think that Cal does a great job in selecting players to bring in, and have full confidence in Coach Tedford and his staff to recruit and compete at the highest of levels.
14. Do they REALLY have live Lions at Northern Alabama football games?!?!?!
Two of them, Leo and Una. And they eat meat Popsicles during the game.