Another week, another exciting installment of the Pac10 Roundtable. Lots of involvement this week as we discussed Arizona basketball. Arizona Desert Swarm. Addicted To Quack. CougCenter. Conquest Chronicles. All great blogs and they all checked in on this week's hypothesis:

Here is this week's hypothesis:

Arizona is the only Pac10 team to make the Sweet16. Because that makes sense! 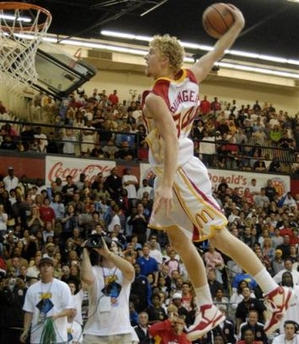 California Golden Blogs: They were awfully fortunate to draw Utah (a weak 5 seed) and have Cleveland State dismantle Wake Forest. They will be pummelled into oblivion in the next round and all will be right with the world. Right?

Conquest Chronicles (Laughing Stock): Yup, some things definitely fell very favorably for UA. They were favored by Vegas (and a few basketball stats nerds) over Utah, and CSU was a very lucky break. USC was also in a similar situation with a favorable draw for the first round, but Michigan State was going to be a tough out no matter what. Actually, in some twisted sense it does seem reasonable that Arizona made it to the sweet 16. Hope they enjoy it though. I think Budinger and Hill are gone after this year, and their recruiting class was shot to pieces. The Wildcats are in for some rough times ahead unless they can grab a really great coach early on in the offseason. Think about it this way, would you rather be in the situation about half of the Pac 10 schools are in right now; an early exit from the tournament but with a promising future, or in Arizona's situation; still in the tourney, but with little chance of advancing much farther along with bleak prospects for the immediate future?

Plus, did I use those semicolons correctly? I think I did... Gosh darn complex, multi-clause sentences.

California Golden Blogs: I dunno. More games is more games. More games provides greater visibility as others get knocked off. Imagine if USC had gotten to the second round and given Kansas the fight for their lives. With athletes like Hackett, DeRozan and Gibson, that could maybe convince young, impressionable high school recruits to think, "Wow, they look like pros", and give them more incentive to change their minds about where they want to go. You don't think one top 50 chipper will look at what Arizona did over the rest of the Pac-10 and think, "Well, this might be a place I want to go."?

Azdesertswarm: Some interesting comments on this thread. "Lucky" to get Utah? They were a 5 seed with a center who was 7'2". They won 24 games this season and averaged 71.2 ppg. I don't think Arizona was lucky to get them. How about Florida State? Illinois? If we would have played them, we would have been lucky. Arizona played a complete game and put the hurt on the Utes. Great coaching. Great play. I am pretty sure every team in the Pac-10 (except Arizona State) saw the Cats play that way this year too.

Did someone say that they every team in the Pac-10 is in a better position than Arizona? I want to smoke what you've got. What a sunny, bright, positive outlook for the rest of the Pac-10 teams that are sitting in their respective college apartments watching the Cats on their T.V.'s. I'd rather be worrying about next year from Indiana than from Tucson.

We have said this all year. Arizona can beat anybody in the nation, if they are on. I think that can be said for a few Pac-10 teams, Arizona State, Washington, UCLA. The hard part is having more than 3 guys contributing every game. So far, Arizona has peaked in the Tournament. Kyle Fogg and Jamelle Horne are swingmen who can pick up serious slack, and if scoring, make Arizona hard to beat.

Addicted to Quack: As much as I want to agree with you Joe, most pundits felt that Arizona was a solid upset pick going into the Utah game and for good reason. Utah, even being a 5 seed, did not match up well to the Wildcats and everyone knew it. Yes, Utah had a great season but the same thing happened on the other side of the bracket with Wisconsin and Florida State. The Seminoles were a much better team but Wisconsin was the worst possible match up for them. Arizona got an extremely favorable matchup in the first round against a good team. Not to take anything away from Arizona but out of all the teams in the sweet 16, their road has been the least in doubt. The folks that make the bracket understand the whole 12-5 seed dynamic and they adjust accordingly. It makes for fun drama. If the Wildcats can beat Louisville, then I will start to believe.

Conquest Chronicles (Laughing Stock): I certainly wasn't trying to rag on the Wildcats, in fact when Tim Floyd first came to USC he cited Arizona as the school to emulate in the Pac 10. I also wasn't trying to imply that they don't belong in the sweet 16, they got into the tournament and won their games so in my mind they deserve to be there just as much as the next guy. Finally, I didn't say they were lucky to get Utah, I said they were lucky to get Cleveland State and I said that half (give or take a team) the Pac 10 teams are in better position than Arizona next season, not every Pac 10 team. Sorry if I came off as an egomaniacal jerk and my intent was not to take a big old dump on UA.

CougCenter: Arizona had to play a single digit seed and a double-digit seed; so did Washington, UCLA and Arizona State. Only the Wildcats emerged, which says something. In all truth, Arizona probably benefited from playing the tougher team first, giving the Wildcats the opportunity to make the most of their tired legs. They were fresh enough on Thursday to use their athletic advantage and had just enough in the tank to beat Cleveland State.

California Golden Blogs: Arizona should get credit for doing what no other Pac-10 team could do - win two games and get to the sweet 16. Heck, I would have been happy if Cal had won just one game, much less two. But let's not go crazy. Arizona was very lucky to even get into the tournament, and their performance notwithstanding, St. Mary's probably should have been the last team in. I think that had the selection committee known that Patty Mills was healthy, the Cats probably would have been sent to the NIT.

As for the Wildcats' draw, I think it's fair to call it lucky. Probably every Pac-10 team would have been favored against the Utes - USC was playing pretty good ball down the stretch and Cal already beat Utah, in Salt Lake City. As for the second round - Purdue, Syracuse, Villanova (in Philly!), Michigan St., Cleveland St: one of these things is not like the other! Arizona was definitely the weakest of all the Pac-10 tourney teams at the end of the season, and the fact that they're the last one standing probably says a bit about who they played, as well as how they played. Maybe Arizona can beat anyone in the nation when they're "on", but an over-seeded Utah and Cleveland St. does not qualify as "anyone".

But, yknow, Arizona is exactly the type of team I always looked for when picking tournament upsets. They're talented enough to beat just about anyone, but inconsistent enough that they were given a low seed in the tournament. I used to pick Steve Lavin's Bruins to pull an upset or two every year on the same theory.

Azdesertswarm: Arizona was not favored against Utah. Utah was a 1.5 favorite.