Share All sharing options for: Bears Score 99, Blow By Virginia Into First-Ever Sweet 16 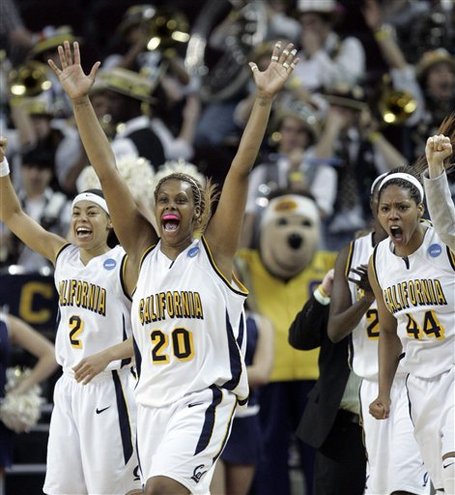 There's no such thing as a 'perfect' game of basketball, but at least offensively, the Cal Women's Basketball team was just about as close as you're going to get Monday night.  They scored 99 points.  99!  In regulation!  Their previous high on the season was 85.  It was an offensive explosion, as Virginia had basically no answer for Ashley Walker or Devanei Hampton inside.  Some of the crispest passing you'll ever see let the Bears pummel the Cavaliers with easy layups, and then Cal tossed in 8 3-pointers for good measure.

Plenty of scoring from the usual suspects led the Bears:  32 for Walker, and 22 each for Grey-Lawson and Hampton.  Those three's 76 points would have beaten the Cavs all by themselves, but they had plenty of help from their teammates.  Lauren Greif added 10 points, but more importantly, 9 assists, feeding Walker and Hampton in the low post over and over again.  Natasha Vital added 5 points and 5 assists as well.  In fact, the first half, the Bears were virtually flawless offensively:  53 points, 12 assists, 1 turnover.  1!  Crazy.

If there's a worry from this game, it's that Cal kept letting Virginia stay in the game in the second half; they ran off a 9-0 run that got them within 11 with more than 12 minutes to play, and Virginia did score 73 points, shooting nearly 50% for the game.  But the game was never *really* close down the stretch, and without knowing much women's college basketball, one could miss the fact that Virginia is a Top 25 team for a reason.  Getting Aisha Mohammed in foul trouble early sure hurt them in the first half, but this is a good team, and Cal clearly outclassed them.