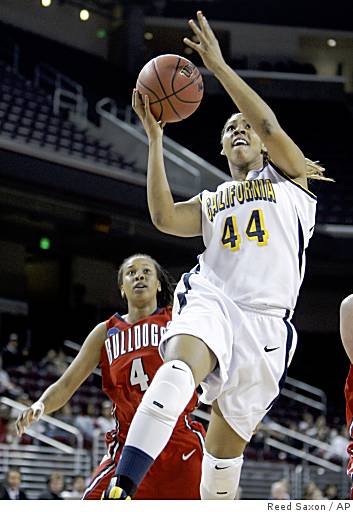 Enough cannot be said about the Bears's defensive effort Saturday night. After getting torched by USC last Saturday from beyond the arc, the Bears came back with a vengeance and denied the 3 point ball almost the entire way, giving up only four made shots and contesting most of every one. FSU only shot 32 percent and their leading scorer Jaleesa Ross was off most of the night. The Bulldogs were better known for the three ball than the Trojans though, so it was easier for Coach Boyle to play it up straight.

"The game plan was to take away the three," said Cal Coach Joanne Boyle, who was content to let the Bulldogs guards drive and watched them fail to capitalize.

"We just missed layups," Fresno State Coach Adrian Wiggins said. "A missed layup deflates you as much as a three or a dunk inflates you."

And of course we have to talk about Ashley Walker, who dominated both sides of the court. Her statline of 21 points, 8 rebounds, 3 blocks, 2 assists, 1 steal doesn't do enough to reflect her dominance. Her presence in the paint actively seemed to bother Fresno State's drive game, which never got in sync with 21 turnovers.

Other notes from the game:

After the jump, Twist has his preview of Virginia. And again, this is the open thread for the game, tipoff at 9:30 PM PST, 6:30 PM EST on ESPN Classic and ESPN360.com! If there are stream links I'll post them in the comments. If you can't follow the streams you can check out the stat updates on Gametracker.

Look, we all know that Virginia is a great state. It's for lovers. It's for hustlers. And right now, it's for women's basketball.

(Include this link for the word Langoliers: )

But look, long story short, Virginia beat a school that may or may not exist called Marist. Here is some info on that.

Monica Wright wasn't about to allow an upset.

Virginia's junior guard scored all of her 13 points in the second half- including two key 3-pointers down the stretch-to push the fifth-seeded Cavaliers past No. 12 Marist 68-61 in the first round of the NCAA tournament on Saturday.

Ariana Moorer led the Cavaliers (24-9) with 16 points. Aisha Mohammed had 14 points and 10 rebounds, and Lyndra Littles scored 13. Virginia will face California in a second-round game in the Trenton regional on Monday.

The Cavaliers were playing without starter Britnee Millner, who was serving a one-game suspension for violating team rules. Moorer started in her place for Virginia, which was making its 23rd appearance in the tournament.Millner is a game-time decision against California.

I'll be honest. My knowledge of the University of Virginia is not particularily strong. I apologize for being less than perfect! But anytime we need more information on an upcoming team, we can always take a look at the game notes for the game (caution: PDF file). They have information on some main characters on the Virginia team, such as the Head Coach:

Some players to look out for are Monica Wright, Aisha Mohammed, and Lyndra Littles:

Aisha Mohammed, meanwhile, was named an honorable mention All-ACC selection and averages 12.9 points and 10.2 rebounds per game. She led the Cavaliers with 14 double-doubles on the season, and had 10 points and 14 rebounds in the first round against Marist.

Lest you think those blurbs are the sole information available about Virginia's key players, the Game Notes go further into detail:

• It marks the eighth time in school history that two Cavaliers have been named to the first team in the same year. The last pair was in 1996 (Wendy Palmer and Tora Suber).

• Wright leads the conference and ranks 13th in the nation in scoring at 20.3 points per game and is a finalist for the Wooden Award, the Wade Trophy and Naismith Trophy. The 5-11 junior ranks among the ACC's top-20 leaders in rebounding, assists and free throw
percentage.

• Littles missed nine games during the fall semester, but her 21.4 points per game scoring average would have led the conference had she played in the required 75 percent of her team's games. She returned in time to make her presence felt in conference play, averaging 22.7 points in 14 ACC games. The 6-1 senior also contributes 6.4 rebounds per game.

• Mohammed, a 6-3 center from Lagos, Nigeria, was the only league player to average a double-double and ended with 12.9 points and 10.1 rebounds per game. She posted 14 double-doubles throughout the season to make her career total 28.

Cal is a formidable foe for these Cavaliers. How have they done against ranked teams?

Virginia owns a 4-6 record against ranked opponents this season.

This is team that was literally in the middle of the pack in the ACC at 8-6. But the ACC, led by a staunch Maryland team, is a good conference and Virginia was 22-8 overall. And Virginia has some solid wins as noted above against teams like Maryland and Tennessee (who just uncharacteristically bowed out of the Tournament in the FIRST ROUND?!?!?).

This is a dangerous team with two powerful players in Wright and Littles. Both average 20 points a game! Our highest is Ashley Walker at 19 points a game. They have 3 players who average more points per game than our #2 player (Alexis Grey-Lawson), who has 12 per game. So, while many fans are anticipating that Cal might not make it past UConn in this bracket, hopefully the team itself isn't looking past the Lady Cavaliers. I have no doubt in my mind that Coach Boyle will keep them focused and if Cal plays at the level we know it can, we'll get that chance to lose to UConn! Go Bears!