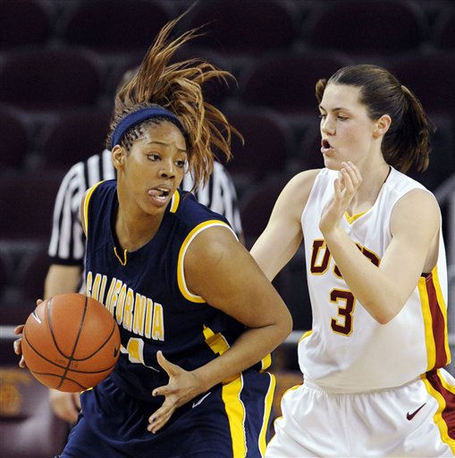 Tipoff at 8 PM EST, 5 PM PST, on ESPN2, should be shown in most regional markets. Learn more about Fresno State by checking Twist's preview from earlier this week!

The Bears' last tournament experience ended in disappointing fashion, getting upset in the second round to GWU. Clearly, getting to next week would be an impressive accomplishment, since they're likely to get bounced by the runaway Husky train if they manage it.

Their first round matchup against the Bulldogs probably brings great memories back for Ashley Walker.

In the most recent encounter between these two programs, Cal forward Ashley Walker dropped 31 points and grabbed 23 rebounds en route to a Bears victory.

I'm not sure how often 30-20 games occur in the women's game, but in men's basketball they happen close to never (even Dwight Howard, the strongest center in the NBA, has not hit the 30-20 mark once this season). Obviously Walker had to do much of the lifting with Hampton injured and Grey-Lawson off of surgery...but if you don't ooh and ahh at 31-23, then I don't want anything to do with you.

"They are an athletic, man-to-man team and we've seen that in the Pac-10 quite a bit, so we're familiar with them," Bears coach Joanne Boyle said. "It's good to have just a little bit of a taste of their style and their system."

You can probably expect Cal to do what they've done all season--pound the ball inside and wreck Fresno State in the paint, anchored behind Hampton and Walker. However, if the Bears expect to go deep in the tourney and reach the potential they showed earlier this season, they're going to have to start nailing their shots from the perimeter, quickly. Grey-Lawson, Lauren Greif and Natasha Vital have struggled with the stroke as of late. Once a team starts throwing all their bodies inside or straight up zones Cal, the sharpshooters are going to have start nailing shots from the outside. Hopefully, Coach Boyle has the Lady Bears ready to execute from mid-range and beyond. Keep in mind this tournament will exhibit Ashley Walker and Devanei Hampton's final games as Golden Bears. These are your last chances to cheer them on before they head off to the next level! Let's go Lady Bears!