Share All sharing options for: THE MADNESS: Cal vs. Maryland Open Thread 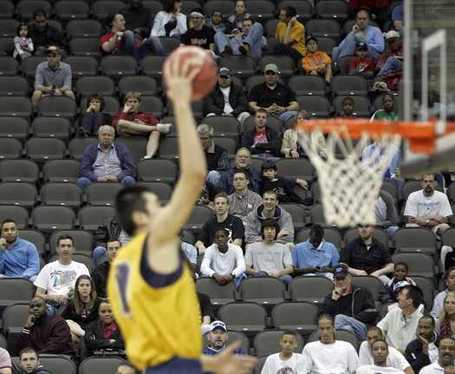 Cal was an early-season surprise, beating Utah, Arizona, Arizona State and Washington en route to a 15-2 start. But the Bears have gone 7-8 since then, including a loss to USC in the Pac-10 quarters in which they were outrebounded 53-27. They're a great 3-point shooting team without the toughness to match.

No matchup epitomizes the mediocre nature of this N.C.A.A. tournament more than Maryland versus Cal. Each is well coached but not particularly talented. Look for Maryland to win an ugly game that no one should go out of their way to watch.The Baltimore Sun:

Difficult game to pick. No doubt Cal can shoot and has faced and beaten some good teams (Washington, Arizona State, Utah). But I like the Terps in a close game because: *Maryland's defensive pressure and general intensity makes them no fun to play, particularly when you haven't encountered the Terps before. *The Terps have gained confidence as the year has progressed and were feeling good about themselves after the ACC tournament. Their play in that tournament suggests that they're a different team than they were in January. *The ACC is so rugged that it prepares you well for nonconference opponents, provided you've had a little rest.Kornheiser says we're going to get our brains blown out. 63 percent of the country thinks we're going down. And about a thousand other columnists, beat writers and what-not have Maryland going on, maybe even upsetting Memphis.

We get it. The ACC is tough. The Pac-10 is weak. Maryland is getting better and better. Cal is stumbling in like an Irish on St. Patty's Day morning. Vazquez is the next Ginobili. Randle isn't tough enough for the big strong Terps defense. East Coast>>>West Coast.