Let The Madness Commence (Round of 64 Morning Open Thread)

Share All sharing options for: Let The Madness Commence (Round of 64 Morning Open Thread) 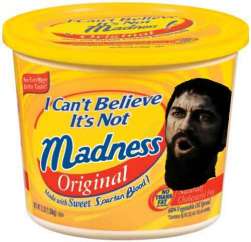 Schedule for the morning games (all times PST)-- If you can't get to a TV, catch all the action on March Madness On Demand!

This will take us into the Cal-Maryland game, scheduled for tipoff at 11:55 AM PST.

Since I literally started tinkering with my bracket around 11:30 last night and didn't finish until 4, and I know I'm going to lose to RemorsefulBruinBabe, I've resorted to the vice (and to some degenerates, virtue) of any sports fan to maintain a vested interest in an event: Gambling.

Picks in the early games: CSU Northridge +20 (this line should be 30), BYU -3. Not really invested in either of these, but I liked them enough.

And now the big ones for the entire tourney:

Six teams in the tourney, I'm basically hoping almost everyone wins their openers and/or someone goes deep. This is another fun bet that should be absolutely nauseating to watch unfold.

And now, the championship bets.

Gonzaga is the long shot I'm picking here to give it a go. No Adam Morrison to make fun of=me liking this team way more than I did the last time they were competitive. Add in a weak conference that they play in and no real gathered interest=me being interested.

UConn is a team I like simply because of the four #1 teams, they're generating the least amount of buzz. I know they lost a guard, but I'd rather have a college team flying under the radar than one that isn't.

And yes, I have Memphis winning my bracket. Again. We all know how well that turned out last time. I'm going to need therapy after this one.

Either way, the madness begins. You can start talking about your picks and who you think will win it all in the comments (if you're really paranoid, you can wait until after tipoff). And of course, discuss the games unfolding.