THE MADNESS HAS BEGUN! Kind of. Not basketball madness. Roundtable madness. In the dark of night, Avinash and I stole into Conquest Chronicles camp to liberate the Pac10 Roundtable. They had been holding the Roundtable hostage in a river of lava. And making all sort of insane demands like us self-declaring ourselves Sanchez. Like that's happening!

It was not easy. We had to fight off hordes of orcs, each one more CGI-created than the last. Plus, we had to save the Roundtable, while keeping free of the gaze of Paragon SC. He watches over the molten lands of Conquest Chronicles at all times. And every now and then comments about how difficult it is to access those bags of airline peanuts. 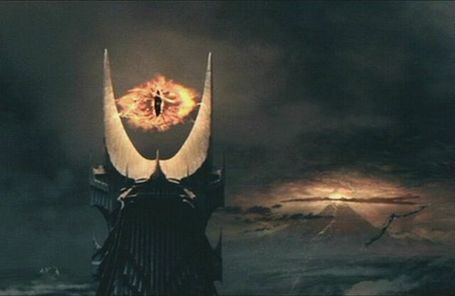 "Paragon SC is a big eye made out of fire and he is up in the sky there and he looks at things and then describes what he is seeing, because he's the world's worst observational comic." via vwt.d2g.com

But we did it! We got it! We got the Roundtable back. The Tyrant Boy King never fails!

This week's hypothesis: Which Pac10 team is going to go the furthest in the NCAA Tournament?

Addicted to Quack: Judging by the potential matchups, I'm going to have to go with Washington to make it the furthest. That being said, I'm having a tough time picking any Pac-10 teams to make it past the 2nd Round. Washington plays Mississippi State in the first round and if they get by them, they play would most likely play a Purdue team that they look to match up well against.

CougCenter: I hate to say Washington, since the rewarded my admiration last week by flopping against ASU in the Pac-10 Tournament, but it's hard to overlook the fact that the Huskies will essentially be playing home games in Portland. The first game is in the bag; Mississippi State, the conference tournament of perhaps the worst major conference in history, is terrible -- the Bulldogs were absolutely dismantled earlier this year by WSU. After that, they ought to be able to handle Purdue or Northern Iowa, especially with the crowd behind them. After that ... let's just say they better hope someone gets to UConn before they do.

CougCenter: That should be "Mississippi State, the conference tournament champion of perhaps ..."

CaliforniaGoldenBlogs: Well, I don't know anything about the rest of you mothershmuckers, but I'm certainly never listening to a single thing CougCenter ever says again. Not after this catastrophic mishap. To quote Dwight Scrute: "Apology rejected!"

ArizonaDesertSwarm: I on the fence between Washington and Arizona State. I think that both of them have the ability and matchups to make it to the Sweet 16. Everyone here has already broken down Washington's road, with "home" court advantage, so I will dive into Arizona State. They play Temple, who has Dionte Christmas (super freak), but not really anyone else to step up against the ASU caliber of play. Next up for ASU would be Syracuse most likely, a team who, like Arizona State, can beat anybody on any night. I just think that the matchup of ASU with Pendergraph and Harden playing against Syracuse's matchup zone is going to favor ASU. After the Sweet 16, ASU would draw Oklahoma and Washington probably Memphis. I would choose ASU here.

CougCenter: CougCenter: I just think it's plainly obvious that the NCAA committee got it right by selecting so many Pac-10 teams but seeding none of them higher than 4th. This is a conference filled with competitive balance, but every team has some major flaws that kept it from being a heavyweight. Could one of these teams get past the Sweet 16? Sure. But all of them could lose their first round game, too.

Conquest Chronicles (Laughing Stock): USC has a very strong chance to get to the sweet 16 with the projected matchups it has. The Trojans should open as favorites against Boston College, and I really like how we matchup with Michigan State as Taj Gibson has a decided advantage over Goran Suton and MSU likes to run half court sets which gives SC a huge advantage as Floyd will have plenty of time to set up the defense. The draw is really lucky too as both teams are way too highly seeded. Boston College is ranked 59th by Pomeroy and 57th by Sagarin (by scoring margin), and Michigan St. is ranked 13th by Pomeroy and 15th by Sagarin. Overall, extremely favorable seeding for USC.

California Golden Blogs: It is true that in a discussion of how far a team might go in the NCAA Tourney, it's important to look at how the team ended the regular season. USC fans are riding high now with their red hot team steam rolling through the Pac10 Tourney. A middle season slump seems 1,000 years ago. We even had a discussion in this very Pac10 Roundtable about whether USC would get in and came to the collective conclusion "HELL 2 DA NAW!"

Cal fans are feeling a lot less confident. They went 2-4 in their last 6 games, including getting creamed by ASU on national television. Interestingly, most Cal fans feel that Cal as a 7 seed won't stand a chance against their 2 seed. Yet, USC fans seem to think that USC as a 10 seed has a good shot at their 2 seed. Interesting dynamic there, the insecurities of Cal fans v. the arrogance of USC fans (not to call Laughing Stock arrogant, but he did attend USC, so....yknow, the shoe fits).

CougCenter: Funny that none of us are talking about the ultimate enigma, UCLA. VCU was a tough draw for them, but when they're playing hard, they can beat just about anyone. I stand by the statement that Washington will go the furthest of any Pac-10 team, but if there's one team I think that certainly has the ability to get past the Sweet 16, it's the Bruins. Anyone here think they can't get past VCU, Villanova and Duke? Outside of that first-round game, they might have the best draw of any Pac-10 team.

CaliforniaGoldenBlogs: UW got hosed with their matchup of Mississippi State at the 13th seed. They should be playing a midmajor. Instead they have to go through a capable Bulldog team before dealing with Purdue (dangerous team). If they get through all of that, they get UConn. Not an easy road.

Cal is in deep trouble after their first round matchup; they'd likely have to beat Memphis and Mizzou, and Mizzou TOTALLED them earlier this year.

Arizona has a decent chance to beat Utah, but after that their goose is cooked.

ASU got a death trap in Dionte Christmas and Temple in Round 1, and even if they survive that have to go through seasoned Syracuse to just escape the weekend.

USC has the potential to go as far as the Elite 8, but Louisville should end their run right there, and one bad day from a team that tends to underperform with their talent.

That leaves the Bruins, who have all the cards stacked in their favor. A public that has lost faith in their ability to perform on the big stage. A pessimistic fanbase where some Bruins fans "don't care about what happens to them" based on their effort. A relatively easy card (VCU, an undersized Villanova team that plays right into their hand, a Duke team that is their mirror equivalent or a Texas squad with so many deficiencies that are hard to name). They have a great shot at making it to at least next Sunday, and then they can throw all they can handle at a team who's never been there, whether it be Pitt, Xavier, FSU, etc.

Conquest Chronicles (Paragon SC)...I think UW and UCLA have the toughest road. UW for the reasons listed above. As was noted above, 'Nova can be beat and may even play right into UCLA's game but the game is in Philly and it will be a mad house, that's a huge advantage. I am not buying into UCLA falling to VCU as some pundits are saying. No disrespect, but UCLA, as much as I dislike them, plays big boy basketball. VCU has some nice pieces but they have never played a team like this, Howland will have UCLA ready to go.

I was surprised and thrilled that Maryland made it in. I am big Gary Williams fan and enjoyed going to the games when I lived in DC. I am taking this game as pick 'em. I would love to see Maryland win but I think Cal will shoot the lights out. But after the Maryland game they are finished.

I look at Arizona the same way...they can beat Utah but it will be a tough road to hoe after that.

ASU will beat Temple but will fall to Syracuse.

USC needs to be very careful with BC's Flex Offense...if they get caught out of position Tyrese Rice will light them up. If USC gets past BC they will likely face Michigan St. who many think is the weakest #2 seed. I am not prepared to look past the first weekend for SC until I see how the other teams in the bracket perform but I am not yet convinced that SC can get to the Elite 8. WVU and Kansas will be tough match-ups. Personally playing KU would be fun as I work with one of the players parents so it would be fun to have a little friendly banter.
Thats as far as I am prepared to go...

Conquest Chronicles (Laughing Stock): I think CGB brings up a good point with respect to how recent sucesses tends to cloud one's ability to accurately predict the future, but I genuinely think that both BC and MSU are over seeded. Just compare them to their peers, which is the worst of Boston College, Cal, Texas, and Clemson? The same goes for Tom Izzo's club, I think either Memphis, Duke, or Oklahoma would be a much more intimidating draw.
More to the point though, I hate to say it, but I think UCLA has the best chance to go the farthest. As Jeff N pointed out, they likely get VCU, Villanova, and Duke on their way to an elite eight appearance, and none of those teams really exploit any of the Bruin's more obvious weaknesses. If they do get that far though, I really doubt they get past Pitt. The Huskies have a good chance to get far too, and I think if they are able to get through the opening rounds that they have a good chance to take down UConn as they will have trouble matching up against sub happy Washington without Dyson. After Connecticut they would then have to beat Memphis, which is very doable but still a definite challenge. All in all, it seems unlikely that the Pac 10 will see anyone move on to the final four.

Also just to reiterate, ASU and Cal got screwed and Arizona doesn't really belong in the tournament.