People are always saying that we do too much "analytical" stuff here at CGB.  Not enough "human interest" stories.  So, in that vein, I contacted a friend of mine who attends University of Maryland.  I wasn't sure exactly what to expect, but thought she might have heard of the basketball team or maybe some of its players.

What I got was far better.  What I got was a far-reaching expose into the "wicked game" of one Greivis Vasquez.  And I don't mean his assist to turn-over ratio.

I first met Greivis when we had art class together.  Even as a freshman he was supposed to make Maryland great.  So ever since day one, he thought he was going to be the shit.  And look, there's no doubting that he's a good player.  But man is he cocky as hell.  He thinks he can talk to any girl on campus.  ANY girl.  He tries so hard.  I assure you, he cannot.

Every time he sees me he always asks me why we never hang out.  I'd like to think he can figure that out for himself.  I even tell him that to his face.  But to no avail.

I often see him at the bars.  He'll always buy me drinks.  I used to think I was special, but I quickly learned he will buy ANY girl drinks.  They'll take it, because they are, yknow, free.

Anyway, one time he was really trying to get me drunk.  This was a new concerted effort I hadn't seen before.  Buys me five shots to take.  Right in a row!  Of course, he's not planning on drinking anything.

After just a few minutes, he was all "Hey, so you ready to get back to my place?"  My response "You'll have to do more than buy me a few drinks to ever go home with you."  (TwistNHook Note:  SOMEBODY GET THE CHART!  WE NEED TO DETERMINE IF HE WAS TOLD!)

I found my friends and sketched off with them (TwistNHook Note:  I believe that is youthspeak for "leave").  We came back later to see the EXACT same thing happening.  Five shots.  Five shots!  To some slut in a tight leopard print dress.  But hey, I saw her walk out with him, so I guess his "charm" works on some people.  Her Valtrex budget will be going to go through the roof after that night.

One of my friends has a bad reputation among the football team.  She doesn't sleep around with them, but she does go out a lot with them.  She's often seen with many players, so assumptions are made and people talk.  Greivis knows this and he knows who she is, because he'd see us in the diner all the time together.

Last week, she's out at Fe and he goes up to her.  Here is the following exchange:

Undettered, he puts his number into her phone and then calls himself.  So desperate, so desperate.  He's started texting her, asking when he'll get a chance to see her again. He might be a great player on the court, he certainly ain't off! 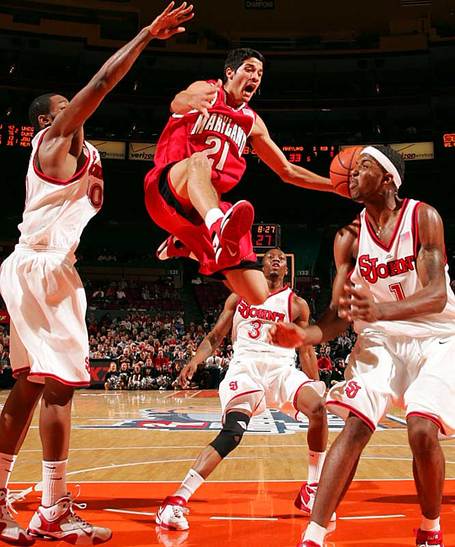 Wow, this guy makes me feel better about my own game.  Or at least what I remember of it.  2002 was a LOOOOOOOOOOOOOOOOOOOONG time ago.

BERKELEY - The California Golden Bears return to the NCAA Men's Basketball Tournament this week for the first time since the 2005-06 season when they travel to Kansas City, Mo., Thursday to take on the Maryland Terrapins in the first round of the West Region. Tipoff takes place 30 minutes after the completion of the Memphis-Cal State Northridge game, which begins at 9:25 a.m. PT.

The Bears earned a No.7 seed and will face 10th-seeded Terrapins at the Sprint Center in Kansas City on Thursday, March 19. The contest will be broadcast by CBS TV with the game time yet to be determined. The California-Maryland winner will face the winner of the Memphis-Cal State Northridge game Saturday CT at the Sprint Center.

California, 22-9 on the season, will be making its 15th NCAA Tournament appearance. The Bears are 18-14 in NCAA tournament games. This will be their first trip to the post season under head coach Mike Montgomery.

Cal will have approximately 200 tickets for Cal fans to purchase in the Golden Bear section at the site of its first-round game of the NCAA Tournament, and priority will be based up 2008 Bear Backer donation levels.

Donors at the Pappy Waldorf level and above will have an exclusive period to order tickets on Sunday, March 15, from 4-6 p.m. There will be a limit of 4 tickets per person.

If there are any tickets remaining, they will go on sale Monday, March 16, at 8:30 a.m. to current Cal men's basketball season-ticket holders, all Bear Backer donors at the Coaches Club level and above, and current Cal students (limit 1 per student).

Sales to the general public will start at 10:30 a.m. Tuesday, March 17, should any tickets be available.

BERKELEY - The following are quotes from head coach Mike Montgomery and players following their selection to the 2009 NCAA Tournament. The California Golden Bears will travel to Kansas City, Mo., to take on the Maryland Terrapins in the first round of the West Region.

On his players' reactions following the team's selection:
They were excited. It's new to them. Patrick Christopher said, "I've never watched this thing before," because they weren't in it and they really had no reason to watch. So, it was kind of a new experience for a lot of them, just sitting there, waiting for your name to be called and I think it was kind of fun. The Pac-10 gets 6 teams, that's great. The seeds were kind of middle of the pack - like UCLA, I was a little surprised - but it's good. Playing an ACC school, like Maryland, I've had some experience playing them, they're always very well coached. It's a major conference school that's done really well. I think it's all really good stuff for them. We had a good practice today and the kids are excited about it.

On watching Maryland:
I've watched them on television just when I get a chance. I know they've got one really good player that's very good offensively that has the ball in his hands a lot. I don't know much about them from top to bottom. I know [Maryland Head Coach] Gary Williams well. I know he's a heck of a competitor. I know that they'll play really hard.

On Gary Williams' teams from year to year:
I think they reflect his personality. He's a feisty guy; a little bit loony on the sidelines. But the kids always find a way to win. They always find a way to get into the NCAA Tournament. I know he's had some great teams. We played them with one of the best teams I had, and they beat us. So, you can always expect a very hard-fought, competitive game.

Do you have better game than Greivis?