Share All sharing options for: The Tales of Two Losses: Pac-10 Tournaments Recap

Postgame interviews can be found here. 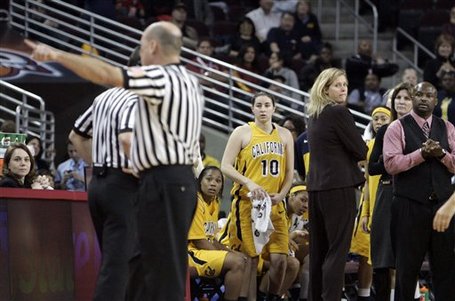 We've all had our say about what went down at the end of the women's semifinal, whether it was wrong or stupid, or incompetent or criminal. If you want the official NCAA rule, you can look at it here.

In any period, when the game clock displays 10ths of seconds and play is to be resumed by a throw-in or a free throw when 3/10 (.3) of a second or less remains on the game clock, a player may not gain possession of the ball and try for a field goal. Such player can only score a field goal by means of a tap of the pass or of a missed free throw.

Now you can argue that it's a stupid rule, that the Trojan coach lobbied and berated and influenced the refs, and that USC should be punished for putting a freaking guard on Ashley Walker so that the ball could be perfectly lobbed to her. However, that was the rule at the time, and they chose to interpret it as such. We can't control that.

Nevertheless, it's best it happened here and not a week later, and thus suffering a repeat of last season's fate. And it gives Coach Boyle and her team a chance to look inwards and figure out why it needed to come down to the final play in the first place.

For one, despite the final outcome, Cal did not play very well, again. The Bears ran a very methodical halfcourt set for much of the game, yet USC sent three, four bodies in the paint to body up Devanei Hampton and Walker (do illegal defenses get called in college?) and dared Cal to shoot from the outside. Which they did. With limited success (probably less than 20% of their points came from the outside).

But the real lapses were on defense. Several times in the second half Cal would score and USC would cherry pick for a wide open 3 a few seconds later. USC didn't have their center, so they played small ball, ran all over the half court, forced Cal's larger but slower defenders to keep on rotating to keep up with the change of pace. For the first thirty minutes, they had limited success.

Eventually they found plenty of easy shots either in the paint or uncontested from outside. These not only widened the margin but tired out the Bears more. They eventually had to go to a zone using the bigger lineup they had, leading to more wide open jumpers, drives and layups.

I was a little surprised Coach Boyle didn't try to incorporate a little small ball herself and put a smaller lineup on the floor for some period to not only keep up with the speedy USC guards, but also spread out the floor on defense. USC tried to shut down Walker and Hampton as much as they could--they still combined for 47 points and 28 rebounds, but it was a hard 47-28.

Notice that once the game sped up and Cal was able to get quick cuts into the lane or get crisp ball movement, the Bears fought their way back into the game. It made you wonder where the urgency was for most of the game, and where it's been for the past three weeks, where a once top 5 Cal team now will struggle to hold onto a 3/4 seed on Selection Monday.

I'm not going to get too critical of Joanne Boyle's coaching, but I get the sense that she didn't have a Plan B when Plan A was sputtering. She was set on the Bears winning on the shoulders of Walker and Hampton, and you have the feeling that this is going to be her blueprint going forward. What many Cal fans should be wondering going into the Big Dance is does she have the ability to adjust when Plan A fails?

Some brief thoughts about the men after the jump.

Just like the women, the Cal men came out sloppy, got outhustled and outworked. Obviously the Bears have been undermanned for most of the season, but to give up 23 offensive rebounds displayed the deficiences this team will face for the rest of the tourney. Their lack of presence inside forced the Bears to rely almost entirely on the perimeter, and when their jump shots didn't fall they got torched. It didn't hurt that they drew a talented USC team that punched its own ticket to the dance and might be the most dangerous team in the conference heading to the tourney.

So just like the women, the men had to grit and come back. And there was one huge positive that emerged out of the defeat: The player of the night, Jorge Guiterrez. 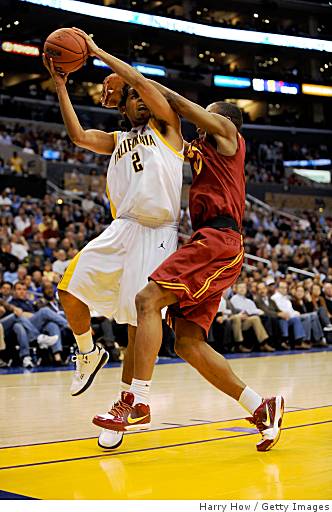 Without him we never tie that game. He's slowly emerging into a bona fide defender in the Bruce Bowen mold: scrappy, fearless, and someone that all opposing teams hate to deal with. It's always fun to have a player other teams hate. And we have plenty of more games to enjoy him.

Jerome Randle, Theo Robertson, and Patrick Christopher remain our nucleus going into the tournament of 64, and our success will ride heavily on their hot hands. The Bears will have to hope they can nail their jumpers and break down opposing zones with their driving capabilities, because the first team that stifles them will be sending them back to the Bay Area.

We do have an ace up our sleeve though: A wizard coach who's been here, and knows how to take his teams deep. Hopefully Monty can conjure up some March magic in our first trip back in years. We're going to need every bit of help we can get...starting with our draw.

(Just a note: Selection Sunday Open Thread coming about an hour before the show!)

So we have one team with a talented frontcourt, another team with a talented backcourt. Based on what you've seen from the two teams this year, who do you think will have the greater success going forward? And of course leave any of your own thoughts about the games, the teams, the players and the coaches.