The Cal-USC women's semifinal kicks off at 6 PM ET, 3 PM PT on CSNBA+. 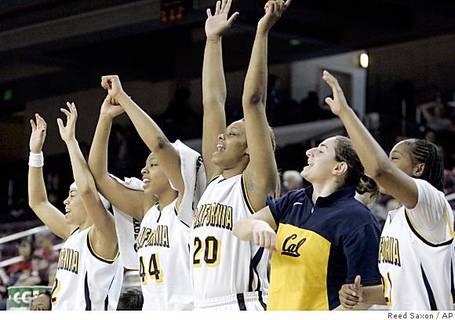 As expected, the Golden Bears romped the Huskies, and really didn't face much of a fight from them. Cal pounded the ball down low to Ashley Walker and Devanei Hampton, and neither had much trouble getting the ball in the hoop against much smaller Husky defenders. On the flip side, Cal's defenders were too strong and aggressive down low for anyone on UW to post up or get easy points in the paint, so the Huskies kept on shooting awkward jumpers. The Bears were up by 20 early in the second half and played out their second unit most of the rest of the way.

Jimmy Tran from the Daily Cal summarizes it well:

Walker finished with game-highs in both points and rebounds despite playing only 16 minutes. The recently named All-Pac-10 first team honoree had 14 points on 6-for-8 shooting and grabbed 10 rebounds.

Along with senior Devanei Hampton, Walker helped Cal establish a dominant presence down low in the first half. The two combined for 20 of the Bears' 31 first-half points.

Cal didn't shy away from the inside game in the second half and finished with 30 points in the paint. The Huskies, in comparison, had 18.

"That's just me and Ashley's game," Hampton said. "When we don't have double teams, that's like a green light for the both of us and we look for each other a lot."

The Bears' offense as a whole looked much different than it had in the two previous games against Arizona and Arizona State.

While it continued to struggle from beyond the arc, Cal repeatedly found open looks both inside and around the paint. The crisp execution on offense led to 50 percent shooting from the field--the Bears' highest since their game against Oregon on Feb. 21.

Cal's next opponent, USC, is coming off an upset of the Sun Devils, but there might be something more to it...they ARE playing on USC's campus. However, they will be without center Nadia Parker, who suffered a sprained knee against Oregon State and will not be available for this tournament. USC rained 10 3s on ASU to hasten the upset, so Cal might have to lock down on the outside rather than the inside, especially if they continue to struggle with their perimeter shots.

California and USC have played their two matchups closely this year with Parker in the lineup, and both times the Bears have won. By two. Each time. This certainly has the potential to be another tense affair.

This game will be televised on Fox Sport Net; since there's a Sharks game in the Bay Area, it should be on Comcast Sports Net Plus. In his first act back from retirement, Hydrotech will again be monitoring channel 99 in case of emergency.