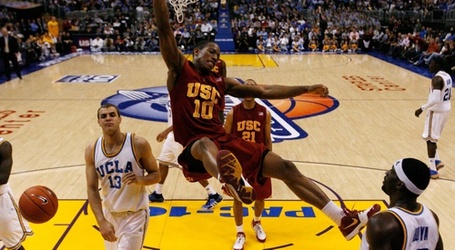 This game is interesting from the standpoint of USC since if they win, they're in the dance. ASU is pretty much locked in, so I doubt winning this will mean that much to them. (For those who care about such things, ASU is 1-2 point favorites at most sportsbooks)

You kind of (and I stress 'kind of') root for USC to win so the conference can get five teams in the tourney. They have such good athletes in Gibson and DeRozan that if they got hot, they could make a run in their bracket with some upsets and make the conference look pretty good. Of course they don't play so well as a team; UCLA shot the ball like they had broken glass jammed in their eyes and the Bruins were only down 6 with a minute remaining.

Arizona State, with Pendergraph and Hardin both relatively healthy, and their flop-happy guard Glasser, seem to be the best organized team in the Pac-10. They dominated the Pac-10 champion Huskies for much of yesterday's game, let them have a brief run to take a slight lead, then dominated them some more. Of all the Pac-10 teams they probably have the best chance to make some noise. Yet it wouldn't surprise me if they got bounced early either. Every team in the conference has a weakness.

For those not interested in the men's game, you can speculate in the comments: Who do you feel has the best chance in the conference to go deep in the tourney? Cal has the jump shooters, USC (if they win) has the talent, UCLA has the tradition, Arizona State has the complete team, Washington has the pieces, but who's got the potential in them to make a run?