There are several games occurring today as listed below:

These are the afternoon games and are being broadcast, according to the Pac10 Website, on FSN.  For those in the Bay Area, that is Channel 40 on Comcast.

Use this thread to discuss those two games.  But let's also discuss our favorite  Pac10 Tournament moments.  Now, I'm not old enough to remember the first installation in the 80s, so my memories all come from the most recent incarnation.

Unfortunately, I was only able to watch half of Cal-Oregon in 2006.  But it was the second half (plus OTs), so what a half it was!  Plus, if you remember correctly, Cal was down big at half.  But Powe, who ended up scoring 41 points, powered us back in!  Ubaka hits key free throws down the stretch to stymie the Ducks.  I remember the Ducks kept hitting desperation 3 after desperation 3 to put them right back in it.  But they kept fouling Ubaka!  What foolishness!  Ubaka was 8-10 on free throws!

Here are our two main guys celebrating after the key victory: 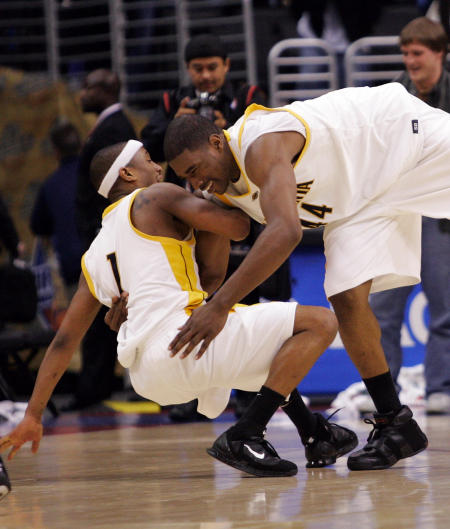 Unfortunately, they were so tired out that UCLA made easy work of them in the Championship game the next day.  Either way, hopefully we'll see tons of Cal smiles this Pac10 Tournament!  What's your favorite Pac10 Tournament moment?