But that's your 2008 UCLA Bruin football squad for ya! Their passion bucket, not quite as "runneth over" as the basketball team.

And to make matters worse, it was Cal doing its best Kevin Craft impersonation with 14 turn-overs on the day (and, IIRC, 12 in the first half).

1. PC has 16 points on the day. Certainly, not a bad offensive day against a rugged UCLA D, right? But IIRC, he scored about 11 of those in the earliest part of the game and then got 2 quick fouls. So, for the vast majority of the game, he scored 5 points.

3. Finally, Dragovic's facial hair leads me to believe he has a large store of roofies somewhere in his house. He must be an extra from Deuce Bigalow 3: Eastern European Adventure. And what's up with the accent over the C? I'm going to need a guide as to which consonents do and do not allow accents over them. Soon, we'll have tilde's over Ls and umlauts over an S. I can't handle this modern work a day world. 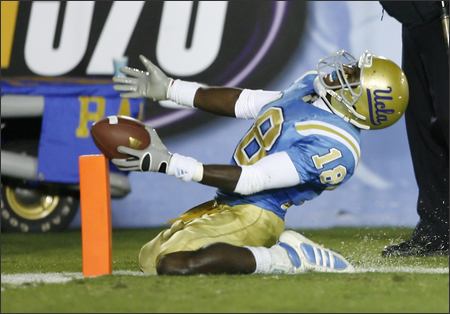 Also, don't forget, there is also the woman's game today against UCLA. Cal is coming off of a brutal, but significant victory over USC. Win out and Cal would win the Pac10 title! Here is the broadcast information:

And behind the fold, there is more information regarding the UCLA woman's team.

SCOUTING UCLA The UCLA Bruins are also trying to erase the memory of a stunning upset, theirs coming at the hands of Washington in Seattle last Friday in a game without their leading scorer, Doreena Campbell.

The Bruins are a strong rebounding team, ranked second in the Pac-10 and No. 8 in the nation in rebound margin, outrebounding their opponents by an average of 9.7 per game.

In the first meeting of the season between the two teams, the Bears trailed, 23-22, at the half, but opened up the second period on a 7-0 run. Ashley Walker's 17 points fueled the comeback with the Bears outscoring the Bruins 42-25 after halftime. Devanei Hampton had a double-double with 11 points and 12 rebounds. The Bears outrebounded the Bruins 36-26 in the game.