Share All sharing options for: A Total College Football Reorganization

Every so often, some college football blogger/pundit comes out with a brand new plan to reorganize college football and thus fix all of the imbalanced problems that currently plague the sport.  Perhaps the Pac-10 should expand to 12 teams, or the Mountain West should poach the best of the WAC and move up to become a 7th BCS-level conference.  Notre Dame should join the Big 10, the Big East should, I dunno, absorb some more of Conference USA, while the Sun Belt...well, the Sun Belt should be banished back to Division I-AA.

These scenarios, while ranging from 'unlikely' to 'completely implausible', sure are fun to talk about.  But rarely have plans been put forth as radical as mine.  Inspired in part by this FanPost by carp, I sat down and started playing with moving some teams around into different leagues; from there, things just kept growing and evolving until my reorganization plan had engulfed the entire country.  If I were granted absolute power over Division I-A football, this is what I might do.

Luckily, numbers worked out in my favor, as the country contains exactly 120 Division I-A teams, which split nicely into 10 12-team conferences.  So, here's what I tried to do:  I tried to keep conferences as geographically compact as possible.  Current conference affiliations were considered mostly irrellevant, though I tried my best to preserve current rivalries within the same conferences, if not the same division.  I also tried to keep most states' schools together, though some states, such as Iowa and West Virginia, do not currently have strong intra-state rivalries, and when the numbers determined that they must split, I didn't bother too much about it.

Anyway, without further ado, here's what I came up with: 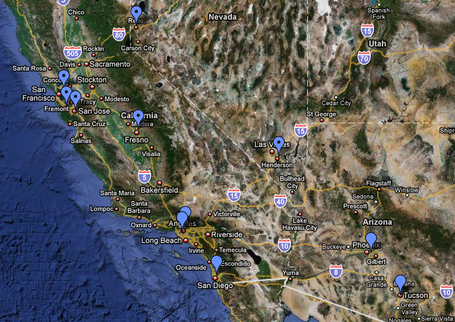 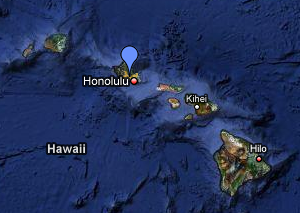 Geographically speaking, this grouping makes the most sense -- moreso, even, than the current Pac-10 arrangement.  Perhaps the South Division is a little dominant, but it's not horribly unbalanced, and if you pair San Diego State and Hawai'i, everyone has a fairly natural rival.  (And really, shouldn't SD State and Hawai'i be rivals anyway?  They should duke it out for who can spend the most time on the beach and the least time in the classroom.)

As a Cal fan, I'm not relishing the prospect of visiting Fresno every other year, but a visit to Honolulu every 4 years or so sounds mighty enticing.  Overall, a compact, nifty arrangement, and not too many real rivalries are broken up.  Oh, and another bonus:  by putting all these schools together, it helps keep other conferences from raiding California and Arizona for Division I talent. 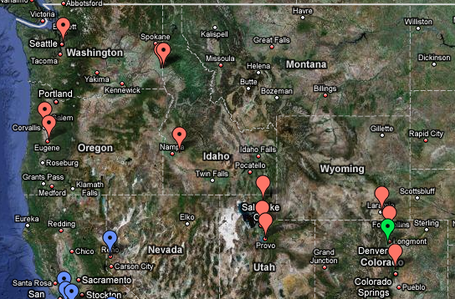 The West Division (encompassing Oregon, Washington, and Idaho) is a natural fit together, and pretty strong, too; they should be the dominant force of this conference.  The East Division, however, is less satisfying.  Yes, it's basically a fairly competitive composite of Mountain West teams (4 went bowling last year), but with 3 teams in Utah, 3 in Colorado, and 1 in Wyoming, 1 team from these 3 states was going to get left out.  Unfortunately, Colorado, a current Big 12 member, was the easiest to justify leaving out, and so they get pushed out to the Plains conference.  An unsatisfying solution, but there it is. 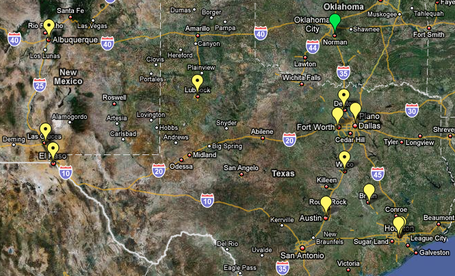 I think this conference works out pretty well; 10 teams in Texas, plus 2 in New Mexico makes a nice, even 12.  Maybe it's just me, but the prospect of an all-Texas league intrigues me a lot.  The division of this conference, however, is less clean.  The 4 western teams group nicely (and gosh, Texas Tech is isolated from everyone -- heck, they're several hours from the nearest interstate, which is hard to do in America outside of Alaska), but who should I toss over there with them?  I wanted to keep the Dallas/Ft. Worth pair (SMU and TCU) together, so it was either them, or the misfit pair of Baylor and North Texas.  In the end, the Bears and the Mean Green won out, for the flimsy reason that Baylor already has a misfit rivalry with Texas Tech in the Big 12, and keeping that together was better than nothing. 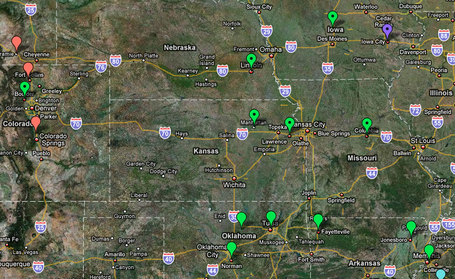 Having failed to keep Colorado in the west, I now had to group the Buffaloes with the rest of their Big 12 North brethren.  I really wanted to try and unite Iowa, trying a number of combinations (including trading Iowa State for Illinois to pair with Missouri), but in the end, keeping the entire Big 12 North intact (the only conference or division for which I managed that) was the best compromise.  Honestly, there just aren't that many schools (or people!) in this region of the country, so my options were pretty limited.

In the South, I took the Oklahoma schools and grabbed whatever was left over.  Taking Arkansas from right across the border was natural, and once I had Arkansas, Arkansas State made sense (though I was honestly surprised to learn that Arkansas State was a Division I-A team).  Finally, with the Indians in the fold, Memphis was right there for the grabbing.  It's actually a surprisingly compact division, though a conference that pairs Colorado with Memphis does seem a little ... stretched. 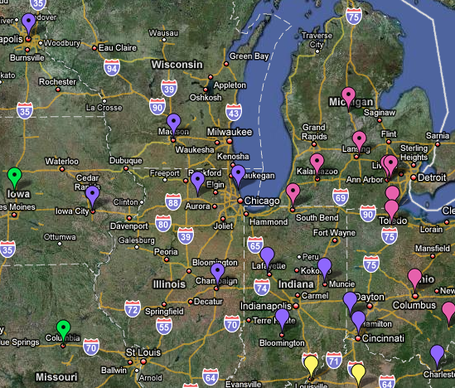 If you take the Big 10 and the MAC, smush them together, then split them down the middle, you pretty much get the next two conferences, with maybe a couple teams shunted off to the Northeast.  The West Division came pretty naturally, pairing Minnesota, Iowa, and Wisconsin with the 3 Illinois schools.  The East, however, was more vexing.  Basically, I ended up forming the Michigan / Ohio conference, and then the Great Lakes East Division got whatever was left over.  It's not a terribly unrealistic grouping, although Marshall is a bit out of place, but it is pretty weak.  This could turn into a pretty good basketball conference, but I think this is the weakest of the football conferences that I came up with, and the East Division in particular is lacking anything resembling a football powerhouse.  The prospect of an Iowa-Cincinnati conference championship game is, to say the least, hardly enticing. 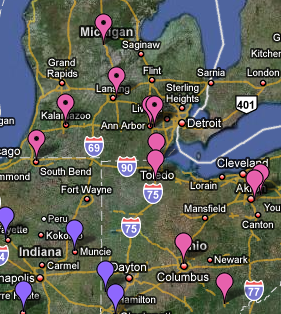 The Michigan Division may be my favorite creation in this whole project, precisely because it's so simple and makes so much sense:  take the 5 Michgian schools, toss in Notre Dame (huge rival, right across the border), and wonder why no one ever thought of it before.  Sure, it may be tough for the directional Michigan schools to ever compete on a regular basis, but I'm sure getting home games from Michigan and Notre Dame will be nice compensation.

Of course, once I created the Michigan Division, I had to somehow keep Ohio State in the same conference, at least.  I just couldn't separate them.  Problem is, Ohio State is smack dab in the middle of a bunch of cruddy MAC teams, and there just isn't a whole lot around to pair them with.  I experimented with several different combinations (including a 'Rust Belt Conference', with Penn State, Pitt, and West Virginia that I liked very much), but in the end, I sucked it up and put Ohio State with 5 other Ohio teams, all of which suck to varying degrees of suckitude.  Well, I suppose the Buckeyes will enjoy the conference championship game against Michigan or Notre Dame. 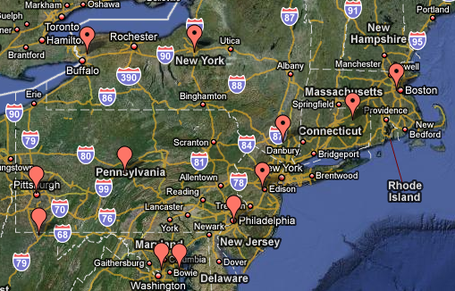 Here's another conference that I think was a long time coming.  Really, this is the conference that the Big East should be.  Boston College was such a natural fit with UConn, Syracuse and Rutgers, I don't know why they ever wanted to leave.  And the West Division has some real beef to it, with Pitt, West Virginia, and Penn State all solid teams, and neither Maryland and Navy any slouch either.  Also important to this conference was keeping Army and Navy together.  One of my favorite conference creations.

This conference gave me the most trouble, probably because it's right in the middle of the Eastern half of the country.  So many directions I could have pulled these teams.  In the East, the main priority was to keep the Tobacco Road schools together, and then pair them with another couple of teams.  The Virginia schools were obvious candidates, but then I had to find something to do with East Carolina, who was just sticking out like a sore thumb.

Meanwhile, the West Division consisted of a bunch of leftover teams in Kentucky and Tennessee.  Throwing Virginia Tech over there felt extremely forced, but the other option was to pull Tennessee out of the South Coast Conference, then stick the South Coast with East Carolina.  I really, really wanted to keep the Vols together with Georgia and Florida, even though it made for the most ridiculously strong division in the whole country, but in the end, swapping Tennessee and East Carolina solved too many other problems.

I don't love my final solution, but it's growing on me (putting Duke and Vandy in the same conference seems like a nice bonus, and pairing Louisville and Kentucky just had to happen), and just imagine this as a basketball conference! 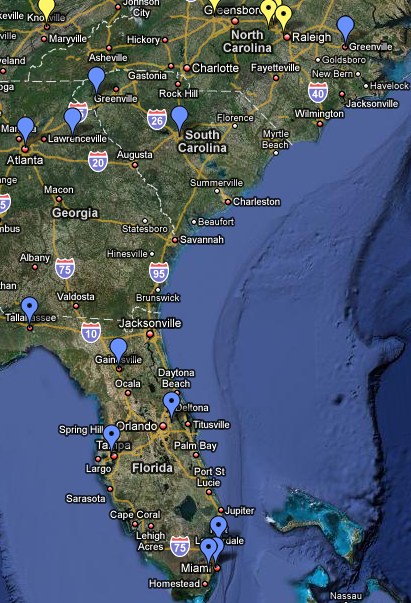 7 teams in Florida, only 6 to a division...who to leave out?  Well, geographically speaking, Florida State was the obvious candidate, but I decided to keep FSU in the South to pair with Miami, and shifted Florida to the North to be with Georgia and South Carolina.  Even though I didn't manage to keep Tennessee in the South Coast North Division, this is still a ridiculously tough division, maybe the most competitive in the country.  East Carolina doesn't really belong in this conference, but then, they don't really belong in *any* conference, so sticking them in as the final oddball to balance the numbers works OK for me. 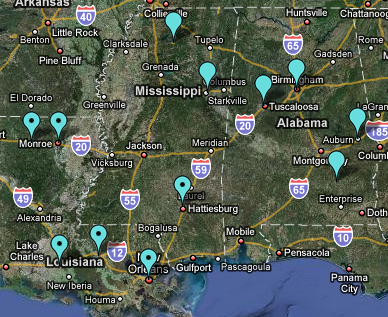 Louisiana, Mississippi, and Alabama make an even 12 teams, composing one complete, compact conference in the deep South.  Yeah, LSU's West Division is pretty weak, but that's the fault of the other teams in Louisiana.  I like this conference a lot, and it's such a natural fit that I was never tempted to mess with it to fix the problems with adjacent conferences.

Well, when all is said and done, we're left with 10 conference champions.  Perhaps they meet like this:

Every major bowl is located within the boundaries of the Southwest, Tex-Mex, Deep South and South Coast Conferences, so I'm not sure where the two Great Lakes powers should meet.  The Motor City Bowl?

So, 5 major bowl games, 5 champions of their region of the country.  Too many for a playoff, I suppose.  So screw it.  No playoff!  Writers and coaches can argue about who is best.  Teams can lobby for votes or whatever.  Controversy reigns supreme!

What do you think?  What would you do?  How would you arrange these teams?  Could you solve the problems I posed without creating worse ones in the wake of the solution?  Can you think of a feasible way to play-off 5 regional champions?