Note:  This post was written jointly by CBKWit and ragnarok.  Try and guess who wrote what!

After the losses to Stanford and USC, CBKWit said that sometimes, despite your best efforts, the other team makes their shots and there's not much you can do about it.  Now, those games were much closer than last night's win, and I don't think that Cal had nearly the number of lucky breaks and bounces that the 'Furd (Mitch Johnson shot-putting a jumper which hits front iron, somehow bounces up and comes down through the cup) and SC (their European player doing a volleyball set as he falls backwards for a bucket) had in their wins.  Still, Cal was absolutely scorching down the stretch, hitting (by my count) 21 of 30 field goals for 70% in the final 17 minutes of the second half.  A lot of the buckets were good, open shots, but Randle hit a couple of off-balance jumpers coming off curls, Theo hit a 25 footer with a hand in his face as the shot clock was winding down, and when Jorge absolutely bricks a runner in the lane, only it hits back iron and rolls down...well, it's probably your night.

There's lots of credit to go around for last night's win, but if there's any doubt about who is the most important player on this team, let me clear that up right now:  Cal will go just about as far as Jerome "The Bulldog" Randle (yes, that's how the PA announced introduced him) is able to take them this year.  Plenty of others on the roster contribute a good deal, but Cal is least able to afford an off-night from Randle.  When he's on, Cal looks like they could beat just about anyone in the country; however, if he gets flustered or sloppy or tired, Cal just is going to have to suffer, as letting Guttierrez or Knezevic handle the ball for extended periods of time is just not going to cut it.

And when Cal needed a comeback last night, Randle was Johnny-on-the-spot.  Down by 9 at one point, Randle and Jordan Wilkes combined the bring the Bears close (with Wilkes contributing several nice moves inside, and Randle adding a huge 3 to cut the lead from 7 to 4).  Then, down by 2, Randle reeled off 6 straight points to give the Bears the lead for good, including a crazy, coast-to-coast dribble-drive-behind-the-back-spin-and-layup that absolutely sent the crowd into its largest cheer of the night.  All told, the Bears went from down 7 to up 4 between the 16 and 12 minute marks of the second half, and Randle scored 11 points during that 17-6 run.  It was a lead they would not relinquish.

Of course, Randle may have his detractors.  While Randle was shooting two free thows to give the Bears the lead for good, one of the guys behind me started saying "Hi, I'm Jerome Randle" in a high-pitched, Mr. Hankey from South Park voice.  It was kinda weird.  "Howdy-ho, I'm shooting free throws!"  I have no idea what that was about.  Personally, I think Randle bears a pretty decent resemblance to Rickey Henderson, especially when he's angry. 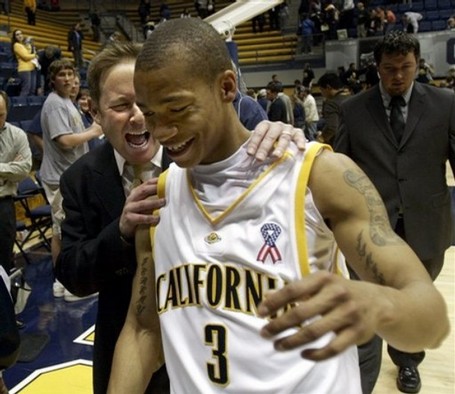 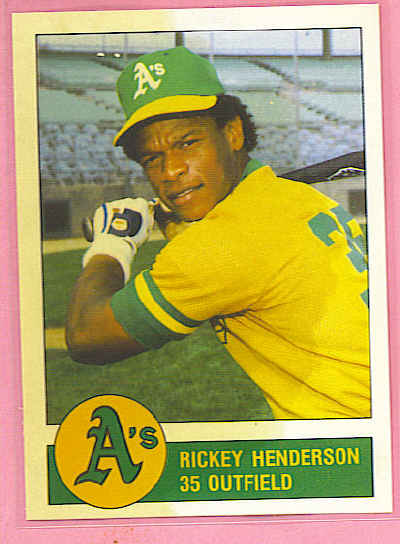 Actually, the guys sitting behind me were pretty entertaining; they kept up a steady stream of ridiculous commentary all game.  Though ostensibly Cal fans, they also disparaged Harper Kamp, sarcastically referring to him as "Offensive Powerhouse".  "Oh look, the Offensive Powerhouse is in the game.  Great!"  Right on cue, however, Kamp lays in a feed from Randle on a nice baseline cut, which shut them up pretty good.

Theo Robertson did a great job hitting his jumpers throughout the game, but the score would have been even more lopsided had he been able to contain Quincy Pondexter, who abused Theo for 21 points and 6 offensive rebounds.  Theo is a smart, fundamentally sounds player with a great shot, but he is not very athletic and the Huskies exploited this last night.  Great offensive performance for Theo, but giving up the same number of points to his man to go with only 2 rebounds isn't a very complete game.

That said, I think the most exciting play of the game was his 3 point play on a back door lay-in and subsequent free throw.  Randle had been terrorizing the Huskies on pick-and-rolls on prior possessions, so the Husky defenders were a little jumpy to get out on the perimeter.  Cal exploited it beautifully and Theo had the left half of the floor all to himself as he coasted in for the lay-in.  I jumped out of my seat and did a spastic little fist pump while shouting "Beautiful! Beautiful! Beautiful!"; 20 seconds later, I received a text which simply said "Beauty".  This play almost doubled Cal's lead, from 4 to 7 points, at the midway point of the second half, and the Huskies would get no closer than 5 the rest of the way.

However, as good as the Bears' offense was (and it was fantastic in the second half, with stretches where the Bears made 10 of 12 baskets and then 9 of 11), I was also impressed with their defense.  Patrick Christopher finished with only 3 points on the night (giving him exactly 1,000 for his career), but he was a big reason why the previously red-hot Justin Dentmon hit only 3 of 12 field goals.  The Bears' second half run was fueled as much by their defense, particularly on Dentmon and mini Isaiah Thomas, as by their offense.  Cal did a great job of trapping the Husky guards once they got past the Cal perimeter defense, and Thomas especially often found himself without his dribble, in the key, surrounded by Golden Bears and without a good place to pass.

The Bears were also able to stymie Jon Brockman, at least on the offensive end.  Brockman (or as the guys behind me alternately called him, "Jon Brickman", then "Brick Wall", and finally "Brockles V. McBricksworth") never once got a clean look at the basket, and he scored all 4 of his points on free throws as he went 0-4 from the floor.  Yeah, he got 15 rebounds, including 6 on the offensive end, but I thought Wilkes, Kamp, and Jamal Boykin all did a nice job harassing Brockman and marginalizing his impact.  The Bears continually doubled Brockman, forcing him to pass back outside time and time again, and that's not how the Huskies win games (they were 2-12 from three last night). 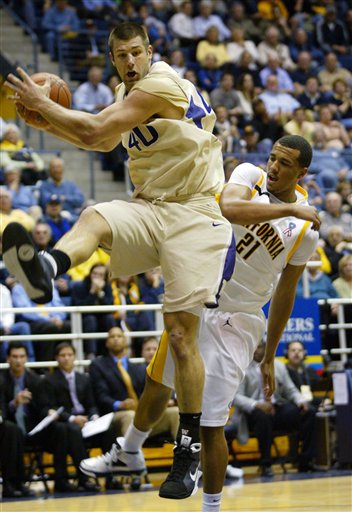 I believe I read somewhere that Brockman is UW's all time leading rebounder.  It seems like he has been around forever, because he's been a good player for the last four years, but for all his virtue and achievement, Cal has really had his number.  Two or three years ago, Cal beat UW when forced, by injury, to use Mr. Theo Robertson to defend Brockman in the post.  Giving up 30 pounds to the opposition's star post player isn't typically a formula for success, but it worked against Brockman.  Even in last year's loss to the Huskies at Haas Pavilion, it was Joe Wolfinger, he of the whopping 82 minutes played this season, and not Jon Brockman who dominated Ryan Anderson.

Still, the story of the game was the Bears' offense finally coming back to life.  Against USC, they couldn't get their jump shots to fall, and against UCLA, they couldn't even hang on to the ball long enough to get off a shot, but Thursday night vs. U-Dub, everything seemed to click.  Jordan Wilkes followed up his career night at USC with another impressive game, scoring 14 points on 6-9 shooting , grabbing 8 boards (inlcuding 6(!) on the offensive end), and adding 3 assists, no turnovers, and a block.  Where has this guy been all his career?  Jump-shooting teams will run through hot and cold streaks, but if Wilkes can consistently come out and give the Bears something in the post, perhaps the Bears will weather future cold streaks better than they did over the past 3 weeks.