Last week Ragnarok posed the extraordinarily controversial thesis, "TwistNHook Ain't So Great." Lots of scholarship on this issue instantly arose. I thought I'd use this Roundtable to discuss that age old question. Is TwistNHook Great? Or is TwistNHook merely good?

One view was that TwistNHook was just like Mick Foley, who, I have read, is good. 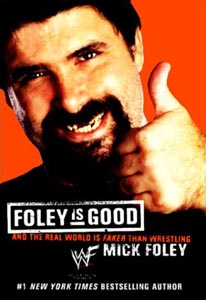 They said TwistNHook could take many chairshots to the head and be chokeslammed off many cages. Far more than Mick Foley ever could. And he could really take a chokeslam off a cage!

Others felt that TwistNHook was not just better than Mick Foley, but I was, in fact, great. As great as Brock Mansion. 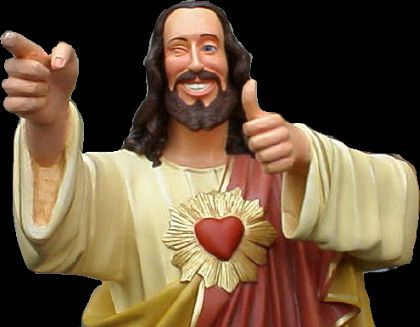 We clearly know what camp Ragnarok falls in. He doesn't believe TwistNHook to be the Most Gracious, The Most Merciful, The Ever Forgiving, The Ever Providing, The Lord and Cherisher of Worlds, The Self Subsisting (upon whom all creatures depend for sustenance), The Eternal Lord (who never dies), or even The Supremely Wise.

Well, ok, he probably does think TwistNHook is the Supremely Wise and the Cherisher Of Worlds. I know I do!

But enough about Ragnarok, we've been talking about him way too much this Roundtable so far. Back to TwistNHook. Nobody has mentioned him yet. We can't speak enough of TwistNHook. Oh and the Roundtable questions. We should probably answer those. Yknow. After the fold. *bemused eye-raise*

1. B-Ball: It is probably not going to happen this year, but how long until you think OSU will be competitive and make a tourney or two?

Ragnarok: Y'know, I would dispute the notion that Oregon State isn't competitive right now. Are they going to a tournament this year? Probably not, though I would put more of the blame on their poor showing in the nonconference portion of their slate. However, they are certainly rising at the right time, taking advantage of a down year in the Pac-10. The conference was absolutely loaded last year (9 teams went to some sort of postseason, and a ton of players were drafted to the NBA), and the Beavers were clearly outclassed, but I'm skeptical that their resurgence isn't due as much to the rest of the pack taking a step back as to OSU taking a couple steps forward. The Pac-10 should return a bunch of young talent next year, so I would anticipate the league getting better, perhaps slowing down the resurgence under Craig Robinson, but right now, the Beavers in a postseason tournament in 2011 is an entirely realistic proposition.

2. Four Pac-10 schools have first-year head coaches this season. At the halfway point of the Pac-10 season, it seems as if OSU's Craig Robinson is faring the best. How long do you think he stays in Corvallis?


Ragnarok: Planning on leaving already? He just got there! I know Corvallis isn't anyone's idea of a basketball "dream" job, but Craig Robinson doesn't strike me as the type of guy who always has his eye out for the next job. If things really go well for the Beavers, I could see Robinson leaving after season 4 or so...but I could also see him fired after season 5. It's a tough job, and while things look great for him now, counting such chickens now seems excessively premature. We'll have a much better idea where this program is headed at the end of next year, when we can say whether Craig can sustain success, whether he can recruit, and whether he can coach those recruits.
3. (To be answered after signing day) Which one football recruit in your schools incoming class has a chance to make an impact for your team next season?
TwistNHook: Why listen to me prattle on when we have resident expert Thoroughbred on this very subject:

If Isi’s HS prowess translates to the Pac-10, he could be back immediately on PRs in order to keep Syd healthy. I don’t see him being a slot receiver until he has way more practice.

Since Markish is a 3-for-3 guy, there is really no use in redshirting him, so if he comes in and shines like he did toward the end of this season at Compton CC, he could be in the mix (and definitely if Calvin and Jones aren’t fully up to speed).

There is a video just posted on Rivals that ‘confirms’ this. It has a recording of a phone conversation, but the words are really hard to make out. It seems like he was really turned onto the program because HS teammate Jerome Meadows has committed to the Bears. He really enjoyed the coaches and players on his visit last weekend.

Markish is a former 4-star recruit from 2007. He was the South Carolina state champ in the 100m, 200m, long jump, and 400m hurdles (not sure about the last one, but definitely the first 3). In his HS films, he’s pure, unadulterated speed. When he finds the seam, he turns on the jets and won’t be caught. It’s also been said that he has sensational hands too.

The best part about Markish: he has three years to play three seasons. When he was at his first CC in Kansas, he only participated on the track team.

There were some questions about whether his units from the Kansas CC would be able to transfer to Cal, and that seemed to be the source of these complications on NSD.

Sofele has some very interesting qualities in his game. He gets to his top gear with very few steps (think full speed after step 2). This is something you see out of very few players, probably only Jahvid Best on the current roster. Whether he actually has elite top-end speed is inconclusive because of the competition he faces, but he was never caught from behind on his HS tapes. All this said, he has tremendous agility and hip movement and he wows you on tape with some of the Houdini acts he pulls.

I actually don’t think he is anything like Quizz. He won’t be pulling piles and out-leveraging defenders. There is little room for him to add bulk to his frame. He’ll be a player for whom Tedford and Cignetti design a few specific plays. Most likely screens to the slot receiver. Also, his brand of athleticism lends itself to punt returning, as he gets up to speed quickly and can use his blocks well

4. Grade your university's hoops team based on pre-season expectations... What went right? What went horribly wrong? What has been surprising?
TwistNHook: I think for most people, Cal's success has been surprising. There have been some people to say their record so far is disappointing.
But, independent of the merit of their arguments, they appear to be, for right now, in the minority. After years of Braun's brutal mediocrity, just good enough to give us hope, bad enough to always snatch it away, any seeming modicum of success is exciting for Cal fans. Now, certainly there are problems with this team. With Anderson and Hardin leaving for the NBA, Cal's inside presence has been woeful. We have turned into the GSWarriors. Fast break points. 3s. If our 3s are falling, then we can run with anybody. But if we are just jacking up bad 3s and our guards are getting stripped on every possession, it..........is not as good.

In recent games, due perhaps to injuries to Jerome Randle, it's been more the latter than the former. But hopefully with some home cooking, Cal can regain its early season brilliance in the latter parts of the season. Cal just needs to focus on doing the fundamentals correct. Not turning the ball over. Staying competitive in rebounding. And taking strong shots, instead of just jacking up 3s. I believe in this team. Hopefully, all will end well.

5. College baseball has gotten a lot more pub the last few years from national media outlets. The upcoming season will mark the first time in 26 years that the Pac-10 will actually have 10 teams competing in baseball. Tell us why you are happy to see Oregon fielding a baseball team for the 2009 season!

TwistNHook: Well, mostly to see 10 teams. That is always an exciting to have all the schools competing.

But heres the #1 main super important crazzy reason. The uniforms. Giving Nike another sport to create uniforms for is like giving Michaelangelo another Chapel to fresco. Speaking of which, we should get that pizza loving turtle in on the Hall Of Riley. He could do wonders!

But back to the geniuses at Nike. Let's see if they were able to capture their absurdist, Albert Camus-esque design views in a baseball uniform: 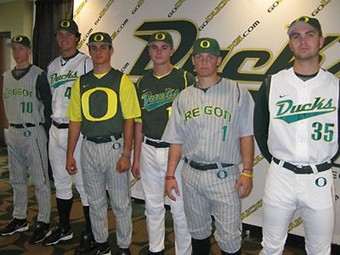 I think I speak for Albert Camus when I say NAILED IT!

So, there are our answers, what are yours?

Also, here are the SBNation Blog rankings of the Pac10 BBall teams: