Share All sharing options for: Pac10 Roundtable: A New Hope

A New Hope that unlike A New Hope this updated, modern Roundtable won't suck. There's a lot less Jar Jar, but a lot more Conquest Chronicles. So, I guess that evens out. 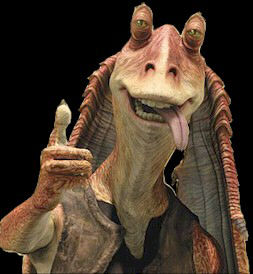 "CRN told me to bet on the over!" via www.qctimes.com

Instead of having each blog answer 5 questions, we'll do a more modern style of Roundtable. Where we have a hypothesis and then get together to discuss it. There are many blogs with an opportunity to join the discussion, but this week we were joined by Addicted To Quack, Conquest Chronicles, CougCenter, and Pitchfork Nation.

Hypothesis: UCLA will not make the Final Four again this year. They won't even make the Elite 8. Discuss.

Pitchfork Nation: It's been such a topsy turvy season of college hoops so fat that I'm not comfortable counting ANY of the nation's top teams out of making a deep tourney run. However, I am having serious doubts about the Bruins chances of making it through the 2nd weekend because of their streaky nature. While UCLA is certainly intimidating in their own way, I don't think they belong in the same breath with UNC, Duke, UConn, Pitt or Oklahoma. Despite that, if their shooters get hot come late March, they could become an intimidating factor.

Addicted To Quack: I'm in the same camp as Jkarp. UCLA hasn't had that "killer instinct" this year as they have had in years past. They've lost 3 out of their last 4 games and seem to be taking it easy as they ride into the Oregon schools to finish out the season. Will they step it up again once we hit the Pac-10 tournament? I'm not sure they will. The team feels different then the other top teams in the nation. I would be surprised to see UCLA in a deep tournament run.

Conquest Chronicles: Just like most thought in the preseason, I really think UCLA's front court will ultimately decide their fate. The only way they get to the final four is if Alfred Aboya plays at the level he played against Notre Dame and manages to stay out of foul trouble for 4 games in a row. Not impossible, just incredibly unlikely. You also have to wonder a bit about the Bruins next season. They once again lose three starters (and apparently there are also rumblings of Dragovic headed to play in Europe), and although they will have a lot of talent they will be very young. WIth UW currently in first after beating the universally beloved Trojans and ASU holding the tie breaker it seems very likely that someone other than UCLA will win the Pac 10 this year and next year. Strange to think about huh?

California Golden Blogs: UCLA has been a defense first team under Ben Howland. Not that their offense was bad or anything, far from it. But even if their offense was struggling, they always had a staunch defense to fall back on.

The game before, UCLA gave up 76 to UW. Then 84 and 74 to ASU and UA respectively. Over these past few games, UCLA's defensive intensity has faltered and they have given up many more points than usual.

If their defense stays like this, we might be seeing this sooner than later in the Tourney this year: 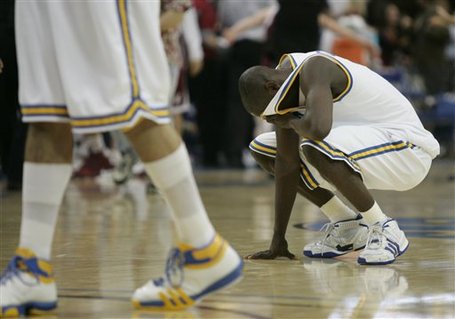 CougCenter: You are absolutely correct about the defense being the key for the Bruins. I wasn't a big believer in them early because of some disturbing defensive numbers, but during the four-game win streak that proceeded losing three of four, the Bruins' defensive efficiencies were all between 81 and 93. That is spectacular. Now? The defense hasn't just been suspect -- it's been flat awful.

If you're going to be a perimeter-oriented team, you better play great defense. The Bruins could still win a couple of games in the Tournament with hot shooting, but you're not going to go to the Final Four with that kind of D.

California Golden Blogs: I'm not sure that that Bruins team is not going to the Final 4 unless they put their Sweet 16 round in Pauley and have Steve Lavin, Jordan Farmar and Kevin Craft officiate. Which could very well happen.

The Bruins were able to get by with one of the most unwatchable teams in history last year, but they are much weaker than last year, they're getting bulldozed in a conference that is weaker than it was last year, and they don't have the consistency to win four in a row. They could get bounced at any time. Either that or East Coast bball is going to get a rude awakening.

Conquest Chronicles: Does anyone else remember the game in the tourney last year that UCLA played against Texas A&M? The refs literally would not let them lose that game. Check out this no call: 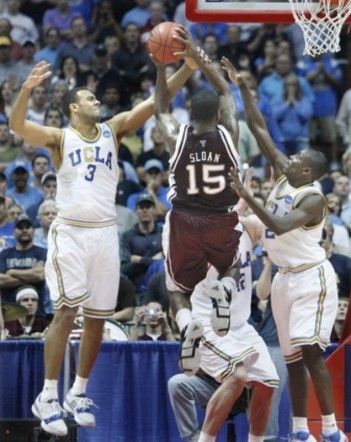 Conquest Chronicles: Trust me they all hate Lavin...he is the anti-wooden, I mean Anti-Christ

California Golden Blogs: I remember that game for exactly the same reason. My favorite part about that play was that BruinsNation posted a photo of the same play and used it as an example of GOOD defense by Josh Shipp (he's the one grabbing the shooter's wrist). You may fault BruinsNation for being so completely biased that they look beyond it, but it takes an unbelievable amount of arrogance to EMBRACE this play as a highlight. My hat is off to them.

This is actually a perfect example of UCLA basketball under Howland. Usually the Bruins just bump opponents with their bodies instead of grabbing them, but Howland's defensive philosophy remains the same: hammer the opposition at every moment and dare the refs to call it. The refs usually don't and the bruins usually win. Fortunately for everyone else, they're just not that good this year so they're losing games.