The Cal Bears Don't Depend On The Three-Point Shot

Share All sharing options for: The Cal Bears Don't Depend On The Three-Point Shot

Despite some recent, terrible performances, Cal still leads the nation in 3-point shooting, although their percentage is now down to just over 44%.  From that fact alone, you'd surmise that Cal is a great jump-shooting team, and given their lack of size inside, if you can just get out there and smother the Bears' shooters, you ought to win.  However, I've come to the conclusion that it's not as simple as that. 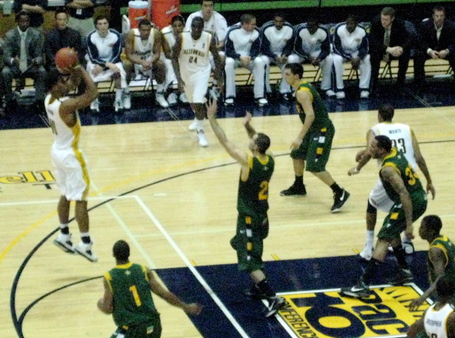 For example, take a look at Cal's games vs. Oregon.  Oregon is very young this year, and Cal was probably going to beat the Ducks no matter what defensive strategy Ernie Kent tried to implement, but more than any other team, the Ducks employed the "deny the long range shot" strategy.  How did it work?  Well, in the first game, Cal went just 3-8 from beyond the arc, with both makes and attempts being season-lows at that point.  Denied outside, however, the Bears went inside and found plenty of high-percentage shots, going 27-37 (73%!) from inside the arc.  Believe me, if you're shooting over 70% from 2, there's little point in even bothering to shoot the 3-ball.  In the rematch last week, Oregon again tried to deny the longball, and they again succeed, holding the Bears to just 3 of 7 treys.  Once again, however, the overall strategy failed miserably, as Harper Kamp burned the Ducks for a season-high 18 points in an 18-point beatdown.

OK, but Oregon simply isn't very good.  What happens when good teams deny our shooters?  If the Bears can't then make the adjustment and go inside, we get debacles like the USC game, where the Bears struggle with interior passing, get pushed outside the arc, and have to settle for the Braun offense (off-balance and ill-timed threes).

See, the Bears high 3-point percentage is not simply because the team is loaded with outside threats.  Yes, Cal has three very good guards (Randle, Christopher, and Robertson), but what they really excel is not just outside shooting, but in prudent shot selection (Theo in particular is exemplary, almost to a fault, in this category).  For even though the Bears lead the nation in three-point shooting percentage, they're in the bottom twenty in the country in three-point attempts as a percentage of their total field goal attempts -- less than 25% of their shots are from beyond the arc.  Basically, they will take -- and make -- open shots, but if it's not there, they're generally not going to force things.

This leads to the other interesting stat; again, despite shooting so well from beyond the arc, less than 25% of their points come via the three, putting them in the bottom quarter of the NCAA.  This, of course, begs the question:  if the Bears are so great, why don't they take more threes?  Well, besides the fact that Cal tends to shy away from marginal shots, the Law of Diminishing Marginal Returns will reduce the value of additional three-point shots

In fact, when the Bears play well, they generally don't take more than 12-13 long range attempts.  They tried a season-high 24 in a loss to Oregon State last month, and put up 20 attempts in last Saturday's loss at OSU.  Discounting the 3OT Washington game, those are the two highest totals of the year, both losses.  They tried 19 in a loss to Florida State, 16 in a loss at USC, and 15 in losses at UCLA and Stanford.  Only in their blowout loss at Missouri did they remain selective from three (6-13).  Despite the lack of a dominant post presence, the Bears' offense still revolves around getting inside and putting up high-percentage shots.

And beyond the big three starters, the Bears don't have much going on beyond the arc at all.  Once you get passed Robertson, Randle, and Christopher, the next-leading long range shooter for the Bears is D.J. Seeley, who's just 5-15 on the year.  Jorge Gutierrez is next, making just 4 of 18 shots, and nobody else has more than 6 attempts all year (though Eddie Miller is 4 of 5 shooting 3s in just 27 minutes).  Of course, this shouldn't be hugely surprising, given that Cal's starters play a lot of minutes (especially the three shooters, who all average more than 32 minutes per game), and when backups like Seeley and Gutierrez are in, they know they're not the first option on offense. 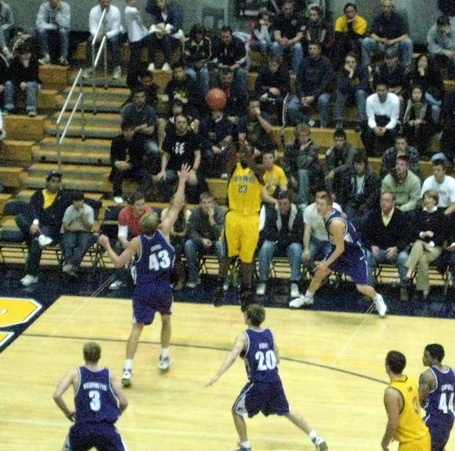 Patrick Christopher is a major reason why the Bears are so good from beyond the arc.

In essence, the Bears' success beyond the arc is due entirely to their three main shooters, and has just as much to do with those guys' prudent shot selection as with their ability to hit from long range.  Deny the shots from beyond the arc all you like, but as Oregon has demonstrated, that's simply not enough.

Oh, and you know what I really like?  All three of these guys are coming back next year.