But first, before we start the next Cal Football Moment of 2008, we have some unfortunate news.  Apparently, the great Blog War of 2009 has begun.  Avinash (aka BearsNecessity) has tried to gain some modicum of control over CGB and CGB North.  This attack came in the form of parasitically taking over host blogger, Yellow Fever.  As with most parasites, he has broken down Yellow Fever's defenses and, as of last news reports, currently controls Yellow Fever.  We fear he'll move to take over other hosts and have complete control of CGB and CGB North.  We'll continue the fight and keep you up to date as to how the power struggle goes.  And don't think this is a time for an uprising, CGB North, because we will crush it with an enthusiasm unknown to mankind.

Ragnarok surmises that this was because Yellow Fever visited www.FreeCreditReport.com.  Steer clear of there.  Don't say we didn't warn you. 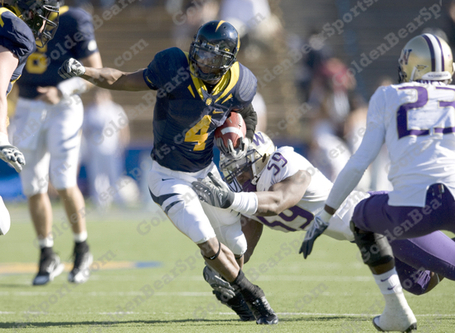 TwistNHook:  And now, we have, what?  The Best Bush Run?  What the hell is the Best Bush Run?  I was arguing against this one.  I wanted a Marshawn 4 yard run against the Browns here instead.  I mean yea, it was just 4 yards, but c'mon, it was Marshawn!  Best 4 yards evair!  I think Hydro was arguing for this one.  That Hydro, always hating Marshawn.  What's up with that?  So, Hydro, what run are you talking about here?  I hope you weren't talking about Reggie Bush's best run this year as a Saint.

I mean, that was VERY Reggie Bush-esque.  That run right there, albeit against lower competition, made it very obvious that Best is approaching Bush-like status in the run game, as well as establishing himself as a Heisman candidate next year.

Twist:  And I'm having trouble remembering a specific Reggie Bush like run against Washington.  He had like 13 Reggie bush like runs against Washington.  Which one, in specific, are you talking about?  That is kind of why I originally put "Best in general" because he doesn't really have one run that stands out a lot to me.  There are so many amazing 30+ yarders.  But I do think that the first one that comes to mind is the WSU one, because it was the first really crazy one.

Anyways, the background info is this:  USC vs. Fresno State.  Bush runs like 200 yards across the field in all directions to score a like 80 yard touchdown.  Best almost did the same thing and cut in the same direction as Bush did.  It was very Bush invoking. 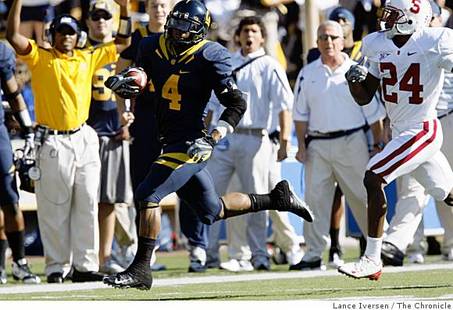 
Trust me, those fans who know their football will know which run of Bests was the Reggie Bush-like run.

CBKWit:  Actually, Hydro, I know Bush's run but I'm not sure which Best one you are talking about.  There's the one where he went down the west sideline and did the little high step thing ala Bush to cut back towards the center of the field and pick up an extra ten yards or so.  I think that's probably the one to which you are referring, but you could be talking about the one on the east sideline, when he cut towards the sideline and absolutely destroyed the defenders angle before cutting back to the middle of the field and taking it to the house for an 80 yard TD.  That one was probably less "Bush-esque" but was more impressive in my opinion - watching him destroy the defender's angle was unbelievable.

HydroTech:  You're thinking of the one I'm referring to.

That's the UW highlights for Best.  Is it the run referred to as "Best cuts back on a 53-yard run" at approximately the 30 second mark?

Yellow Fever:  Here's my take. '08 Husky defense bad. Worse than Iraqi information minister providing facts. Worse than Shaq guarding the pick and roll. Worse than Luxembourg's defense in the Ardennes offensive. Worse than thugs getting owned by a brother with no legs.

Watching Best plow through UW is like watching Usain Bolt get a two second head start in the 100 m dash. Exhilirating, yet totally unfair.

Ragnarok:  Watching Avinash blow us away with his talent for similes is like watching Shakespeare totally pwn a bunch of third-graders in a "What I Did This Past Summer" essay contest.

TwistNHook:  Firstly, don't praise the parasitic one who has taken complete control of the host.  Secondly, I thought those were metaphors?  Wouldn't a simile require the words "like" or "as"?

Ragnarok:  I suppose only the last one is strictly a simile.  I claim engineer's exemption!

TwistNHook:  I tried to claim that on my taxes this year.  Somehow I ended up owing Bobby Jindal 3.8 billion dollars.  Praise be to Bak Bak he rejected it! 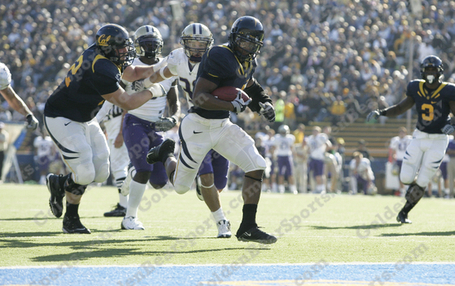 And since Avinash is essentially giving Best, the UW Exemption, I'm going to disagree.  I mean they are still a DI school.  Their players still have pride.  Sure, they aren't the best team out there.  But every other great Pac10 RB played them and none played as well as Best.  This sounds kind of like Rishi's argument as to why Quizz was better than Best "Take Best's best numbers out, because he played too well!"

Yellow Fever:  Washington had just lost the Apple Cup to the only team more miserable than them. Their earlier games still entertained the notion that they would actually win something, so they tried harder. Once that was gone, the air was out of the balloon. Their chances of winning were nil the moment Best scorched the end zone the first time.

All games are not created equal. That Husky team got worse as the season wore on. Jahvid Best got better as the season went along. The results were predictable. It's like when Kobe put up 81 against Toronto--awe inspiring and slightly horrifying.

Cal fan watches amazing run against mediocre team by Cal running back:  "Well, it was just against Washington."

HydroTech:  Did Avinash take over CBKWit, too? There's NO other explanation.  Literally, none.  I've thought for 4 hours on this and can't think of any reason at all.  Nada.  Nada mucho.

Ragnarok:  I agree.  Either CBKWit has gone completely and totally insane or Avinash's power grab continues! 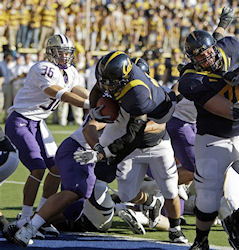 TwistNHook:  I'm not trying to say that that FSU team was the same as this UW team.  I just find it odd how people seem eager to denigrate Cal accomplishments.  Ok, I get it, UW isn't exactly a world beater.  But Best still had an amazing run.  AND STILL WAS ON PACE FOR LIKE 600 YARDS IN THE GAME!

Let's focus on the positive here, instead of looking for potential negatives.

Ragnarok:  And btw this is a moment that could have long lasting impact.  It was part of Best's assault at the end of the year.  He rushed for like 1,000 yards in the last 3 or 4 games alone!  That math isn't quite accurate, but he started to build momentum for next year.  Lord knows we've seen a lot of Cal players' Heisman campaigns derail, but maybe this Bush Best Run will have an impact more lasting than merely destroying UW in 2008.