Pac10 Roundtable: All Good Things Must Come To A Slight Change

Share All sharing options for: Pac10 Roundtable: All Good Things Must Come To A Slight Change

Like  most unsuccessful things, format change is inetivable.  For some, it means Latino Hip Hop.  For others right-wing talk.  For the Pac10 Roundtable, it means we are tinkering with the format.  Starting next week, it probably won't be in this Craig Kilborn-esque 5 Questions format.  That was started by Addicted To Quack, anyway.  Why we continued to follow their idea, we'll never know.  Now, that we've taken complete control of UC Eugene and sent their "freedom fighters" to our North Korea-esque labor camps, we're looking into making the Roundtable more CGB-friendly.

So, starting next week, we'll try doing it in a more Roundtable format between all the blogs with discussion of a hypothesis or current event.  Hypotheses like "USC is pure evil" or "The dispersion of salts produced by reciprocative motion of the salt-water front in a coastal aquifer induces a flow of salt water from the floor of the sea into the zone of diffusion and back to the sea."

I definitely want to know what Conquest Chronicles' views are on BOTH of those hypotheses.  But that's next week.  For now, let's read more about those 5 questions.

Besides remembering the bitterness of slavery through the bitter taste of parsley, I am sure Monty was hard at work instilling defensive intensity.  When you give up 50 points in the first half to the 9th place team in the Pac10, you know things are bad.  Sure, every now and then a lucky shot falls, but mostly it was giving up open looks.

Let's read what CBKWit said about the first half against Stanford on Saturday:

Stanford shot a preposterous 67.9% in the first half, including 75% (75%!!) on 12 three-point shots, and I'm not sure it wasn't higher - BearBallCarrier's sources said it was 74% (with 8-10 on threes) in the half.  I pegged it at about 70%, a terribly disheartening figure if you're on the other side.  To make matters worse, it wasn't that Stanford was hitting difficult, contested, or lucky shots - most of them were open jumpers that the Bears simply failed to close out.  70% is absolutely ridiculous in any situation, but 60% would have been understandable against the Bear's lackadaisical defense.  If you feel fortunate to be down only 14 points at half, as I did, your team played a pretty terrible half.

So, defensive intensity is definitely a focus for Monty and Cal.

Which basketball player from your team would you choose to be on your Party Yacht?  Why?

Max Zhang.  He could do the Soldier Boy Dance. 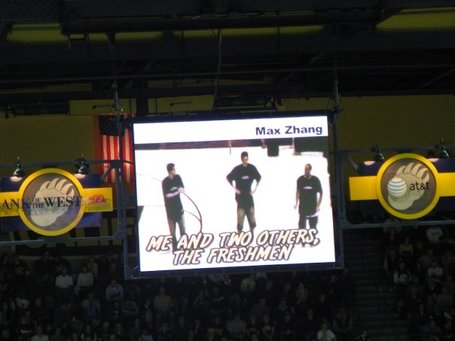 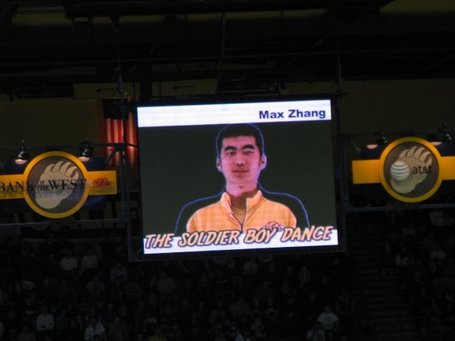 3. Lots of "minor violations" going on in College Football these days. The Pac-10 isn't immune to this issue as both Paul Wulff and Steve Sarkisian have gotten caught up in the madness. Is this just a case of stretching the rules? Is it believable for a head coach of a D1 program to be "in the dark" when it comes to the rules? More importantly than all that, do these recruiting violations even matter?

Running a football team is like running a political campaign.  You'd like to be on top of everything, but sometimes you can't keep track of the hundreds of different people who, in theory, you control.  I'm sure Coach Tedford tries to run the cleanest program out there.  But he can't keep 24/7 watch on every player, coach, booster, and other vaguely affiliated person who could, in theory get Cal in trouble.

Nonetheless, I think most of these recruiting violations are inane.  Wasn't one, because they gave him a UW jersey with his name on it?  I mean I get the point of that, you don't want to create a slippery slope on gift-giving, but still.  Its a jersey.  If a player goes to a school, because they received a jersey, I will personally pay for Cal jerseys to be sent to every Mormon Pacific Islander, including women, child, and the frail.  Just to be on the safe side there.  Now, we'll get all those great linebackers and linemen!

Wasn't another one because they simulated a game day entrance onto the field?  That's just foolish.

4 - If you look at the standings as we sit today...the potential first round matchups in the Pac-10 Tournament are: Washington vs. Oregon State/Stanford, ASU vs.WSU/Oregon, UCLA/Arizona and California/USC. Play out these games and tell us who wins the automatic bid.

Ragnarok: 8/9 - Oregon State v. Stanford.  You know what?  I really think OSU takes this one.  It's still a little weird to pick them to win games, and I don't necessarily think of Stanford as the 9th-best team in this conference, but there it is.  Given the Beavers' 15-point whipping of the Cardinal in Palo Alto last month, I gotta think OSU can get to the second round here.  Winner:  Oregon State.

5) If you had your choice, which group of aging rock stars would you want your marching band to back up on an awards show? Who would you pair your rivals' band with for maximum embarrassment?

Well, with Cal, the obvious choice is the Counting Crows, given the "superfan" status of lead singer Adam Duritz.  However, because I'm more of a fan (and I really liked how S&M turned out), I'm going to go with Bay Area legends Metallica.  Could "Enter Sandman" be even more awesome with a marching band accompaniment?
As for our rival's band, well, I can't think of any aging rock stars who would embarrass the Stanford Band any more than they already embarrass themselves.  Maybe Guns 'N Roses could be hilariously tragic, especially after Axl Rose goes all 'control freak' on them and fires the band in the middle of a performance, then walks off stage, disgusted.