Good triumphs over evil, at least in one sport

Share All sharing options for: Good triumphs over evil, at least in one sport

Halfway through Pac-10 play, our Golden Bears are a perfect 9-0.  Put another way, we know that every other team in the Pac has at least one conference loss, because all of them have lost to Cal.  This is the first time in school history that Cal has started 9-0 in conference play.

The ninth win did not come easily.  USC and Cal both came out shooting well, and USC lead 20-19 with 8 minutes gone in the first.  A 15-4 Cal run put the bears up 10, and Cal responded to a 7 point USC spurt with a run of its own to head into the locker room with an 11 point lead. 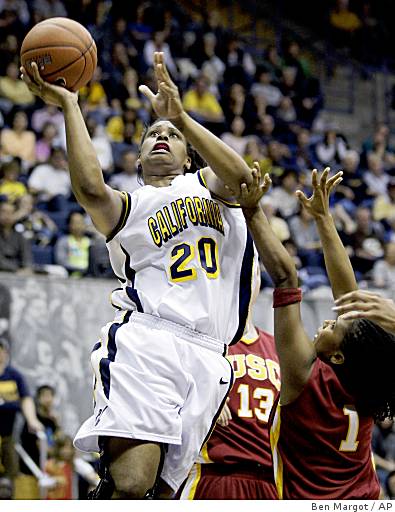 That was about as comfortable as it would get for the bears.  USC cut the lead down to 2 by the 11 minute mark and the score remained close for the remainder of the game.  Cal finally seemed to have control after a tough Alexis Gray-Lawson (remember her?) fadeaway made it a 5 point game with under 2 minutes to go, but USC answered immediately with a men's range 3 pointer.  Cal had at least 3 turnovers in the final 3 minutes, the last of which gave USC an easy lay-in and a tied game with 18 seconds left.  It was USC's first tie or lead since 20-20, less than halfway through the first stanza.

Cal fans know how this usually ends.  Building a nice lead and scraping to hold on, only to lose in the final seconds is a painfully familiar script.  Women's basketball is no exception to this Cal sports formula; one needs only to revisit last season's losses to Stanford at Haas and, especially, to George Washington in the NCAA tournament, to see the lady bears at their Cal best.  Saturday afternoon, though, they broke the mold. 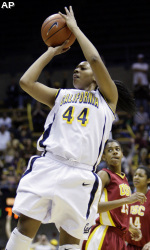 With less than 10 seconds left, Cal isolated senior forward Ashley Walker on the right elbow.  Walker drove to the hoop, drew a double team, and put up a shot.  It missed, but senior center Devanei Hampton set up camp on the weak side of the rim and, left alone by the double on Walker, nailed the put back with 2 seconds left.  Ironically, it was almost an exact replica of the final play which doomed the bears against GW last year, from the weakside put back off a miss to the time left on the clock and even the direction of the play (right to left).  Perhaps Cal teams of old would have failed on the final possession, but this squad showed the patience, steadiness, and poise that often accompany experience.  They may have been a bit rattled by the pressure in the last few minutes (the turnovers sure made it seem so), but they took care of business at the end and closed out the win.

If you haven't seen this team in action yet, you owe it to yourself to get out to a couple games.  I have finally gotten to the point where I have stopped comparing women's basketball to men's basketball and have instead started comparing women's basketball to itself.  It make take watching a couple of games to get used to it, but when you get past the fact that no one is going to jump out of the gym for a board or alley-oop, it's really entertaining.  This Cal team is especially fun to watch: you can see the wily senior Ashley Walker toy with less experienced players in the post, watch Alexis Gray-Lawson and her pretty shooting stroke, or observe our next star, freshman guard Casey Morris.  Casey has the best looking jumper on the team, save for Lexi, and a surprisingly good handle for a true freshman.  This is a good team, and their record is not a fluke.  Go check them out!  Also, go bears.