Share All sharing options for: The More Things Change...

the more they stay the same.  Ragnarok and I attended Friday night's Alumni Basketball Game at Haas, and the overwhelming theme was how little these "vintage" players (as Eddie Kleinhans, the Haas announcer, referred to them) had changed.  I'm not sure what I was expecting exactly, but perhaps I had envisioned a 255 lb Alex Pribble destroying Rod Benson in the paint, or maybe Omar Wilkes draining threes from 25 feet.  Well, that did not remotely happen, but I can't say I'm disappointed.  I guess I can take comfort in the fact that, while so much in the world has changed since he graduated, Ayinde Ubaka still dribbles around aimlessly for 10 seconds at the top of the key. 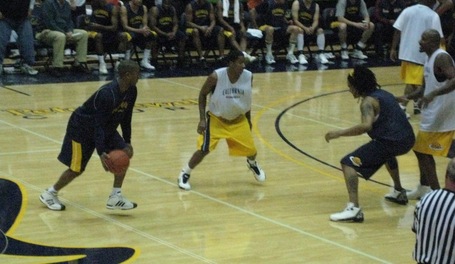 Unfortunately, Roy Fisher (he of the dreads - when interviewed, he called them a mid-life crisis) did not get the blue team memo on running the classic Braun offense.  Here he attempts to set a screen for a confused Ayinde Ubaka, who is in the midst of unnecessary dribbling and is undoubtedly preparing to pass the ball harmlessly around the perimeter.

In celebrity/charity exhibition games, there is always one guy who takes things way too seriously and exerts twice as much effort as everyone else.  Last Friday night, Roy Fisher was that guy.

Fisher was throwing his body around and, unlike everyone not named Lamond Murray (who was that guy for the Gold Team), actually making a concerted effort to win the game.  Here, not so much, but a nice shot all the same.

The Blue team was down one with only three seconds left in overtime (the only thing better than 40 minutes of Pribble is 42 minutes of Pribble) when Fisher head faked behind the 3 point line and drew a foul on an overzealous Murray.  After missing the first and making the second, the gold team called a timeout to ice him.  Would Fisher succumb to the pressure?? 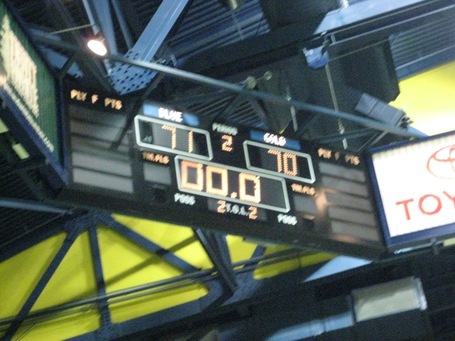 Fisher hits it!  And spares the vintage players from 2 more minutes of slow jogging.  Ironically, 71-70 was the final score of the 1959 NCAA final, with Darrell Imhoff and Pete Newell's Golden Bears beating Jerry West and West Virginia for the title.  Darrell Imhoff, Jerry West...Roy Fisher? 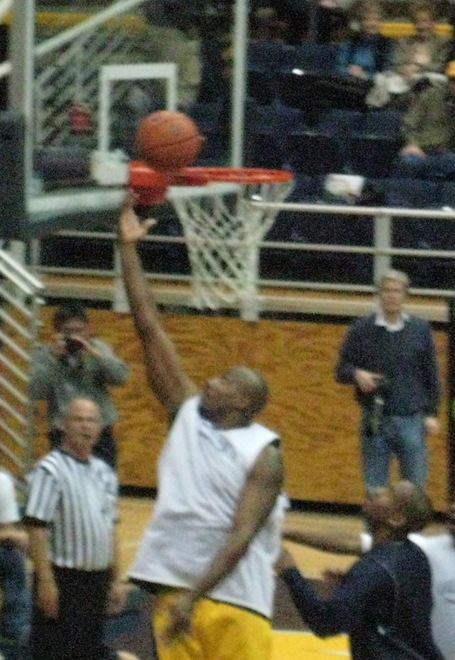 Lamond Murray still put on an impressive show, even in defeat.

Your leading scorer, however, was not Roy Fisher, but rather Mr. Boom Tho himself, Rod Benson.  Sure, most of his 18 points were on dunks, and yeah, he still has hands of stone when you try an entry pass into the low post, and yeah, he's still a goofball out on the court, and OK...wait, where was I going with this?  Oh yeah, same ol' Rod Benson. 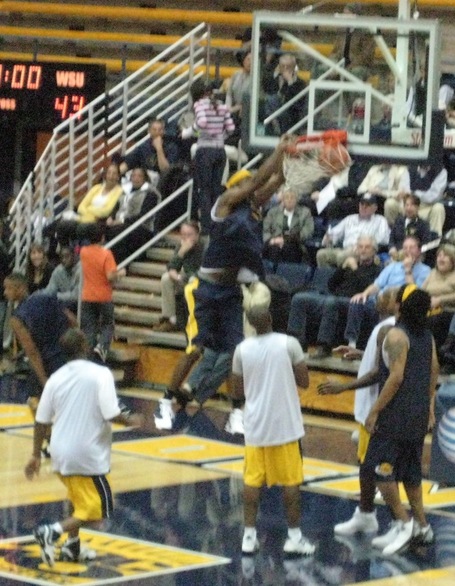 He sure is fun to watch, though.  And however much fun you're having, he's having more.  Why, just check out his dance moves during one of the timeouts:

Probably the star of the evening, however, the guy who made this event truly awesome, was the announcer, Eddie Kleinhans.  With a completely partial and informal crowd, Kleinhans was free to let loose, from referring to Rod Benson as "Boom Tho!" when he slammed home a dunk (Roxy Bernstein, the Cal radio broadcaster, very awkwardly exclaimed "Boom got THEM tho", after another Benson dunk), to chiding Conor Famulener for his lazy defense in not getting out on shooters.  (He did this as the game was going on!) 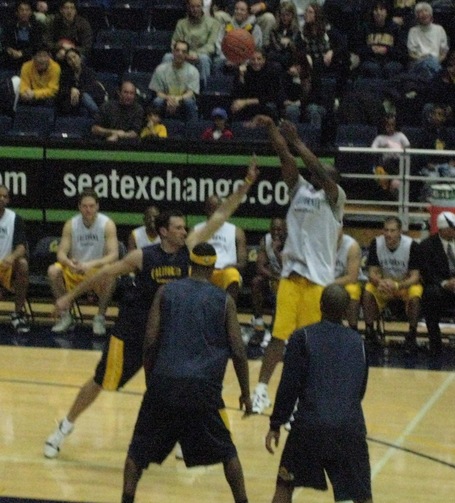 Get out on those open shooters, Conor!

Kleinhans finest moment, however, came at the expense of Christian Prelle and this embarrassing attempt at a dunk:

You can hear Kleinhans make fun of Prelle over the video, but his best line of the night came later in the game, when Prelle stole the ball himself and (foregoing the dunk) took it in for an easy layup, to which Eddie responded, "Somehow we all knew that was always just going to be a layup."  Again, the best part was that this retort was over the loudspeaker, and during the game.

There was also a fair amount of Pribble Time, for those who've missed Cal Basketball's very own Rudy.  (You'll notice he was the one with the nice steal to set up Prelle in the video above.  Personally, I think if Alex Pribble (now a high school basketball coach) were to grow a chinstrap, he'd be a more-than-passable double for Turtle on Entourage. 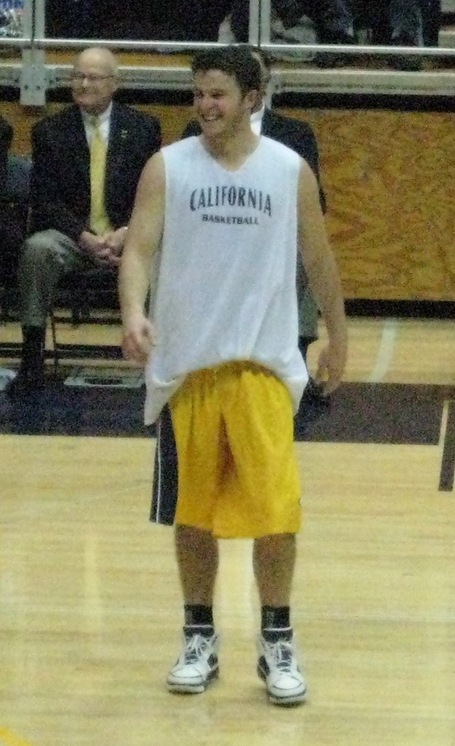 Of course, none of Cal's current NBA stars were playing in this game, but that's only understandable:  if you had millions of dollars invested in these guys, would you let them risk injury in a just-for-fun alumni game?  Still, Ryan Anderson was cool enough to drop by for the game and give a little interview during one of the "media" timeouts.  If you ignore the terrible video from my digital camera, you can clearly hear Ryan give standard, uninteresting  answers to Eddie's softball questions.

After the game was over, we were allowed down on the floor for photos, autographs, and meaningful conversations with our favorite players.  Kittwin, BearBallCarrier, and OskiWeeWee took approximately 400 pictures of Randy Duck, and I look forward to their FanPost on the subject.  I spoke briefly with Taylor Harrison, who informed me that there's a fair amount of cartilage damage in his knee ("more than there should be"), and that he's cleared to play so long as there isn't any pain.  Unfortunately for him and our frontcourt, he's still experiencing pain and isn't sure if he'll be able to play again.  I told him that I missed watching him get under opponents' skin, to the point that they threw punches or elbowed him.  He misses it too: "No one has punched me in a while," he said with a smile. 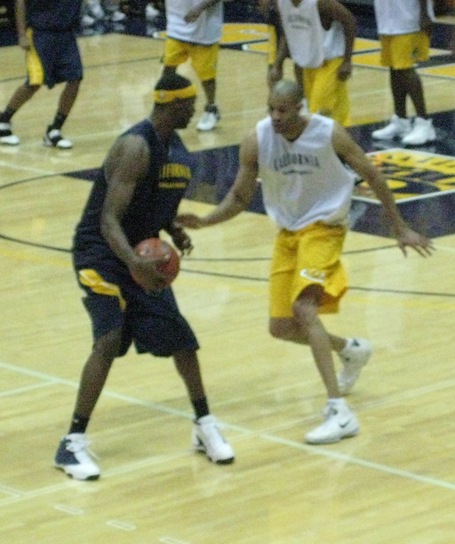 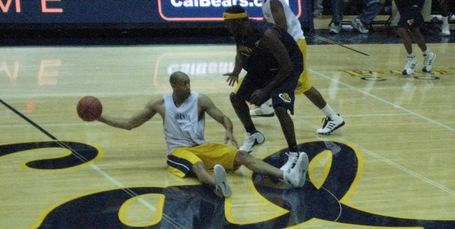 A couple more nice shots that I couldn't fit anywhere else in this post.

So what did we learn?

- Conor can't do much on the court, as evidenced by his early 15 foot brick and lack of defense on Lamond Murray.  The girls still think he's hot.

- Lamond Murray is a man among boys, when he wants to be.

- Randy Duck stands around after the game looking into the crowd for (according to zoonews) "poon".

We already knew all of this, so we learned nothing.  Aside from everyone being a little older and a little slower, they hadn't changed a bit.  And with all the uncertainty surrounding the economy, the war, and the offensive coordinator, I think that's just way I like it.

After the game, the players shake hands.  We're all winners here!  Except for the Gold Team, who are, in another, more important sense, losers.