Looking Back at USC vs. Cal: Predictable Playcalling?

Share All sharing options for: Looking Back at USC vs. Cal: Predictable Playcalling? 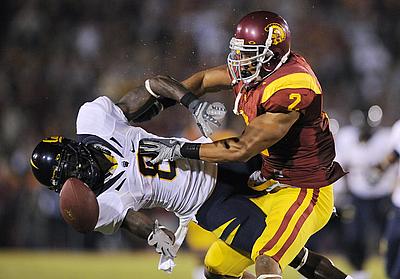 So way back in November when the game was actually played, I decided to look into whether the playcalling was predictable.  Of course culinary school finals got in the way of things and so only now have I finished looking into this question.

Well, before we answer this question, I guess we have to ask: What is predictable?

I'm assuming that those people were talking about knowing whether the play was going to be a run or pass.  On a deeper level, some people might have such insights as to actually know what type of pass or run is being called prior to the play happening.  Such intuition comes from studying the offense and knowing formational, personnel, down and distance, and motion tendencies.

For this analysis, I'm going to see if Cal has any tendencies when considering the following factors: personnel tendencies, shotgun/under-center tendencies, and down and distance.  I am not going to be looking at the entire formation (such as strength of formation, location of WRs, etc.).  While this certainly doesn't provide the clearest and most accurate picture of whether Cal has tendencies, I'm doing this for two reasons.  First, it gets pretty complicated when you have to aggregate plays by personnel, the full formation, and down and distance.  Second, I already know some of Cal's tendencies, confirmed them with this analysis, and decided a simpler analysis would still demonstrate the same results regardless of whether I accounted for the full formation of offensive plays.

So, was Cal's offense predictable when Cal played USC?

Watching the game for tendencies, one really stands out.  It's perhaps the most obvious tendency Cal has on offense.  It's VERY obvious.  You don't need to be an expert to see this tendency.  I'm sure you all know it so I'll just skip explaining the tendency and just tell you how bad the tendency is.

In a world where you want to keep the defense off balance and constantly guessing, the tendency was a whopping 94%!  I mean, you want to have the tendency down to around 50% give or take 10%.  But 94%?  That's a bit much.

Wait.  I suppose some people don't know what tendency I'm talking about despite how obvious it is.  Okay.

That 94% is how often Cal passes the ball when the QB is in shotgun.  In the 2008 Cal vs. USC game Cal passed the ball 31 times out of 33 plays from shotgun.  Caveat: I did count some dead ball plays or re-do plays and might have missed one or two plays here or there but the change in results wouldn't have changed the percentage result significantly.  Thus, Cal has a HUGE tendency on offense.  Cal passes the ball a whopping 94% of the time when the QB is in shotgun.

Now this revelation and discovery is nothing new.  Cal's former offensive coordinator, Mike Dunbar, had this huge tendency too.  This tendency occurred throughout the year and didn't change much.  This tendency was really obvious in 2006 when Cal played Tennessee.  I blogged about that game in this old post from the old California Golden Blogs Blogsome website.

Now just think that Cal was in shotgun approximately 33 times against USC and passed 31 times.  That is big time telegraphing/showing-your-hand that you're going to pass when the QB is in shotgun.

But wait.  There's a caveat.

It's not really a big deal that you're going to pass from shotgun if it's 3rd and 10 or in general 3rd and long.  In other words, who cares if your formation is suggesting pass when the down and distance is 3rd and 10?  The defense is already going to be expecting pass anyways.

So, with that out of the way, let's get to the chart below which shows all ambiguous down and distance plays during the 2008 USC vs. Cal game.  Give it a look.  Do you see any tendencies?

All Ambiguous Run/Pass Plays Based on Only Down&Distance:

**This play was Cal's 3rd play of the game and featured Jahvid Best in the wildcat formation.  The play was botched and resulted in a loss of yardage due to a high shotgun snap by center Alex Mack but the play looked to be a run play based on the blocking technique of the offensive line.

Do you see any tendencies in the chart above?

The first that pops out at me, which is not a tendency, is the lack of ambiguous passing plays on 2nd down and 3rd down.  Only 8 out of the 27 plays above were non 1st down ambiguous down&distance plays.  This is a product of the fact that the Cal offense had a hard time moving the ball against the SC defense to keep downs and distances manageable.  Thus meaning that for the most part the Cal offense encountered a lot of must-pass situations.

One tendency I see is that Cal appears to pass a lot when the QB is in shotgun despite ambiguous down and distances.

I've accumulated all the plays in the chart above where the QB was in shotgun and put them into a smaller chart (below) to better see the tendency.

Ambiguous Run/Pass Plays Based on Down&Distance and From Shotgun:

As you can see from the chart above, all these plays are ambiguous down and distances.  Furthermore, they all feature the QB in shotgun.  The result of all these plays?  Pass.  Pass.  Pass.  The only play that wasn't a pass play was the one run play, but even that play probably deserves an asterisk by it because that was the third play of the game which featured Jahvid Best in the wildcat formation and since Best isn't the QB, that play could probably be thrown out.

So what does this all mean?  On ambiguous down and distances when the QB is in shotgun, and despite the fact that the offense has the liberty to either run or pass, Cal is almost always going to pass the ball.

The key fact is that the QB is in shotgun.  As you can see in the first chart, when the QB is under center, the run/pass ratio is more balanced.  To show you what a better run/pass ratio looks like on ambiguous down and distances, I've accumulated Cal's plays from the game when the QB was under center with 12 personnel in the game (see chart below).

Ambiguous Run/Pass Plays Based on Down&Distance, 12 Personnel, and from Under:

As you can see, there is a much better balance with exactly 50% of the plays being run and pass.  This is the type of balance that an offense wants when operating within a specific personnel grouping and formation.  Having such a balance doesn't tip off the defense as to whether you are going to be running the ball or passing the ball.

Now, there is another bad tendency that Cal has on offense.  Cal had this tendency during the 2008 USC vs. Cal game as well as throughout the 2008 season.  What is that tendency?

When Cal uses 21 personnel with the QB from under center, Cal is almost always going to run the ball.

You can see this tendency in the chart below where I've accumulated all the plays during the USC game where Cal had 21 personnel on the field, with the QB under center, during ambiguous down and distance plays.

So that's 10/12 plays (83%) which are run plays when Cal has 21 personnel on the field, the QB under center, during ambiguous down and distance plays. This tendency is pretty high.  Ideally, I suppose somewhere between 40%-60% is better.

If I was on defense playing against Cal, 21 personnel was in the game, and the QB under center, you can be pretty darn sure Cal is going to run the ball.  There are a few caveats to this generalization that I won't get in to, but for the most part, this is another tendency that could use some fixing.

Was Cal predictable on offense during the 2008 Cal vs. USC game?  Yes, somewhat.

As I said before, predicting playcalling is fairly complex.  You have to account for a lot factors such as formation, personnel package, motion, down, distance, score, specific individual personnel substitutions, and game situation.  Reducing all those factors into a table is pretty hard and can leave merely a few plays on each chart which can make for too small sample size to draw any strong conclusions from.  So for the simplicity of answering whether Cal was being predictable on offense or not, if you only look at personnel package, QB location, down, and distance, then yes, Cal was predictable on offense.

But nobody was complaining about predictable playcalling in games which Cal won.  While I haven't looked at all the other games during the 2008 season, it is my hunch that Cal carried these tendencies in those games too (including the games that Cal won).  So the point here is that, Cal might have been predictable on offense against USC but they were also predictable against other teams and beat those other teams too.  So why are people complaining about playcalling in games when Cal loses?  Because when a team loses it's usually because something doesn't go as planned.  Offensively, it's because the team didn't score enough points.  If the team didn't score enough points, it must have been playcalling, right?  Perhaps.  Or turnovers.  Or penalties.  Or poor player performances.  Or mental errors.  Or bad calls by the ref (bad luck).  Playcalling is only one of many factors which can cause a team to lose.  While I think it's fair to see some predictable playcalling might have played a hand in Cal losing to USC, the blame shouldn't just be placed solely on the playcalling.

The irony of criticizing playcalling is that it's after the fact.  Any couch potato quarterback can easily say "dude, that playcall sucked," when a run play goes for no gain.  Or "why'd they pass the ball when they should be handing off the ball to our playmaker runningback!" after an incompletion or interception.  On the other side of the coin, as soon as a play goes for a touchdown the couch potato quarterback will exclaim "it's about time they threw the ball to the WRs who have been open all day!"

In short, plays which work are always great playcalls.  Plays which don't work are always poor playcalls.  Rarely do you hear anyone say, "that was a horrible playcall" in response to a play resulting in a touchdown.  Or "that was a great playcall" in response to a play which results in no gain. As backwards as these comments may seem, they contain more validity than one might think.  Why is that?  Because the focus on criticizing playcalling should be on the process instead of the result.

However, and unfortunately, that is not the way most fans would like to go about criticizing playcalling for whatever reason (perhaps because they don't know what else to suggest other than "anything except plays that don't work!").

So in the end, as much as it shouldn't, it comes down to this.  In the eyes of fans, if the play works, it's a good playcall.  If the play doesn't work, it's a bad playcall.  Thus, when the offense has been stymied and isn't getting good yardage on plays, as much as fans think they want better playcalling what they really want are just plays that work.

[In the voice of Mr. Joe Blow Couch Potato Quarterback with bong in hand]: "Yeah, call some plays that work, man."

What a novel idea.  If only every offensive coordinator in America could hear those words of wisdom.