What an unbelievable afternoon! The unexpected twists and turns. The thought that we were down and out, but then the BIG comeback! And finding love in a most unexpected place.

Oh wait, did you think I was talking about Cal's comeback victory over Stanford today in the men's game? No, no, no, I was talking about the world's worst movie ever, Shopaholic. But hey, at least it was better than the first half of the game. *sobs gently* 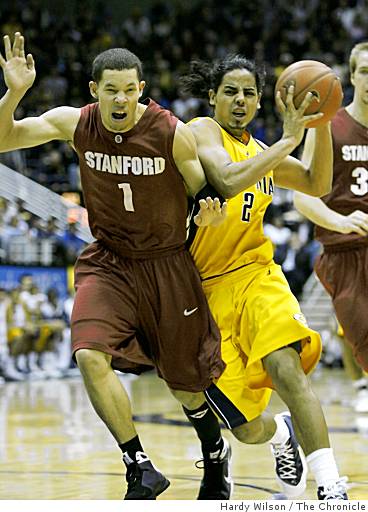 "Mitch Johnson wishes he had gone to see Shopaholic instead" via imgs.sfgate.com

Well, even after that great afternoon of Cal basketball slash horrific afternon of brutal romantic comedies, did you think you were done for the day? Did you think your iron-clad contractual responsibilities as a Cal fan were over and you could go out and enjoy Valentine's Day with your significant other?

Well, you better tell that significant other to put those tickets to Shopaholic away (seriously....), because we got MORE basketball! Or, in my case, basketball!

Here is the official story with information on the broadcast.

They list the TV as FSN, which doesn't technically exist anymore. A review of Comcast Sports Net Bay Area shows that it will be on that channel. Essentially, the same thing, but I wanted to just be clear. I am never all that good with all the linkage to stream, so if it is being streamed, check the comments for information. We'll try to add it here, also.

From the official story, we get more information on the force of nature that is Ashley Walker.

** Walker has scored in double digits in all but three games this season.

** Walker has hit 10 or more field goals in a game five times this season.

** Walker has shot 50.0 percent or better in all but four games this season. She has a career-best 57.7 field-goal percentage this season, third best in the Pac-10 and ranking her No. 13 in the country.

** Walker has 33 career games scoring 20 or more points. This season, she has topped 20 points 14 times and has done so seven times already in Pac-10 play.

** Walker was a nominee for WBCA Player of the Month in December, a month in which she averaged 22.6 points per game and shot 61.4 percent from the floor.

** Walker was a nominee for WBCA Player of the Month in January, a month in which she averaged 18.1 points per game with 7.4 rebounds per game.

** Walker's name was added for the ninth and tenth times in the Cal record book in cumulative career stat categories when she became No. 10 in career steals with 159 and No. 10 in games played.

COUNTDOWN TO 2,000 Ashley Walker needs 78 points to become the second player in the history of Cal and the 11th player in Pac-10 history to score 2,000 career points.

In the coming days, we'll have recaps of all of the weekend action, plus information from the recruiting event Thursday night. GO BEARS! BEAT THE CARDINAL!