Huge, HUGE day for Cal Basketball on both sides of the Bay/gender divide.  The men get first crack at it, trying to avenge their earlier-season loss to the Cardinal over at Maples when they tip off at Haas at 2pm today.  Your game information:

JustinTV streams the game.  As does ChannelSurfing.

Also, at halftime today, Cal will hold a ceremony in which they retire former Cal Bear great Darrall Imhoff's #40 jersey.  Some info on Imhoff, for those who don't know:

Imhoff, a 6-10 center from San Gabriel, Calif., was a part of three conference championship squads that advanced to the NCAA Tournament under head coach Pete Newell. The 1958 team reached the regional final, where it lost in overtime to Seattle, before reaching the Final Four the next two years.

During Cal's magical run in 1959, Imhoff averaged 11.5 ppg and paced the Bears with 11.0 rpg. He had 22 points and 16 rebounds in the national semifinal against Oscar Robertson's Cincinnati club, and he scored with winning bucket with just 17 seconds left in the championship game, lifting Cal to a 71-70 victory over West Virginia.

The next season, Imhoff took the Bears back to the Final Four, including a second straight semifinal win over Cincinnati when he poured in 25 points and snared 11 boards. However, Ohio State ended Cal's dreams of back-to-back crowns the following night.

Following his Cal career, Imhoff was chosen with the third overall pick of the 1960 NBA Draft by the New York Knicks. He spent 12 years in the league with All-Star appearances in 1966 and '67. 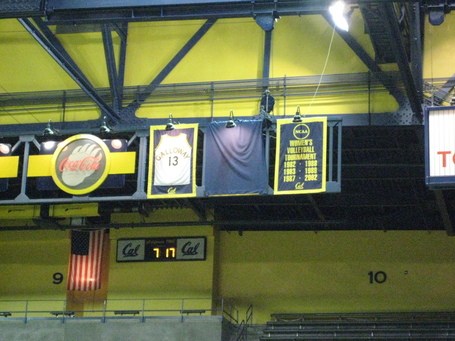 Darrall Imhoff's #40 will be retired to the Haas Pavilion rafters at approximately 3PM today.