TwistNHook:  Moment #8 was Vereen's long TD run against MSU.  Here is the entire drive where Cal scored.  1 play.  Just a handoff on the 19 and then BAM!  I remember thinking that it would just be insurance, but it ended up being the key difference in the game.

Now, notice the time there.  4:38.  I remember thinking before that drive started that Cal just needed to get a few first downs maybe drive down the field.  The game would be over.  Then, BAM!  We score.  Too soon?  I guess its never ever too soon to score, but MSU did end up scoring another TD.  And, of course, as Cal fans we were freaking out, thinking the game was lost, even though Cal was up by a TD with minimal time left.  So, maybe Vereen's quick burst off the right side for 81 yards was not the best possible outcome of that drive.

But man if it wasn't amazing!  Here is the video:

HydroTech:  That was a great run and some great blocking.  Twas a nice way to seal the W for the first game of the season.  The right side of the line did a great job of opening up just enough of a hole for Vereen to slip through.  And notice the fullback making the key block just at the right time to clear space for Vereen.

Ragnarok:  I think what really stood out for me about this run was that it was Shane Vereen's breakout at Cal.  Sure, we all knew about Jahvid Best and how stupid-fast he is, but for those of us who hadn't gotten a chance to see a lot of Spring or Fall practices, we had only really heard rumors and practice reports about how good the backups were.  Then, of course, Shane busts this amazing run on a really nothing-special running play, and my instant reactions was "oh my god -- both of our guys are ridiculously fast!" 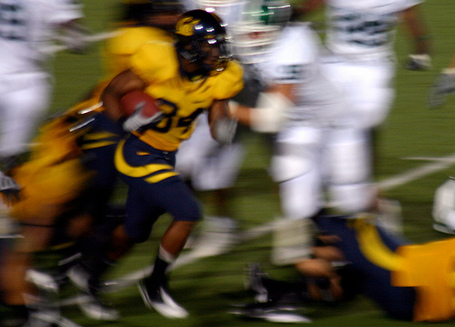 In fact, when the play started, I don't think I had been paying real close attention to the personnel on the field (the Bears were on the opposite side of the field from me anyway), so I'm pretty sure I thought it was still Jahvid Best out there.  Only when I figured out that it was actually Vereen did I get *really* excited.

TwistNHook:  I remember CBKWit turning to me and saying "We get those 2 for 3 more years!"

CBKWit:  I have no recollection of ever talking to TwistNHook ever.

HydroTech:  You must block it from your memory.  Lord knows I do.

YellowFever (Ok, really TwistNHook pretending to be Yellow Fever): I agree with the timing thing.  I was saying "Lets have a long sustained drive here."  Sure, scoring was great, esp. on an exciting run like that.  Can't argue with that.  But it might have been a bit of a double edged sword, leaving all that time left on the clock.

Maybe, Vereen should have just run around in circles on the field for a few minutes before scoring.  Larry Fitzgerald definitely should have done that during the Superbowl, that's for sure!  Luckily for Cal, Vereen's explosive run didn't harm Cal.

TwistNHook (Or is it really HydroTech masquerading as TwistNHook???): I hate myself.

TwistNHook (The Real One):  Well, that's true, but I don't see its relevancy here.

Ragnarok:  Sometimes I feel like I'm going to someday be reliving these email conversations on some sort of "Behind the Music"-style documentary.  Like, "Tensions had been building for years, but I never thought HydroTech would actually *do* something about it.  He was all talk and "Fuck You, TwistNHook" and such.  He'd quit the blog, then come roaring back a few days later with a great post, a bunch of photoshopped screen captures, and some fresh pork loin jokes.  Everything would be fine.  Then one day he snapped and punched TwistNHook in the throat, right there in the parking lot in front of everyone.  I was stunned!" 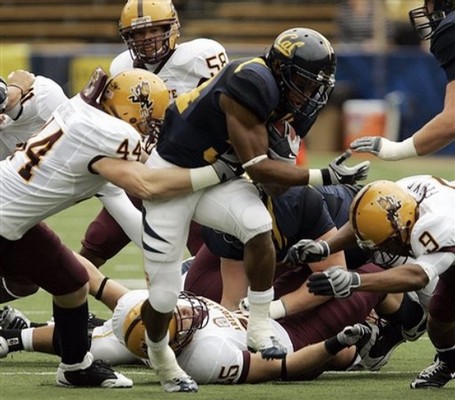 HydroTech:  I think CBKWit, Ragnarok, and YellowFever must officially think I am one crazy person.  Your perceptions are right.  I'm crazy.  Typically, though, I am not like that.  I'm generally a reasonable guy.  However, TwistNHook brings out the worst in me.  We don't get along.  He snapped me long ago.

CBKWit:  HydroTech, I hate TwistNHook too.  So do all of my friends.  It's ok, you are not alone!

HydroTech: I would just like to reiterate how great the run blocking was on this play.  Vereen barely got touched going through the hole.

TwistNHook: I hate my life.

HydroTech:  Not to discredit Vereen, but I feel like this play should be renamed from "Vereen's Long TD Run" to "OL's Great Run Blocking for Vereen Which Results in a Touchdown."

I mean, did you see the blocking?  The hole was big enough to drive Kim Kardashian through it (TwistNHook would have fit too).

TwistNHook:  Who would want to discredit Vereen?  Who are these people?  Anyway, so that's what we think about this particular run.  What are your guys thoughts?