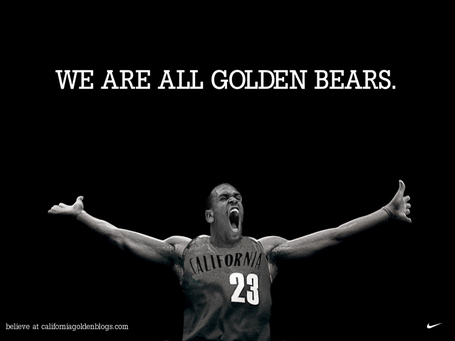 Saturday found a scene familiar to long suffering Blues - Cal basketball providing a glimmer of hope as Cal football fizzles out.  I went to both the men's and women's basketball games on Saturday, two blowout victories surrounding our predictably unpredictable no show at UW.  RemorsefulBruinBabe called it a "losing sandwich on winning bread."

The women's freshmen and the men's backups performing so well would be the lead story here, but RemorsefulBruinBabe just found this, via BearBallCarrier.  You may not like basketball, or a capella, but the combination is scintillating.  That furd Tiger Woods makes you question humanity, and then Max Zhang and Maestro Randle save the day.  Max swaying in the background puts it over the top.

The women were up first on Saturday.  They won, big.  BearBallCarrier, Calnet, and I sat in the chair-backs three rows behind the Cal bench.  I even caught a shirt, from a real, live cheerleader.  You could, too!  There were plenty of great seats available, for only 12 bucks.

The freshman came in with a lot of hype, and so far it is deserved.  They're the difference makers on the team, not our three senior guards.  Eliza Pierre dominated the game with her speed and defense.  The box score says she only had three steals, but she created plenty more of Cal's twelve steals and Colorado State's 17 turnovers.

Pierre isn't a smooth offensive player yet, but she's improved even since the Baylor game 2 weeks ago.  She hit a nifty pull up jumper from 15 feet and looked much more in control handling the ball.

Eliza reminds me of Jorge, in the way she uses her tenacious defense to control the game.  Like Monty said of Jorge, it's an absolute pleasure to watch Eliza play defense.  But as much as I love Jorge, Pierre may be better, relative to her sport.  She's faster and more athletic, and I think she'll turn into a natural point guard with more ease than Jorge.  It's really worth the price of admission to watch her, and as a freshman with only 7 career games under her belt, she's going to get much, much better.

Yes, this tiny picture is all I could find.

The freshman posts have also impressed so far.  I haven't seen Brenna Heater yet, as she's been out with a boot on her foot.  I heard she's due to return fairly soon, which should be a huge boost to the team.  Right now, Cal has 3 healthy forwards, all of them freshman.  Senior Rama N'Diaye, our one experienced post, hasn't played this year and seems likely to redshirt.  It's been pretty impressive to watch 3 freshman combine for 80 minutes a game at the two forward spots.  Stallworth is ridiculously smooth for a freshman with a very consistent shot.  Caldwell has what we call a "rebounder's body" (read: big posterior) and moves well for her size.  Brandon is probably the fastest and most athletic of the bunch.  They are all more effective and more polished than I anticipated, but the biggest (and most necessary) surprise has been their conditioning.  Cal was pushing the pace against Colorado State and our big were keeping up, despite only having one sub.

The big void on this team is shooting.  Alexis Gray-Lawson has a nice looking stroke but only hits 25-33% of her outside shots on a given night.  Layshia Clarendon is more of a scorer than an outside shooter; this will serve Cal well in the long run, as she looks to take over AGL's points next year, but for this season does not fill a glaring need.  Senior Lauren Greif is still struggling from outside, going 0-2 on good looks in the CSU game.  Stallworth is probably the best three point shooter on the team right now, as she knocked down two threes from the top of the key.  The entire team needs work on free throws - they shot less than 50% in both games this weekend, and it particularly hurt them in the loss to Texas A&M.  Stallworth hit the three pointers against CSU but missed both her free throws; Caldwell has an awkward over the head motion on her free throw shooting, barely grazing the rim on her first shot and then air-balling the second.  Shooting looks like it will be the achillies heel of this team all year. 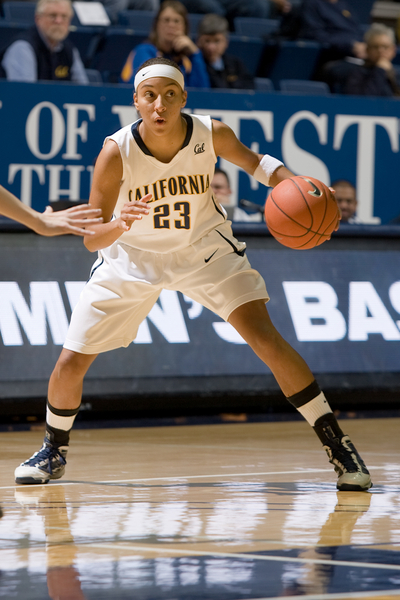 I watched 2/3 of the men's game against New Mexico at the Pit last Wednesday.  Cal was pretty close to winning, which is pretty impressive considering Harper Kamp and Theo Robertson missed the game due to injury, Markhuri Sanders-Frison, Omondi Amoke, Jorge Gutierrez, and Patrick Christopher had the flu, and the game was played a mile above sea level.  If we have Theo, we win.  If Amoke, who has been a terror on the glass lately, doesn't foul out with zero points in nine minutes due to the flu, we win.  Hopefully New Mexico keeps winning (they're 8-0) and hopefully the selection committee gives us a pass for all the injuries/vomiting and dehydration.

Cal was up 6, I believe, when New Mexico started employing this trapping press to slow the bears down.  It worked.  Cal lost its rhythm and turned it over at least once that I can remember, a Boykin travel.

Once Cal got into the half court, New Mexico continued to employ some sort of perimeter oriented zone, though I can't remember if it was a 1-2-2 or an extended 2-3.  Earlier in the half, Randle buried three pointers on three consecutive possessions as he ran around screens off the ball, plays we generally ran for Christopher against man defense last year.  Once New Mexico went to the zone to stop chasing Randle around the court and giving up open looks, the Bears struggled.  It's somewhat strange that New Mexico didn't go to a zone earlier, given how badly we struggled with it against Syracuse and Ohio State.

On the first possession against the zone, Randle penetrated and kicked to an open Jorge, who missed it from the top of the key.  Theo, come back soon.  Cal's offense never settled down, New Mexico hit some tough shots, the Lobo crowd got into it, ball game.

With Wednesday's loss to New Mexico, Saturday's game against Iowa State gained a lot of importance.  Wins over Jacksonville, Murray State, Princeton, etc. are nice, but losing every game to a name opponent (which is what they had done so far) is not going to get Cal a lot of cred.  And after the football debacle in Seattle (I guess Cal can't score on usc OR former usc assistants), Cal fans needed an upper.  We got one.

The first half gave us three of the biggest highlights of the season thus far.  Max put his hand in front of Craig Brackins' (future NBA first rounder) face, prompting Brackins to slap it away, irritated.  Max was under his skin, and shortly thereafter Brackins whined to the refs about it.

Number two: Max blocked Brackins' shot.  Brackins finished the game with 21 points, but most came before Max showed him who was boss.  Brackins wasn't a big factor after that. 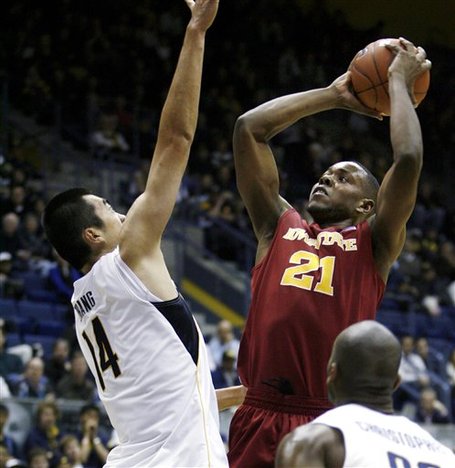 Number three:  Jorge dunked.  He threw it down with one hand on a fast break, giving Cal a nine point lead.  I didn't know he could dunk!  I don't think any Cal fans did.  Did he grow an inch or two since last year?  Did he improve his vertical leap?  All I know is that I love Jorge more than I did before, and I didn't know that was possible. 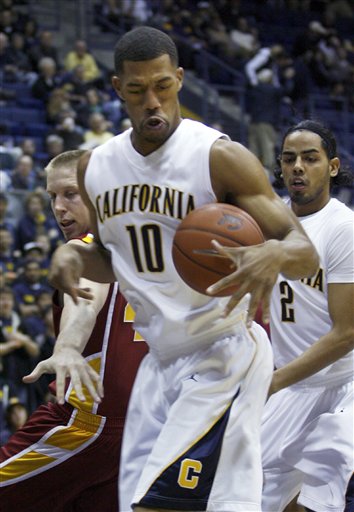 The background of this picture, the forefront of my heart

Patrick Christopher had 4 points at half.  In the first minute of the second half, Randle hit him for an alley-oop.  He scored another 14, including a couple threes, in the half to finish the game with 20.  It was yet another example of Christopher needing a confidence booster of some sort to insert himself in the game.  Hopefully he will be more consistent once our calm, steady senior Theo returns and takes some of the pressure off PChris.

Randle had a terrible shooting night, 7-21 overall and 0-7 from three, but still finished with 18 points.  Aside from his awful shooting (especially bad considering he is a really, really good shooter), he was great.  He controlled the game from the point, dishing out 9 assists against only 2 turnovers.  He held his man, ISU's three point specialist (insert Euro name here) scoreless.  Randle has really picked up his defense and he doesn't even need his number one asset, his incredible outside shooting, in order to be a very good player in a game.

Cal may be turning a corner.  It would have been great to win one or two of the big games we've lost, and with Theo and without the flu, we probably would have.  But the flip side to the injuries and illness has been experience to our backups.  Max and Omondi Amoke have been coming on very strong lately, and without the increased playing time they've received due to our temporarily depleted roster, they wouldn't have shown this much improvement.  Max played the best game of his career on Saturday, against a first round NBA pick no less.  He still has plenty to improve on (rebounding, some semblance of a post move), but he's serviceable and that's a lot more than you could say 6 weeks ago, much less last year. 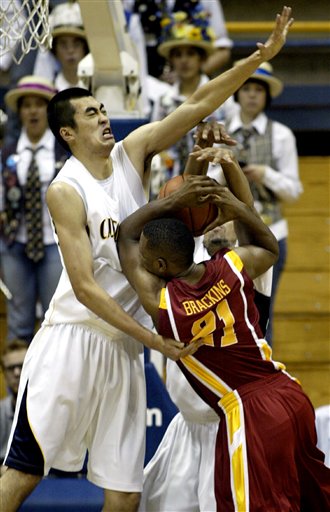 Amoke is a menace on the boards, especially at the offensive end.  He's also grown more patient and relaxed offensively, leading to greatly increased offensive production.  He's been forced to play a lot of minutes at the 4 because of Harper's injury, and with Harper likely out for the year, that will continue.  But even though he's undersized playing at power forward (6'7 and pretty skinny), he's been able to collect double digit rebounds in limited minutes.  He compensates for his lack of size with superior athleticism and persistence.

The really sweet part is that Theo is returning!  He's supposedly playing tonight against the Pacific Tigers.  He'll help this team in so many ways: breaking zones with his shooting, improving the perimeter defense, allowing Jorge to come off the bench and get back to his ultra-aggressive defense, allow Amoke to play the three on occassion...the list goes on.  And he's returning to a team that has improved since he last played, nearly a month ago.  Cal basketball is about to get really exciting, and just in time for the Poinsettia bowl.  Praise be Bak Bak.

On a completely unrelated note, this is what I sat behind at The Nutcracker last night: 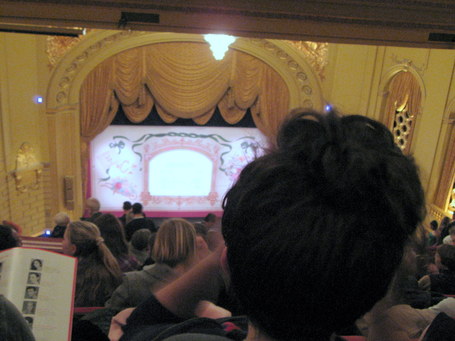 If you're going to a movie/ballet/concert, maybe the best hairdo isn't all of your hair piled on top of your head.  There may actually be someone sitting behind you!  And if this is your dad, unlike last week, I am not at all sorry.