Share All sharing options for: Q+A with Rock Chalk Talk

Hey Bear fans, don't forget, this isn't just a week with a big *football* game.  Now, there's also a hyuuuuuuuuuuge basketball game, too.  The Cal men's basketball team takes on Kansas.  Former National Champion Kansas.  One of the most respected and successful basketball programs of all times.  We faced them before, just a few years back in December of 2005.  Leon Powe had a double double and Omar Wilkes had 13 points, but, unfortunately, it was not enough as Cal lost 69-56.

C.J. Giles had six points during the spree, which turned California's 34-31 halftime lead into a 53-38 advantage for Kansas (4-4), which looked terrible while missing nine of its first 10 shots.

Giles, a 6-foot-11 sophomore, also spent much of the game guarding Leon Powe, Cal's 6-8 sophomore who had been averaging 25 points and nine rebounds. Powe, sidelined by injury all last year and the first four games of this season, had eight points in the first half and 16 points and 11 rebounds for the game.

Omar Wilkes, who spent one year at Kansas before transferring back to his native California, got a nice hand from the Kemper Arena crowd during pre-game introductions and finished with 13 points.

Cal hopes to get a different result this time out.  To learn more about the Jayhawks, who apparently love Rock and Chalk and, to a greater extent, Talk, we've contacted Rock Chalk Talk, SBN's Kansas blog.  They agreed to do a Q+A and it is presented after the jump.  The game is on ESPN on Tuesday, December 22 at 6 PM PST.  GO BEARS!

1. How much of a home-court is Allen Fieldhouse, really?  What can our players expect next week when they enter "the Phog"?

The home court advantage at Allen Fieldhouse is every bit of it's reputaton.  Personally I think there are two phases of that.  The first is the pregame.  Kansas truly embraces and highlights the history of the game and the great players that have gone through the program.  Players know that, and many times get caught up in it.  This tends to give the Jayhawks a big advantage from the outset because they are a bit immune to the pregame festivities.  A pregame atmosphere which I would put up there with the best anywhere I've ever been.

The second part is the actual noise and what the fans bring to the table during the game.  First off the Fieldhouse holds 16,300.  That's a fairly large building for a college basketball environment and it's full every single night.  Bring 12 fat men dressed as Santa Claus on Christmas Day to play the Jayhawks and that place is going to be pretty full.  Secondly, When it's a big opponent or a close game Kansas fans are on the ball, understand their value and provide exactly what the team needs.  Much like in a football game, basketball fans can provide the right boost and a little extra juice to the home team on a run.  They can also bury a team on the ropes.

Am I biased? Absolutely, but I don't think the numbers lie, it's tough to win in "the phog" 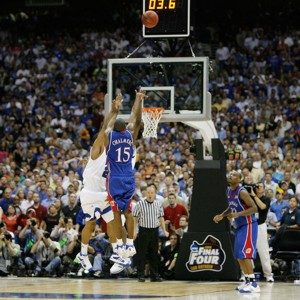 I'll say neither and I think Kansas would be hard pressed to double Cal to be honest.  We still haven't been tested much and when we have been it's been a bit of a challenge in finding our identity. Kansas is a team still working on chemistry, it's rotation and who exactly they are.  Cal looks to have some experienced guards and you guys beat an Iowa State team fairly easily.  The Cyclones aren't Kansas, but they were expected to be pretty good and Craig Brackens is a beast.  I'll say in the end Kansas wins by somewhere between 10-20.  No reason for the prediction just a gut call.


3.  What is it like to win a national championship?

It's pretty surreal.  Winning a National Title in basketball takes a lot of luck.  At Kansas we know all too well that the best team doesn't always win.  Being on the winning side of a National title is really a feeling of an entire season and entire careers culminating in the perfect storm.  Truthfully when it happened in 2008 I just felt an immense pride and more than anything the team deserved it.  That team brought the university together and Kansas basketball from it's fans to it's players share a bond because of the titles it's won.

4.  Is Kansas as good as their ranking? What are the odds you guys run the table?

They're pretty good.  If Bill Self get's this team playing his type of defense and they can find themselves offensively they'll be tough.  They have a solid 13 or so players that could see serious minutes at almost any school in the country.  Run the table...I'll say no way.  I think KenPom puts the percentage at 2.8% that we will but I just don't see it happening.  Any team, any night...that's what makes basketball so great.

5.  I don't know much about Kansas's rivals or players you hate on but of them, who do you want to punch in the face the most?

For me it's Missouri, hate them more than our other rival which is Kansas State.  The Missouri/Kansas rivalry dates back to some pretty nasty spats during the civil war in fact and there is no love lost between the two schools.  As far as a current player on Missouri that I'd punch in the face, I don't think I have one to be honest.  They are actually a little likeable lately. 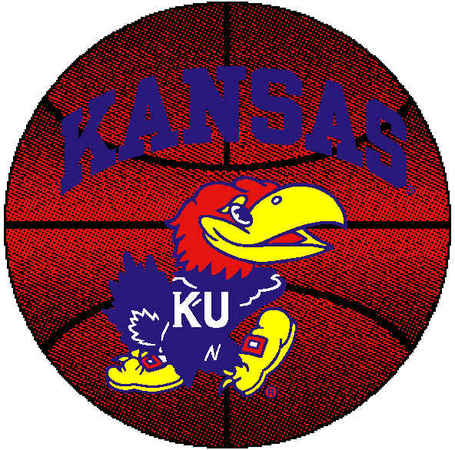 6.  Cole Aldrich, Sherron Collins, Xavier Henry will probably all be in the NBA next year. What's impressed you the most about each player, and who's the most impressive of the three as a college player (ignore the pro prospects)? Any weaknesses in their game that Cal could exploit?

Cole is a true big man which you don't see very often anymore.  Most impressive by far is his defensive game, he just controls the middle and is a big reason Kansas opponents shoot so poorly.  Weakness, right now is his offense.  Cal should drop the double team, he can be slow to react to that at times.

Sherron is plain and simple a winner.  Not sure what his NBA career will be but most impressive this year has been his efficiency.  With the improvement around him this year, he's been able to be much more selective in terms of his shot and it's made him deadly.  Weakness for Sherron, if he feels he has to take over...he can get a little wild.  If Cal keeps it close Sherron will try to carry the team at some point and at times that can be bad.

Xavier Henry's most impressive trait is his ability to score.  He scores in so many ways, is strong with the ball and is as good a shooter as a true freshman as I've seen at Kansas in a while.  Weakness...hmmm...not sure if there's much to exploit here, he's tough and appears to be a pretty complete player.

7.  Cal’s weakness is definitely it’s inside game.  How does Kansas’ inside game look?

That's not good news for Cal.  Cole Aldrich, Marcus Morris and Markieff Morris are all very solid inside.  Rebounding is a strength, Cole's defense is great and the Morris brothers have come into their own offensively.  Past those guys there's a true freshman in Thomas Robinson who looks to have a bright future as well.  Biggest challenge has been looking inside offensively.  Still, if Cal struggles on the interior Kansas will hurt them down low.

How you think this one goes?