Share All sharing options for: Ranking the 2009 Pac-10 Football MVPs: Part I

In case you missed it, here's Part 1: the LVPs of their respective teams.

This post got too long, so I had to split it into three. Here are the honorable mention categories and the Pac-10 players and units ranked #30 thru #21 (#20-11 coming this afternoon, #10-1 coming Friday morning). Let's dive into it.

Donald Butler: Didn't really do anything spectacular this year, but 96 tackles will get you on this list.

Daniel Te'o-Nesheim: So will 9.5 sacks and 12.5 TFL. Too bad the Huskies defense ranged from 'sheer brilliance' to 'human atrocity'
Ed Dickson: I'll be nice as possible about this--FUCK ED DICKSON. AGGGGGHHHHHHHHH.

Damola Adeniji:  Despite all the production of James Rodgers, he wasn't Canfield's main target on 3rd down. Probably because secondaries keyed in on Rodgers, Adeniji racked up 27 catches in that situation, 21 for first downs, 5th in the country. Only 49 catches overall, but considering he only had 1 last season, I'll say this is a slight upgrade.
Chris Polk: Finished this season on a tear: Five ninety+ yard games and a 1000 yard season overall. Hard to measure his impact though, since the Huskies lost three of those games and Locker and the defense were the focal points of the other two.

Trojan offensive line: Lost season for these guys. 17 sacks allowed, 40 tackles for loss allowed, only a top 40 rushing offense. Ho-hum for them. I would've dreamed of something like this for the Bears.
Mike Mohamed: Cal's most productive defensive player on a not-so-great defensive unit. You have to give massive props for a 100 tackle season (his 104 tackles were tops in the Pac-10). And he saved another Cal season from sliding into disaster with a crucial interception in the Big Game.


Kyle Williams, Dmitri Nance: Solid production considering their quarterback struggled to complete half of his passes. Plus I feel bad for Williams ending his career like that.

Syd'Quan Thompson: If Cal had ONE guy (Hagan, Hill, Nnabuife, Conte, Rope Guy, someone) step up at corner on the other side of the field, who knows how our season turns out. We sure as hell don't get lit up by Oregon, USC or UDub on defense (Syd's limited ability in the final game pretty much assured we were screwed against Locker).

He was still a fabulous open field tackler when he got the chance, and when quarterbacks threw to his side of the field, he usually shut down. Like Asomugha in Oakland, that kind of effort only gets rewarded with first team All Pac-10, and minimal impact on the box score. So while his talent is easy enough to gauge, it's really hard to measure his value. Which is why he's honorable mention and not on the top 30.

After the jump, here's #30-21. If there are any thoughts of players or units left off, or guesses as to who will end up in the top 20, leave them in the comments. 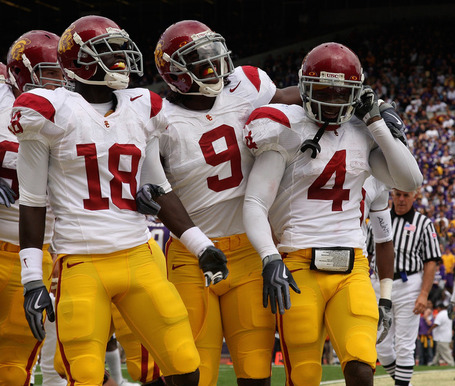 These two are actually the first since Bush and White to break 100+ all-purpose yards a game since Bush and Leinart. Solid seasons, but other than McKnight on the final drive against Ohio State and Williams tearing up Notre Dame, how many moments do you remember concerning these two?  That kind of year for the Trojans. It's up in the air whether either will return too.
#28 Ryan Whalen 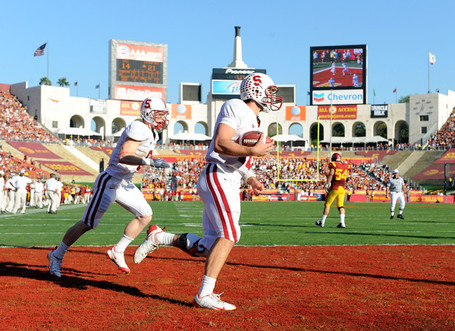 6th in the Pac-10 in receptions, turned into Luck's best passing threat when Owusu went Section Eight in the biggest games. Thought about ranking him higher, but I don't have any Whalen moments to really justify putting him further up. Perhaps the Cardinal fans can refresh my memory...oh, wait, there are no Cardinal fans. #28 it is.
#27 Arizona's receiving corps (Turner, Criner, Roberts, Dean, Douglas) 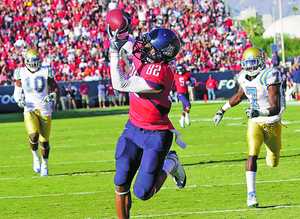 Five guys with 30 catches or more? Now that's spreading the wealth around. By contrast, Cal had only one receiver (Jones) catch more than 30. Obviously, Cal isn't built to be a passing offense, but still, this is a far cry from two-three years ago. Sigh.
#26 UCLA's secondary 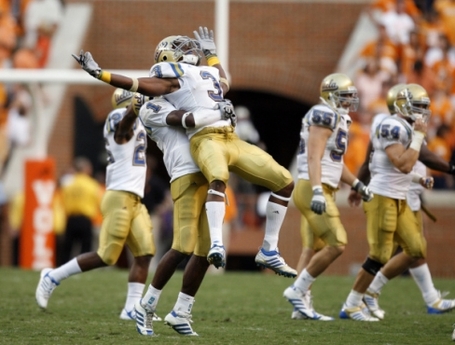 I know Rahim Moore led the nation in picks, and Alterraun Verner had another fine year--but how good are these guys? Other than shutting down Jonathan Crompton and whoever the hell Kansas State's quarterback is, the Bruins pass D has been surprisingly average. Even Kevin Riley burned them deep. I repeat, KEVIN RILEY BURNED THEM DEEP. Does this happen to good secondaries?
Oh well...at least Moore is capable of that "deep, longing, alluring, penetrating, soul-piercing, heart-tugging look".
#25 Tyson Alualu 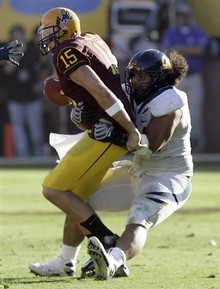 Kind of hard to say how bad the Bears defense would've been without Alualu cracking apart the line. His efforts alone helped shut down Minnesota's passing game in a tight 4th quarter. Extra linemen often were forced to commit to him, and it opened up the rest of the front to get after Arizona and the Furd's high powered offensive attack.

Unfortunately, he never really had a Mebane-like force on the line--he couldn't really disrupt the passing attacks the way his predecessors did  How much of that was dictated by scheme or by his own pass rush methods is beyond my knowledge, but Cal's pass rush was far weaker than anticipated, far weaker than the 27 sacks they put up this year.
Still a great season for Tice though--Cal's run defense was top-tier, and a lot of that had to do with #44.

(Story that really depressed me this week: Bear Insider's look at how close Ndamukong Suh came to being a Golden Bear. Imagine Alualu and Suh coming together in the 3-4 the last two seasons, particularly last year. I'm getting bummed out now.)
#24 Jahvid Best 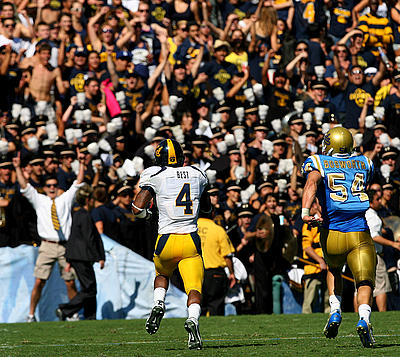 For a guy who was supposed to be a Heisman hopeful, it's shocking to see Best not even crack the top 20. But that's how it is in a frustrating season for Jahvid, whose season seemed to peak in Minneapolis. Still had some spectacular runs, but running behind the crappiest offensive line in the Tedford era, it could've been way, way better.
#23 Chris Owusu 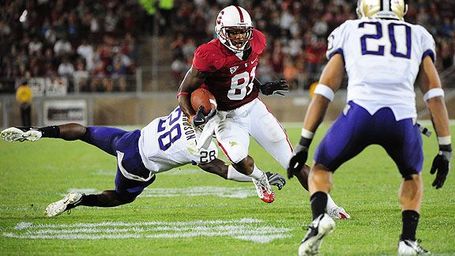 A menace for us, and a big game-changer for the Furd, having huge returns on almost every opponent this year. Surprisingly (and stupidly), everyone in the Pac-10 continued to kick to Owusu long after he demonstrated he would outrace their coverage to the end zone. The Furd ranked 3rd in the country in kickoff returns, mostly due to Owusu's skills.

He gets bumped down a bit because if he could just hang onto a few passes (he dropped big catches in EVERY conference loss), the Furd are going to Pasadena. 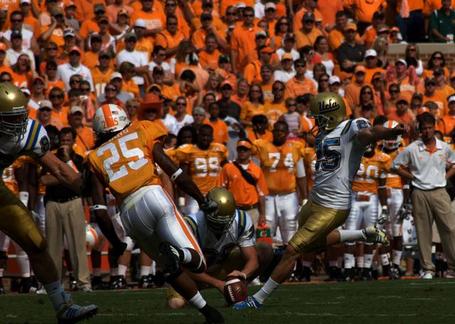 Not hard to say Forbath was UCLA's offensive MVP this season, isn't it? Switch Forbath with an average kicker and the Bruins win four games? Three?
#21 Shane Vereen 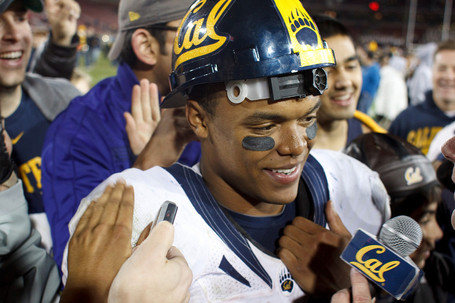 Surprisingly had more impressive performances than Best this season, cementing away a Cal victory in Pasadena and being the workload in two upsets over the Wildcats and the Cardinal. Best racked up big numbers against two of the worst teams in the country and an FCS opponent, managing only one great game this season against a bowl-eligible team. Although Best ended up with more rushing yards, Vereen had more all-purpose yards thanks to his kickoff returns and his own pass-catching abilities.  Most importantly, when the offensive line collapsed, Vereen had more of the elusiveness to slip away from encroaching defenders.
Best might be the better talent, but Vereen was the more valuable Bear for this Cal squad...but only by a little.