Share All sharing options for: Who Were the Worst Performers in the Pac-10 in 2009?

It's always hard to measure the value of good teams in football. It almost always starts with a good quarterback, followed closely behind by an offensive line and a running back. Then you want a strong front seven, with receivers and secondary coming somewhere after that. You can build a good team around the front four, a great one with everything else coming together

So in determining a football MVP (or I guess for college football, Heisman), we're looking at people from the first three or four categories strongly. In the next two days we'll start counting down the best players and o-line/defensive units in the conference to try and figure out who deserves to be the Pac-10's most valuable player

That's right, instead of doing a national college football consensus (which would be tedious and terrifying), let's go with what we know well. This is all Pac-10.

Because most of us are sick inside, we'll start with the worst Pac-10 performers. What player or unit (offensive line, particular aspect of defense, coach, other thing, etc.) do you feel played the worst this season? Did I leave anyone off that requires mention? Discuss in the comments!

Wait a second. Didn't Barkley just beat Ohio State in the Horseshoe? Nothing can stop him now! He's on his way to college football greatness!

Anyway, it seems like Carroll's petty anger at Mark Sanchez was a bad sign of things to come. I'm not saying that Sanchez could've saved USC from the avalanche at Autzen, but he should've outdueled Luck and Foles with essentially the same offense from last year. It would've been a B- version of the 2005 team, all offense and average defense. And they'd probably have ended up in Tempe.


If Sanchez was like an ice cream sundae at Fenton's (a little bad here and there, but still a tasty ride the whole way), Barkley was like a strawberry cream pie shake at Sonic's (tantalizing at first taste, but man would it make you sick down the road). He threw the most interceptions in the Pac-10, more than Sullivan, Prince, and any of the Wazzu troupe. His four turnovers in the Cardinal romp led to 28 Furd points, and he threw another killer pick against Arizona that led to what turned out to be a crucial seven points for the Wildcats. His 4th quarter stats were abominable--50% completion rate, one touchdown, SEVEN interceptions, 83 passer rating, which is good for 117th in the country, only about a drop of about a hundred in the rankings from the season before. His most memorable touchdown throw of the year was only meaningful in the sense that UCLA's defense will be headhunting him in eleven months.

Add in these continuing rumors from Thoroughbred that many of his teammates despise him, and all is not well at Heritage Hall for the first time in...well, a decade. The rest of the Pac-10 couldn't be more delighted.

Note: Thought about the Trojan run defense here, but come on, those guys got DECIMATED (entire front seven gone, plus another four or five guys injured). They had no chance against the Quack Attack or the power run game of the Furd. 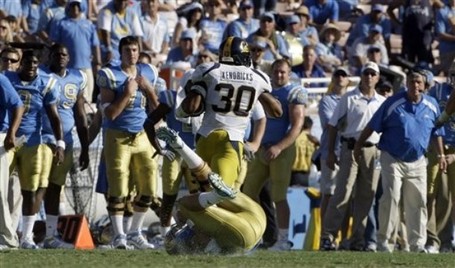 
Man, it was brutal watching these guys this year.
Some more fun stats: 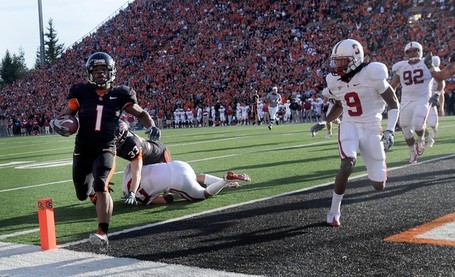 
Exactly the same thing we did for UCLA. Let's just rattle off the numbers...

A few examples of their defensive fails:
Perfect example of their horrid season came against Notre Dame. Toby Gerhart rushed in the go-ahead touchdown with a minute left in a tied game against an awful Irish defense, and Harbaugh looks about as pleased as Michael Corleone finding out Kay had an abortion. Why? The Cardinal could have kneeled down three times and kicked a chip shot extra point-type field goal at the buzzer to win. The touchdown put the Cardinal defense back on the field against Jimmy Clausen. Sure enough, after getting pinned at their own ten, in TWENTY SECONDS the Irish are at the Cardinal 24 and nearly pull a win out of their asses. All thanks to the Cardinal's hideous defense.

Yeesh. Maybe Gerhart did deserve the Heisman. But we'll get to the MVP candidates soon enough. 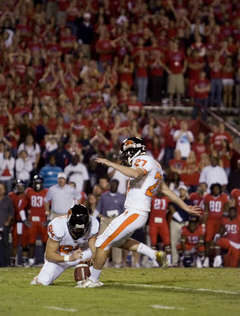 This isn't really a unit fail as opposed to a team fail; the Beavers suck in September EVERY SINGLE YEAR. They could never get going against Cincinnati even though they were at home. They allowed Nick Foles in his starting debut in Corvallis to complete 74% of his passes at 7.5 YPA with 3 touchdowns and no picks. And they needed a last second Kahut field goal to beat a 5-7 UNLV squad. And these guys plan to play TCU in Dallas and Boise in the Smurf Turf next September? 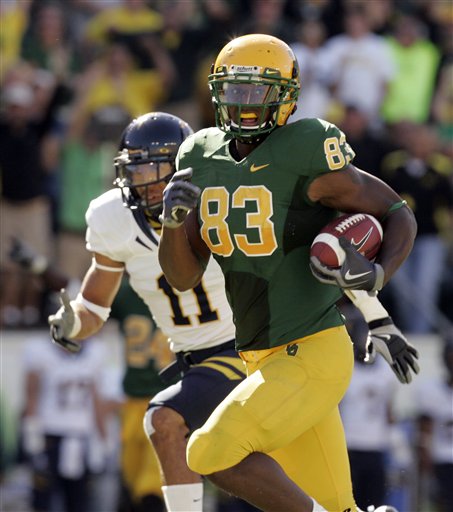 108th in passing yards given up; 103rd in completion percentage; 81st in passer rating. The Bears dropped from 3rd in the country in INTs to 71st, from 1st in the country in passes defended to 47th. So let's say they regressed a little.


(You might say the offensive line deserves this...but Cal still ranked top 40 in rushing yards per game and top 25 in yards per attempt. You might even say the special teams, but they didn't have as much impact as our defense, plus their general incompetence over the past half-decade deserves its own post. A lot of that had to do with Best and Vereen, but that's still only a mediocre unit, not an awful one. Nothing hurt the Bears more in 2009 than their pass defense...the offensive line just exacerbated the situation.)
Washington--Nick Holt
This one's hard to say. Holt's defense was much improved from last year, especially in the run game. USC, Cal, Wazzu, Arizona all fell. On the other hand...his defense still got ripped apart by the Oregon schools and the Furd. They weren't that bad, but they weren't that good either, so it's hard to call them the worst. So I'll go with the easy to hate Holt here.


Ultimately though, Holt's defense still provided us with the most comical college football moment of 2009, which could've been the difference between Locker and his first bowl game...

Arizona State
Only four games into the season, Pitchfork Nation wrote an open letter to his beleaguered starting QB withdrawing his support.

I retract anything positive I said about Danny Sullivan. Not only are you not physically talented enough to start for a Pac-10 team, but as you proved last night, you’re what we call in my family a "mental midget."

Instead, you exhibited the same physical problems we saw in each of the Sun Devils first three games. You sailed balls, you completely missed wide open receivers and left your pass catchers out to dry with several horribly thrown balls. Your most accurate pass was one you threw away in the 3rd quarter that perfectly nailed the "C" on the Muscle Milk sign on the side of the east bleachers.

Well, that sucks.
The numbers don't get much better for Sullivan: He never threw better than 56% in any quarter, he threw well on 1st down but didn't make much of a dent otherwise, and he generally struggled with everything. He hit 60% completions in only three of his games, all against bad pass Ds (Cal, Furd, Oregon State). For God's sake, he struggled against Wazzu. Shouldn't there be a shaming list for athletes who struggle against Wazzu?

And it wasn't like he was throwing to turds out there; both Kyle Williams and Chris McGaha notched 57 catches, and Dmitri Nance was a capable runner. No, it looks like most of the wounds were self-inflicted. 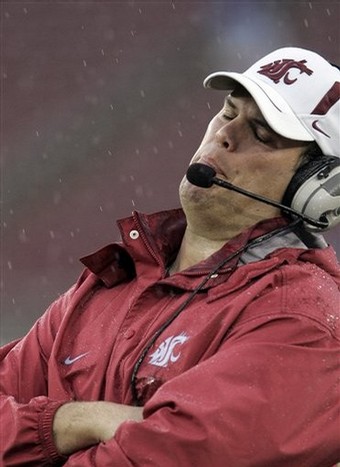 I'll save those poor Cougar fans an explanation; I really don't want to go over this hundred car pile-up, and they've suffered enough. At least they have Klay Thompson. 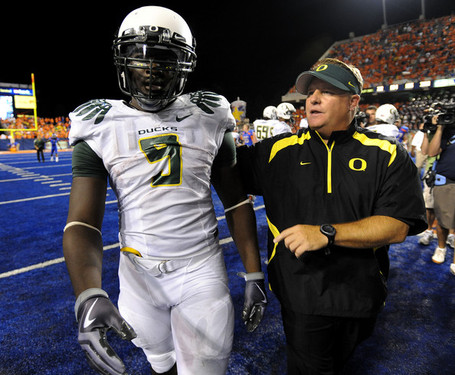 He's probably the Ducks Least Valuable Player. I'm not happy stating it since the dude got a huge punishment for a totally surreal moment, but he redeemed himself, so that's always good.

But I put a question mark there...because for not-so-obvious reasons, you could make the case that he's the unintentional Pac-10 MVP. Why?

1) The Punch changed the whole Oregon running dynamic. For nearly a month Oregon struggled to get past the rust, but slowly things started to click and their offense got back in sync for the Utah game; once James and Masoli started operating in tandem the Quack Attack began rolling.

So...does Oregon win close games versus Purdue and Utah if Blount is in the backfield? Do the Ducks slow the pace down against Cal, USC, UCLA, Arizona State, Arizona and Oregon State instead of attacking, attacking, attacking? Does James get going at all? Does Barner break out as a pure speed demon? Would Oregon have gone 10-2 without the Punch? I doubt it. In a strange way, Blount's actions made his team BETTER in the long run--the Ducks were able to play that fast up-tempo offense that Kelly relished, and they blew through the Pac-10 relatively unscathed.

(I will always believe that if the Bears had played Blount and Masoli that we could've snuck that game out--not necessarily won, but the opportunity would've been there. We could've bottled up Blount the way we held Gerhart in check, play deliberate 3-4 football and wait for Blount to find the hole before matching him at the line of scrimmage. Of course, we still wouldn't have been able to defend Ed Dickson, but at least it's a step up from defending no one.)

2) The media hatefest gave the Ducks an 'us against the world' mentality.  You can't underestimate the power of ESPN and the Internet on these guys--when Oregon became the dominant storyline of the opening college football weekend, when they heard about how they stunk and that their coach should be fired...it's not implausible they didn't rally around the hate and use it to fuel their overall mission. It's hard for me to say that Chip Kelly didn't use that to motivate the Ducks to play better, execute better, keep the pace going; they only let down once (the Cardinal), rolled everyone else and delivered in what amounted to Rose Bowl quarter and semifinals against Arizona and Oregon State.

If it had just been an awful loss the Ducks would've been forgotten by the national media--the Punch gave it the attention, gave Oregon the fire they needed to run through the rest of the season. It was the perfect black swan event. Everything went wrong on the first day of the season, and the Ducks spent the next three months trying to prove that it was an aberration. Didn't do too shabby, did they?

Of course, you could say he would've been theoretically least valuable; were the Ducks a better team if Blount wasn't playing? We'll never totally know, but the fact they barely missed a beat without him says a lot. They probably beat the Furd with him, but do they blow out USC, Cal, Arizona State, Washington and UCLA? I'm not so sure about that.