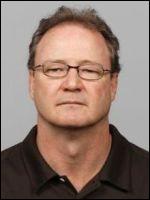 Hi, I'm Steve Marshall. You might remember me as the guy who coached the O-line that got David Carr sacked 76 times or the dude that coached an O-line on a Browns team that had the fifth to last  rushing offense in the NFL last year. You might also remember me as the guy who's spent no more than one to two years at any one destination. You'd think that'd be a telling sign that teams might be happy to get rid of me.

I currently am the Cal offensive line coach. Instead of utilizing simple blocking concepts a former successful Cal offensive line coach used for seven years that worked to perfection, I'm going to give a bunch of 19-23 year old o-linemen a thousand different pro style concepts that they need to cram in their heads in a month of fall practice and a few hours each week. That way when they face good defenses they'll stumble, make mental and physical errors, turn one of the most potent college running offenses of the past decade into crap, and help reacquaint Cal fans with a Holmoe-level experience I feel they've lacked. Keeps them from feeling optimistic about anything.

Case in point, today's game. I'm going to show how I can make the worst Pac-10 pass rush in the conference look like the Chicago 46. As follows:

Gets pressured on the first snap, dumps it off to Best on a broken play. This is not going to be a one-time thing.

Gets hit for no gain.

Gets hit for 1 yard gain.

Gets schooled off the edge, lets his QB get sacked rolling left.

Gets pounded on a 3rd and 1 for no gain.

Runs up middle for 1 yard. Ponders if this is what the rest of his Cal career will be like.

After much trial and tribulation, picks up first down.

After much trial and tribulation, picks up first down.

Lets man blow by him to set record for fastest time to hit QB after snap.

Screws it, puts on the hero cape, scores a touchdown, scares the shit out of everyone.

"No no, guys, this isn't part of the plan. Get back out there and do your absolute worst. Zone block pull someone left and man block fly sweep ruh-duh-duh-duh!"

(on the phone with Ludwig) "Please, give me a play that doesn't end in me eating turf. Get me anyone who knows how to block. Bloc Party. Lego block fort. Max Zhang. HELP ME!"

After Cattouse interception, nearly gets stuffed for safety.

Capitulates, calls quarterback sneak on our own goal-line.

Two yard gain. Realizes that he might have to suffer through another year of this. Sobs quietly.

Throws ball out of bounds as a lateral. Less painful than another sack.

Pocket collapses again and again, starting to feel like the captain of the U-Boat in Das Boot.

Out of desperation, starts throwing screen passes, dumpoffs, anything quick for fear that a linebacker might commit a level-one homicide on Riley. Beavers sniff every play out.

Frantically looks up Coach M on his speed-dial.

Glumly wonders how Cal students will blame it all on him.

That's me baby. Steve Marshall. I will make your offense blow.