This week, Cal takes on the Beavers of Oregon State.  There are 2 SBN sites from Oregon, Addicted To Quack and Building The Dam.  Many people say AtQ is the better site, but many people are wrong.  While AtQ gets all the hype and is so flashy (giving all of their Masolithusiasts Playstation 3s!), BtD is the much more consistent site.  Year in and year out they continue to produce stable, quality work.  It is not as well known work, but every now and then they really show up Conquest Chronicles and everybody starts paying attention to them again.

We thought for the OSU game, we'd do a Q+A with them.  Get their thoughts on this game, Building The Dam-style.  After the jump, see what their thoughts are on the game and whether or not Chip Kelly's face should remain un-punched.  And here are their answers to our questions!  GO BEARS!

Ah the great debate. Best is a more electrifying player, there is no doubt about it. But Quizz is hands down a better runner between the tackles, which is our offense. Throw in that he has a little bit more speed this year and he has broken out a few big runs, and I'll take Quizz. But don't get me wrong, I'm not comfortable playing against Jahvid Best.


2.  What is the #1 strength of Canfield we gotta watch out for?
When he gets time he can wing the ball in there. He throws a nice, tight spiral. And lately he's added a very accurate deep ball that's burned quite a few corner backs. But they key to Canfield is he needs time. He can't do anything under pressure.

3.  How angry does Oregon's win over USC make you guys?
I think we should all be happy that USC's reign as champion is over. But why couldn't it Stanford? Or you? Or UCLA? Or even UW?? What is most frustrating is not being able to turn on the TV or radio, pick up the newspaper, or leave anywhere outside of Corvallis without hearing about the awesomeness of UO.

4.  Who should we watch out for on the Defense?

The thing about our defense this year is that nobody has stood out. There is no Victor Butler this year. Even Paea and Kristick (arguably our two best returners) have had modest years. But watch out for our linebacking core as a whole. They have started to step up the last 4 games and are helping ease pressure off the line and defensive backs. 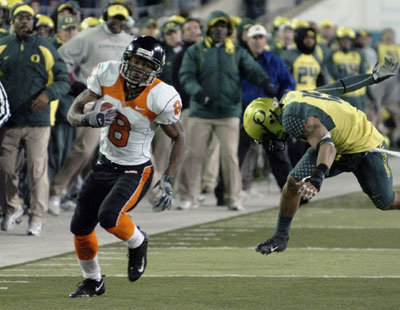 The entire Oregon football program. Chip Kelly told the NCAA and Pac10 that the Blount situation would be taken care of in house. He held a press conference stating that he would be suspended "indefinitely" but that only because they didn't want to kick him off the team and take away his scholarship. I thought that was the classiest move I've seen from a head coach. Then, as soon as the heat died down, they decide they will try and reinstate him. Oregon fans love Chip Kelly's attitude. I think he is the next Urban Meyer.


6.  How've the Rodgers brothers been utilized this year that's different from last?

The WildBeav (I prefer WildQuizz) offense has been fun to watch. And Quizz threw a TD against UCLA! Other than that, its pretty much Q-ball all over again (Quizz and Quon ball),


7. Are the Beavers dead meat if one of them goes down?

Not if we play Pitt, of course. There's more depth in the receiving corps than at running back. Freshman WR Markus Wheaton is being groomed to run the fly sweep, but he's not James Rodgers yet. So if the Beavers had to take one guy, they'd take Quizz, but James is one helluva player and it's hard to even say that.

Personally, and I know I'm going to catch shit about this, but LaMichael James from Oregon deserves more than either. In 8 games he has put up 918 yards and 11 TDs on only 131 carries. He's averaging better YPG than Best and better YPC than Quizz. But look at what Quizz does. He gets his yardage every time. Jahvid Best's biggest problem is Tedford doesn't get him the ball enough. And I don't buy the whole "worse offensive line" argument. Let's check out the star ratings of each kids and compare. And don't tell me that you have a new OLine coach either. I refuse to believe that these kids forgot everything Michalczik taught them.

9.  Cal's pass defense so far this year has been...suspect.  Can Oregon State take advantage?  Will they?
Absolutely we can. I believe we have one of the deepest receiving cores in the conference. Again, the key is pressure of Canfield. If we can get the running game going early, it could be a long game for the Golden Bears.