Roll On: I Have No Idea How Cal's Defense Will Stop Oregon State's Offense

Share All sharing options for: Roll On: I Have No Idea How Cal's Defense Will Stop Oregon State's Offense

Watch this. Then cry.

Trojan Football Analysis's of Sean Canfield's game against USC is as follows.

That is most of the damage by Oregon State in the passing game. Just 12 of Canfield’s 43 passes resulted in 231 yards of gain or 70% of his total throwing yardage. One was a lucky pass and several plays exhibited uncharacteristic poor reads and tackles by USC.

Poor reads and poor tackles. Finding the soft spots in the zone. Throws down the middle against the linebackers. Does this sound familiar?

A lot of talk around Oregon State has been centered on the Rodgers brothers, and deservedly so. But Sean Canfield has grown up since the last time we played him. And now he scares the ever-living crap out of me. To me, the key to beating the Beavers lies through somehow stopping him.

If you were the defensive coordinator, how would you gameplan against Oregon State?

After the jump, more on Canfield, and enter the Rodgers brothers.

What you see from Canfield is a natural ability to read and react to what the defense is giving him. He's become particularly adept at breaking down

This might sound familiar to Cal fans because this is exactly what happened in 2007, when the Beavers came into Memorial struggling, and Canfield considered . Although he only threw 18 for 33, he did lead OSU on two second half scoring drives via a similar style of offense, albeit sans Quizz.

If there's any issue, it's that he has taken a lot of sacks. While you might be quick to fingerpoint the offensive line, The VD Special disagrees and lays the blame on the shoulders of the quarterback himself for getting decked.

Our sacks are up this year, but if you watch our games, its due more to Canfield holding onto the ball than line break down. We only replaced 2 starters from last year. Our Center, Right Tackle, and Left Guard are all the same. And our new starting left tackle was considered one of the top offensive lineman as a senior last year.

I think our stats are again misleading at this point due to our annual Oregon State early struggles. Things should even out by the end of the year.

Now this leaves an interesting dilemma for Gregory. Canfield's "holding-onto-the-ball" tendency leaves you wondering whether the Bears will dial up the blitz. He seems like the perfect candidate for some delayed blitzes, or maybe some stunts if Gregory isn't comfortable sending extra men. Anny sort of pass rush generated could be huge in stalling the Beaver offense, and Canfield did show in several games this season (especially against Cincinnati's 3-4) that he does not seem comfortable throwing out of the pocket.

On the other hand, from watching the video above, Canfield also doesn't seem intimidated by the pass rush and can rip off some HUGE throws to the usual "unknowns who will in 3 years become prized NFL starters". Plus Cal's personnel lacks a single strong pass rusher to get at the quarterback. So you're stuck in a dilemma--if he sends the blitz and the offensive line can stand in there long enough, the Bears are vulnerable to getting burned deep and losing control of the defense early. If you don't send additional men for pressure and keep guys in coverage. What would be your choice, death by slow burn or firestorm?

Now, onto the badass midgets... 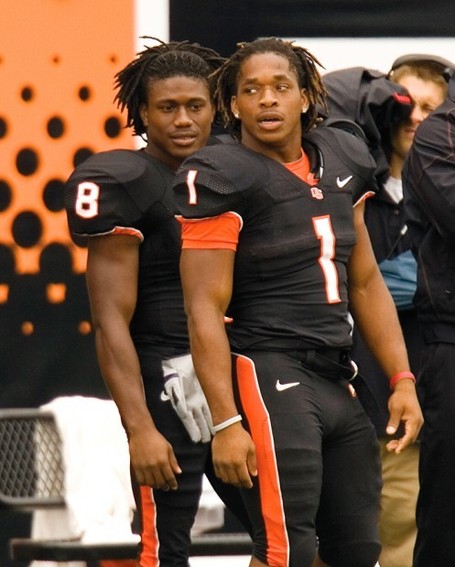 Because the Beavers are already well out of the Pac-10 race, Jacquizz Rodgers's second season in the trenches has gone unnoticed. That sucks, because his 2009 campaign has been even deadlier than his 2008 one. As AERose notes, the big danger in Jacquizz is he can kill you both ways. Not only are his running numbers on pace with last season's, they're more efficient yards (5.36 as opposed to 4.84 yards per carry), and he's racking up all-purpose.

He’s second in catches with 49 and third in yardage with 371. For comparison, Quizz has more catches than Cal’s top two pass catchers (Marv and Best) combined. OSU’s been chucking it more than Cal and at a better completion percentage whereas Cal has more options to spread the ball around, but still, Mike Riley obviously believes he can use Quizz on every down and it looks like he’s right.

(Also btw Quizz is the second leader in the Pac-10 in rushing yardage, so he hasn’t disappeared though if you look at the rushing stats it’s wild that Rodgers provides 90% of Oregon State’s rushing yards whereas Best provides more like 60% of Cal’s ground offense. Interesting to see that through 8 games Cal is outrushing Oregon State by 500 yards and 1.5 ypc.)

Even worse, between the tackles, there's nothing more formidable than Quizz. Although the Beavers O-line deserves a good deal of the credit for disguising exactly where he is behind them, Jacquizz is the one cutting through the blocks, slipping off tackles and finding a hole to bust through. Check out those touchdowns against the Furd and see the Cardinal front seven aim to tackle, bounce off him and FAIL.

Stanford at Oregon State '09 (via thomasg86)

Brett Johnson talked about the difficulty of trying to take the little man down.

"(Jacquizz is) hard to tackle, because he's fast, shifty and low to the ground," Bears safety Brett Johnson said. "I'm kind of a taller guy, so I practically have to get down on my kneecaps to tackle the guy."

You can imagine the issue most defenders have. Trying to reach down and tackle a running back of his size. Does anyone know the best way to properly tackle him (and by proxy, his brother) down?

While Quizz is the outside threat, James is the one guy on the outside to look at. Obviously Syd'Quan will be playing him on conventional receiver plays, but what about when they run the fly sweep? Oregon surprisingly ran little outside zone against us last year and ditto USC; a lot of their big running plays went straight up the middle or via inside zone. Oregon State will probably not deviate as much from inside, since they don't want to run Quizz into the ground like they did last season. It'll be interesting (and by interesting, I mean excruciating) how well the Beavers can attack us with any outside rushes.

Cal's defensive line needs to be stout again and try to find ways to penetrate into that Beaver backfield. Unfortunately, with Derrick Hill not likely to play, I'm not exactly sure how good a job they can do in the middle. You just feel the linebackers will try to play close up in support....that'll leave the middle open for Canfield to throw to Halahuni or Adeniji and the flats open for screens to James or dumpoffs to Quizz...ugh.

Indeed, this season the Rodgers brothers continue to do more and more for this team than even last season, which might make you fret as a Beaver fan going down the stretch--an injury to one of these guys and OSU's offensive production gets nearly cut in two. But for now, they are a looming danger, and depending on what happens between now and December, could be ready to spring a trap on Oregon's celebration plans in the Civil War.

I said a few weeks ago that I didn't really feel Gregory and the defense had underachieved. This would be the perfect week for them to start overachieving.

For all the hullabaloo about Cal's Wild Bear formations, Oregon State's Wild Beaver formation has quietly been adapting the strongest version of this particular strand of offense. Moreover, like Vereen, Quizz can throw in the end zone! Except he does it in the first quarter, when it's not insane to try a running back throw.

And here he is taking the direct snap.

So if you look at an all-around football game, although Jahvid runs better, because he can't break tackles as well as Quizz, because he's a step behind Quizz in the receiving game, and because he can't pass, on the college level...*gritting teeth*...Quizz>>Best. In that sense. Ugh.