Looking Back At Arizona State: Playaction & The Domino Effect

Share All sharing options for: Looking Back At Arizona State: Playaction & The Domino Effect

During the 2009 Cal @ Arizona State college football game, Arizona State scored on an 80 yard touchdown pass.  Who was to blame for this defensive error?  Most football fans use a general rule of blaming the closest defender to the offensive player.  On this particular play, that was safety Marcus Ezeff.  Such however, a rule isn't always correct.  The closest defender to the intended receiver is not always the player at fault for the completion.

On this particular play, the defender who is more at fault for the touchdown is a cornerback, who is away from the intended wide receiver.

Here is the play at issue (please excuse my poor quality images, I no longer have photoshop on my computer): 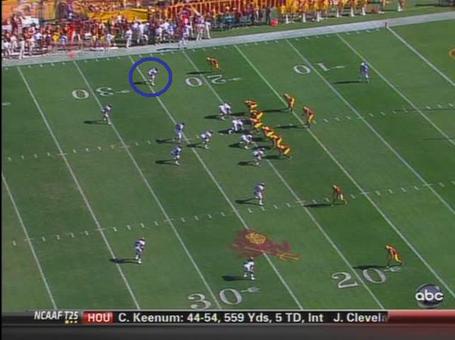 Arizona State is facing a 1st and 10 from their own 20 yard line.  Cal lines up in its 3-4 defense showing a two-deep look and with the cornerbacks showing man coverage.  A two-deep defense is a defense which has two deep defenders each guarding the right and left deep halves of the field. 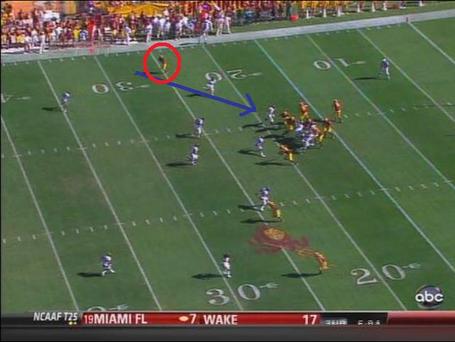 The defensive error occurs at the snap of the ball.  Conte, Cal's left cornerback (the defense's left) reads run, and bites down on the playaction, leaving the WR that he is supposed to be covering completely undefended.  I've shown Conte's pursuit with a blue arrow, and I've circled the ASU WR in red. 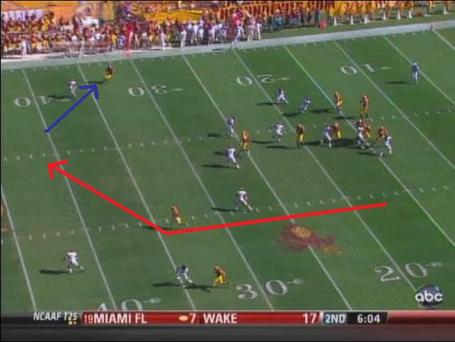 The Cal safety to Cal's left side of the field presumably Cattouse or Johnson, leaves his deep 1/2 of the field and jumps down to defend the wide open WR along the sideline that Conte left unguarded.  I've shown the Cal safety's pursuit with a blue arrow.  This opens up the deep 1/2 of the field opposite of Ezeff (Cal's right safety)- which is not Ezeff's responsibility.  The ASU WR whom the pass was thrown to runs a deep post. I've shown the ASU WR's route with a red arrow. 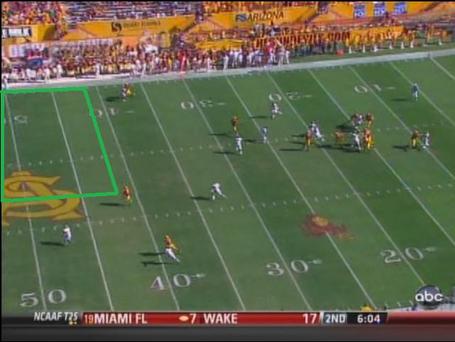 As you can see from the above picture, Cal's left deep 1/2 of the field is completely wide open.  I've shown this area with a green box.  This is the area that Cal's left safety should be covering. 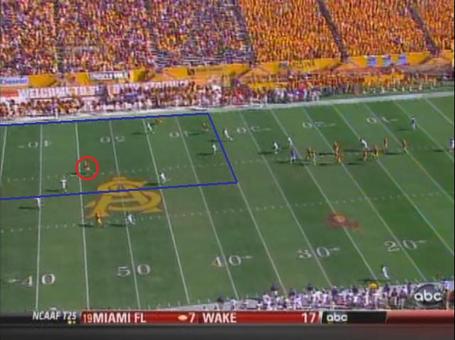 Below is the play in its entirety (youtube video below courtesy of ieeebear):

Some people might think this play was a corner blitz and Ezeff had man coverage responsibilities on the ASU WR.  This conclusion is incorrect.  Had Conte been blitzing, he would have placed himself on the line of scrimmage, pretending he was trying to jam the WR he was covering.  Such an act would place Conte closer to the QB and would decrease the amount of time to get to the QB on his pass rush. Conte did not do this.  If Conte was on a blitz, he more than likely would have continued his pass rush - but like most defenders who are fooled by playaction, he stops his approach on the ball fake and heads down the field to resume his blown coverage.  Conte does this.  Furthermore, if Conte was blitzing, then Cal's left safety would have had man-coverage responsibility on the WR that Conte was pretending to cover.  Thus, Marcus Ezeff would have been the lone deep defender to cover the entire field and he would have aligned himself more towards the center of the field and not so wide to the right.  Ezeff did not do this.

We were in a two-deep.  It probably wasn’t the best call in the world.   It was first down and we were taking a shot because they had run it a bit on first down.  It was a play-action pass and we lost our middle linebacker and we also lost our backside safety on the play-action pass.  They kind of jumped at the run a little bit quick as opposed to playing back a little bit.  It was a combination of not great technique and I could have had a better call on first down.

Indeed, Gregory is correct.  Cal was playing its 3-4 defense in a two deep - meaning Cal had two deep safeties each covering 1/2 of the field.  This is not to be confused with a Cover-2 defense.  A Cover-2 defense involves all zone coverage.  But a two-deep implies that there are two deep defenders and the rest of the coverage is not zone coverage.  Gregory clearly made this distinction.  If you look at the play, you'll see that indeed, Cal is playing two-deep with man coverage.  Both cornerbacks Conte and Syd'Quan Thompson are locked up in man coverage. The linebackers appear to be in zone coverages (except for Young who is pass rushing).

Had Gregory would have called up a corner blitz, he probably would have mentioned it in his quote.  Furthermore, the resulting playcall would have put Cal into a 1-deep coverage and Gregory specifically states that we were in a two-deep.

It only takes one defender to make an error on the field to give up a touchdown.  That defender doesn't even have to be the defender nearest the intended receiver or the ball carrier.  In this play, Conte was far from the intended WR.  Yet his mis-read of the offensive play as a run instead of a pass caused a domino effect.  His error caused him to leave his ASU WR undefended.  This caused Cal's left safety to vacate his deep zone to cover the ASU WR that Conte left undefended.  This allowed ASU's intended WR to catch the ball in Cal's left 1/2 deep zone where the Cal left safety should have been.