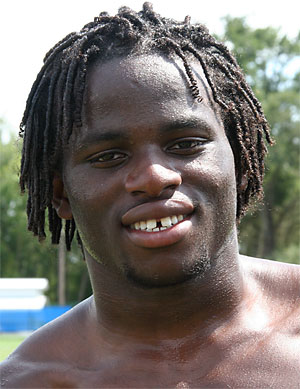 Owa is one of my favorite players in this class (not just a beast, but bright as can be), and I'd be overjoyed if the Bears could get him. He talks about his mother and his upbringing in this interview with GatorBait.

Her Nigerian name is Abieyuwa. Odighizuwa credits her with the central role in his success, and she seemed overjoyed Tuesday. She realizes, however, that there is still a lot of work ahead.

"He needs to decide where he is going," she said. "I have told him to find a school and people he can be comfortable with. I do not want him to regret his choice. Wherever he goes he needs to get his degree and be happy with his school and community."

She said her son is a wonderful person and this whole experience has been a "dream."

Odighizuwa was born in the U.S. and at a young age was sent to live with family in Nigeria. Five years later he returned, and she feels this helped him understand his African heritage and roots and to appreciate all the opportunities here.

AB is finishing her second degree and will pursue a medical field. Odighizuwa has three brothers (two were with him on Tuesday, and they both attend David Douglas. His youngest brother is still in grade school).

However, Cal might have to brace for a late surge from the Quack Attack. solarise says that "Owa had been favoring Cal before his unofficial visit to Oregon, but the Ducks’ play definitely made a positive impression."

I loved the visit. I thought it was one of the best visits I’ve been on this year," he said. "The atmosphere was great and they just played a really good football game. It was a really great trip.

Owa is scheduled to be at the UW-UCLA game this Saturday. More recruiting visits and performances after the jump!


Stills is looking at Cal and UCLA locally, and plenty of your finest football institutions outside.

"I have Oklahoma (Nov. 14), Michigan (Nov. 21) and Florida (Nov. 28). I'm trying to decide between Oregon and Miami for my last visit. Oregon looks great right now and I've always liked Miami a lot. They haven't offered me yet, but sound interested and I can't see them tripping me out there unless they wanted to offer.

"Locally, I'm still looking at Cal and UCLA. If I stay close to home, I'm leaning to Cal right now but Florida and Oklahoma are both really intriguing to me. Florida loses all their playmakers after this season and Oklahoma has a great offense for a receiver."

Also, he's looking to bring a lot of players with him whereever he goes (HT chowder!)

"I talk all the time with Brennan Clay (San Diego, Calif./Scripps Ranch), Tony Jefferson (Chula Vista, Calif./Eastlake), Joshua Shaw (Palmdale, Calif./Palmdale), Ronald Powell (Moreno, Calif./Rancho Verde), a few others," Stills said. "There’s a good chance a lot of us could be at the same school next year and that would be great.

Big ups to chowder for finding this.

After checking out Cal a month ago, Uko has three more Pac-10 visits set up this month. The Bruins have been on and off Uko’s list multiple times since last spring.

"I’m looking at UCLA mainly because of coach (Rick) Neuheisel," Uko said. "He’s personally recruiting me and is the only head coach that I’m talking with. He’s probably recruiting me harder than anyone else and I also like the opportunity to play right away at UCLA.

chowder's commentary: "Guess he hasn’t heard that Neuheisal told Morrell Presley he’d be the leading receiver in the country this year if he went to UCLA. Yes, the same Presley that caught 2 passes for 2 yards with a long of 2 against Cal this year."

Looking wayyy ahead to the class of 2011, Thoroughbred gives us this great look at a quarterback Cal his had its eyes on for awhile, Cody Kessler. You can see some video where he expresses a strong amount of interest in the Golden Bears. Kessler will actually be visiting this weekend for the Cal-Oregon State game.

Finally, here are some updates on other possible prospects, including more on a duel between Stills and Ricky Seale, courtesy of solarise.

Jay Guy, DT, will be continuing his whirlwind recruiting journey, this time to Nebraska. Although he decommitted from Cal earlier, he's still leaving us very much in the mix.

After falling behind by 20 in the third, Warner Robins scored 21 unanswered fourth-quarter points for a 21-20 win over the second-ranked rival Northside.

Coach said there is no other feeling like when you beat Northside," Warner Robins defensive tackle Jeffrey Whitaker said. "You know, he’s right. It feels pretty good. It’s pretty special with the heart we showed.

Lache ran 22 times for a game-high 117 yards & 1 TD in Temple High’s 17-6 loss to Belton. He didn’t make his schedule official visit to Oregon over the weekend due to a scheduling mix-up with the family. USC is considered to be the favorite.

Escondido Cougars’ Ricky Seale broke the San Diego Section career rushing record on the game’s first series, scampering 28 yards for a touchdown. However, the 2nd ranked Las Costa Canyon Mavericks rolled up 407 yards on the ground to a 44-24 victory. Seale was held to 34 yards in the second half after carrying 26 times for 178 yards in the first. The Mavericks delivered a 64-yard bomb in the first to coveted wideout Kenny Stills. Stills finished the game catching 2 passes for 75 yards and a TD.

Ricky Seale discussed the friendly rivalry between him and Kenny Stills. (via 619 Sports)

Hinder lead his Sailors to a 51-0 halftime lead, cruising to a 58-13 victory over Buena Vista. Hinder was 10-16 for 148 yards and 3 touchdowns, and ran for a 64 yard score. Coming up is their stiffest test this season, playing the defending state champions Glenwood.

Whiteside was out with an elbow injury last week, and his coach Jeff Brinkley isn't sure when he'd be ready to come back. Newport Harbor's quarterback isn't certain he'll even return this season.

Adcock's team was on a bye this week. They wrap up their regular season with Senior Night, playing T.K Gorman Catholic School from Tyler.

Carter continues to shine as his team faces off against West Adams Prep in a matchup that'll determine the Southern League champion.

Santee, however, has the league’s best player in Tevin Carter, a nationally-ranked player who has committed to California.

Crosthwaite and his O-line counterparts continued to dominate the line of scrimmage, helping Cathedral's running game accumulate over 400 yards in a 34-3 victory over Patrick Henry.

Still not sure if Dunn played in his team's 42-7 dismantling of Scripps Ranch. He'd missed the previous week due to a knee injury.

Forbes forced one fumble and rushed for a 13 yard score in a 24-14 defeat to Linganore.

Bishop Gorman completed an impressive undefeated season by pasting Clark 61-0, outscoring all opponents by a combined score of 541-44. Gibson's O-line managed to unleash not just one, but TWO running backs with 1000 yard seasons. Their playoff run begins against Cheyenne.

Harper had another unbelievable game, returning a punt return 67 yards for a score, catching 60 yard and 38 yard passes for two more TDs, and ran another one for 65 yards, as St. Mary's routed McNair 66-0. They play Tokay this week.