Fans love the long ball. They love the home run, the 50 yard football spiral, and in basketball, outside of maybe an alley-oop, they love the dagger 3. Nothing is more admired in sports then going for the jugular, and the 3 pointer is the ultimate silencer.

It's definitely the reason most Cal fans love Jerome Randle. Everyone remembers the eight 3 pointers to give Cal it's first win in Tucson in 13 years. They remember the triple (the only one he hit that Saturday) to send the epic UW game into another overtime. They remember the 3s that kept the Bears from getting blown out during the late season stumble, and the 3s to distance ourselves against good home competition.

What a lot of people miss about Randle though? He can kill you inside. I mean really really kill you. Randle might've been accurate from long-range, but he was even deadlier inside--53% from 2 point range, 41st in effective Field Goal percentage last season, on par with Ty Lawson. The cat isn't just Jason Kapono--play him hard outside and you risk getting burned on the drive. He might be one of the best in the country at splitting the double team, passing on the run and into the trailer, getting into the paint and finishing. His teardrop/floater is a thing of beauty, and if you try to leave him you're in danger of giving up an alley-oop to Christopher.

You wouldn't be too far off saying that Randle is Cal's best scoring threat both inside and outside. Let him loose and you're in for a long night. More on Randle, including his highlight reel, after the jump.

What needs to be worked on: Defense. Due to his diminutive size, Randle was never expected to be a lockdown one-on-one defender. In an interview with Sporting News, Randle talks that he has improved on the defensive side of the ball.

SN: And you, how are you better this year?

JR:I don't know, man, just smarter about everything. I don't know how the year's going to go for me, but I know I worked my butt off this past summer to get stronger and become a better defender. Just do things that I know people criticized my game about, and that's exactly what I'm doing. But in the end, I'm still Jerome Randle, and I'm still going to be Jerome Randle. I need to be good at everything and great at one thing; that's what I'm trying to be.

SN: What's the one thing you need to be great at?

We'll probably see how much he's improved in out-of-conference play, but at least the work ethic is there.

Stat to watch out for: Minutes played. Both Christopher and Robertson saw heavy action too, but no one was on the floor more for the Bears than Randle. He played three full games, including the last two of last season, four 39 minute games and one 44 minute overtime game, four 38 minute games, three 37 minute games...you get the point. Randle only played under 35 minutes three times in conference play, and only once after January 8th.

Yes, his production never really dropped off, but that was part of the problem--the Bears became too dependent on Randle's abilities and the offense outside of him stagnated. It was hardly a surprise Vasquez outplayed him in the tournament; Maryland gameplanned solely against his abilities in the 2nd half, and no one else could step up to shoulder the load.

Backup point guard development will be crucial here. Although Gutierrez will probably handle most of the ball handling duties when Randle is off the court, Brandon Smith or Nikola Knezevic playing 7-10 quality minutes a night could go a long way to keeping Randle rested and ready for the stretch run. Too much PT could spell another early exit in March.

Most interesting one-on-one matchups: Sherron Collins of Kansas, Nic Wise of Arizona, Isiah Thomas of Washington. Thomas and Wise are the other two point guards in the conference to watch out for. However, Cal went 4-0 in their matchups last season against these two schools, and Randle did have very good games in all four. Arizona is weaker this season and Washington held steady, so hopefully there should be some sizzle in a few of the matchups there with a good shot at victories in all four games.

But it's ultimately the pre-Christmas clash with Collins that everyone should tune in for. Not only could it show whether the Bears are actually sturdy enough to win tough games away from Haas, but it could also determine whether Randle is good enough to duel with the best in the country. A great performance in Allen Fieldhouse against the top college point could go a long way toward convincing scouts Jerome is NBA-material. 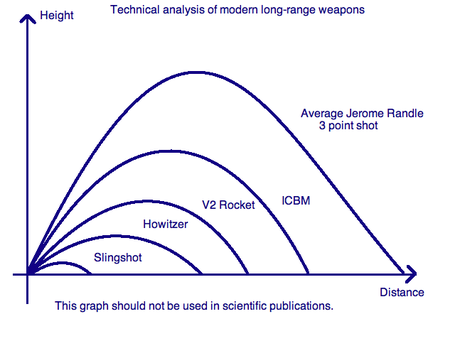 Media myth: Randle is dependent on the 3 point shot. Rags cleared up this misperception last spring.

See, the Bears high 3-point percentage is not simply because the team is loaded with outside threats. Yes, Cal has three very good guards (Randle, Christopher, and Robertson), but what they really excel is not just outside shooting, but in prudent shot selection (Theo in particular is exemplary, almost to a fault, in this category). For even though the Bears lead the nation in three-point shooting percentage, they're in the bottom twenty in the country in three-point attempts as a percentage of their total field goal attempts -- less than 25% of their shots are from beyond the arc. Basically, they will take -- and make -- open shots, but if it's not there, they're generally not going to force things.

This leads to the other interesting stat; again, despite shooting so well from beyond the arc, less than 25% of their points come via the three, putting them in the bottom quarter of the NCAA. This, of course, begs the question: if the Bears are so great, why don't they take more threes? Well, besides the fact that Cal tends to shy away from marginal shots, the Law of Diminishing Marginal Returns will reduce the value of additional three-point shots

In fact, when the Bears play well, they generally don't take more than 12-13 long range attempts. They tried a season-high 24 in a loss to Oregon State last month, and put up 20 attempts in last Saturday's loss at OSU. Discounting the 3OT Washington game, those are the two highest totals of the year, both losses. They tried 19 in a loss to Florida State, 16 in a loss at USC, and 15 in losses at UCLA and Stanford. Only in their blowout loss at Missouri did they remain selective from three (6-13). Despite the lack of a dominant post presence, the Bears' offense still revolves around getting inside and putting up high-percentage shots.

Those percentages didn't change all that much the rest of the season, although Randle did end up taking a lot of 3s.

Randle worked hard this offseason with some of the best in the NBA.

Randle spent most of his summer in Chicago, working out from 7 a.m. to 8 p.m. with NBA players Will Bynum and Gilbert Arenas. He returned to Berkeley with a renewed commitment to defense, and Montgomery told me he is the player most likely to assert his leadership in the locker room. "Jerome cares a lot," Montgomery said. "He's very competitive and tends to get down on himself too much. But he can shoot with anybody and he's doggone quick."