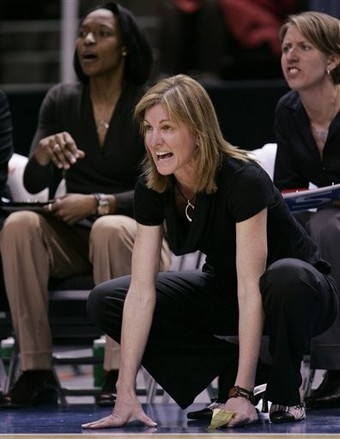 Another season of amazing squatting for Joanne Boyle begins. How does she do it?
This is a preseason game against Vanguard, and can be seen on CalBears.com. Click here for the stream link, it should go live around 6 PM PST. You can also follow it on Gametracker. For those who want to catch up on this team, check out this season preview of Cal women's hoops by norcalnick!

After the jump, a little bit of info on Vanguard.

Vanguard women's basketball has been used as the stomping ground for Bay Area schools, this season and last.

The Vanguard Lions, the 2007-08 NAIA Champions, are ranked No. 2 in the 2009-10 preseason NAIA poll. Vanguard will be playing an extremely challenging exhibiton scheulde. It kicks off at Stanford on November 1, the first of three consecutive playing days. VU continues the sweep through the Bay area at University of San Francisco the next day and finish with the exhibition on Tuesday, Nov. 3 at Cal. The Lions leave the Bay area to head directly to Arizona for a date with Pac-10 third place team Arizona State University on November 5. Returning home briefly after the Arizona match up, the Lions then fly to Connecticut to face the National Champion Huskies.

In their exhibition against Stanford, the Cardinal posted a dominating 107-49 win over the Lions, although neither the results nor the statistics count for either team's regular season records. The Lions had three players in double figure scoring, led by 2009 All-GSAC and NAIA All-America Honorable Mention guard Bridgette Reyes with 14 points and four assists. Senior Rachel Copeland and junior Sarah Boyd added 11 and 10 points, respectively. Trailing 49-27 at the half, things got worse after intermission as the Cardinal made 11-of-18 three-pointers to add a 58-22 advantage to the second-half scoreboard. The Lions were out-rebounded 55-33 and shot only 29% from the field and 24 percent from the three-point line with 16 turnovers in the game.

Last season against Vanguard, Cal earned an 87-37 victory in its final exhibition game of the year. Vanguard began the game strong, going up by two points, 8-6, in the first four minutes of the game. The Bears erased the deficit, scoring eight straight points and mounting a 26-2 run over the next eight minutes to get the game well in their control, shooting 58.1 percent in the first half. The Bears defense also looked solid in the tune-up. The Cal defenders did not allow a single three-point basket, with the Lions shooting 0-18 from long range. Overall, the Bears' defense allowed the Lions just 13 makes on 54 field goal attempts for a 24.1 percent shooting efficiency from the field. Alexis Gray-Lawson led the Bears with 21 points, which included hitting seven freethrows. Ashley Walker scored 20.

Where is Vanguard? Why it's located in the OC!

Yeah, so you can consider it USC v2.0! Or something. Whatever. Get this season started Lady Bears!