My choice for the ugliest Cal football victory is the 20-10 Cal win over Rutgers in New Jersey.  Ragnarok didn't make his description of the game depressing enough, so I felt I needed to write something up.

At the beginning of the season, the Straw Hat Band was excited to go to New York City and play Rutgers.  All the seniors had made plans to go, it was going to be a big fun time, and the underclassmen were desperately trying to get on the list.  I was fortunate as a junior to be on the list, mostly because the seniors in my section were lame and I had good attendance.  Two of my friends had spent all summer planning the trip for the Band:  buying the plane tickets, finding hotel rooms, making the schedule.  And then the Tuesday before the game, only four days before we were supposed to leave, there were the September 11 attacks.  Everyone knew immediately that the game would be cancelled...we were supposed to fly into Newark...but would they even bother to reschedule the game?  We were at war... were we even allowed to play football anymore?

Why bother even playing Rutgers?  They were 2-8...a record almost as bad as Cal's.  The trip was going to be expensive, and they had rescheduled the game for Black Friday, the day after Thanksgiving.  But if the football team was going, the band was going to go.  So my friends started organizing the trip again--even though one of them already knew she wasn't going to miss Thanksgiving with her family for a football game.  In fact, a lot of the seniors that had been picked to go to New York City changed their mind about missing Thanksgiving, which meant spaces were opened up to underclassmen.  I'm not even sure we took a full group, so many people dropped out.  Some of the Straw Hat Band volunteers took a fatalistic approach to the game:  "Well, at least I'll see one win this season, even if it is against Rutgers."  (Imagine the name "Rutgers" pronounced with an angry sneer.)  Others, like me, were just excited to see New York for the first time.  I hadn't even been to the East Coast. 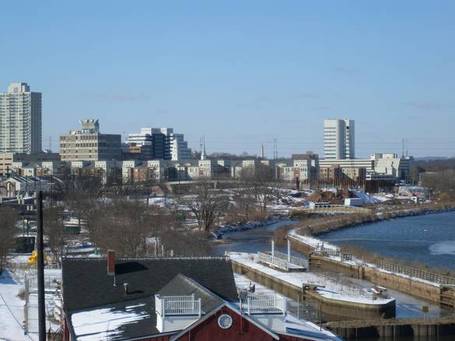 The Band left campus Wednesday at 8am, and with a stop in Minneapolis, we didn't arrive at our hotel in New Jersey until 11:00pm.  But we needed to see at least some tourist spots so we took a NJ Transit train at around midnight into New York City.  We saw a lot of the sights (in the dark), but I will always remember our trip to Ground Zero.  They were doing most of the cleanup after dark by that point, hauling huge chunks of disfigured metal out of the site on flatbed trucks.  They did it late at night so they wouldn't disrupt traffic.  I remember on the walk to Ground Zero seeing a flatbed hauling an enormous I-beam and not making the connection, thinking, "What construction site is he going to this late at night?"  But once we got to the World Trade Center, and there were four or five flatbeds carrying the same cargo--huge pieces of crushed and twisted metal, it became obvious how big a cleanup was happening.  Because of all the work going on, the gate was open to the site and we got a pretty good, terribly depressing, look.  We stayed in New York City all night and watched the beginning of the Macy's Thanksgiving Day parade.  (I didn't care for it--too many people.)  Thursday afternoon we ate Thanksgiving dinner with the football players.  They put away so much food.  And I don't think I'll ever see Gatorade at Thanksgiving again.

On Friday, the game was at 1:00pm, so we were up early.  It's about a 30 minute drive down the New Jersey Turnpike to get from Newark Airport to Rutgers, so we got to see "scenic" New Jersey.   If I wasn't sure New Jersey was a pit before my visit, the bus ride from our hotel to Rutgers confirmed my suspicions.  All I'd heard about New Jersey was from David Letterman's jokes, and it turns out he was right.  (Before I get any angry comments, I will say other parts of New Jersey--for example what I saw on a train ride to Princeton--looked very nice.  But Trenton and Newark suck.)  I can say I remember nothing about the Rutgers' campus.  Maybe we didn't even visit it.  The Rutgers' stadium was terrible, slightly better than the old Oregon State stadium.  Except Rutgers did one worse than OSU--at least Beaver fans came to the game.  The crowd was terrible, and Rutgers didn't even have their full band there.  It was some sort of half-assed alumni band.  They were wearing t-shirts and slacks, and they didn't even try to put on a halftime show.

The "R" stands for "Really sucks."

When Ragnarok said, "It was like watching a pair of kittens fight, except that each kitten was trapped in its own, separate paper bag," he's accurate--except that a kitten in a paper bag might be cute.  This game was more like two recently caught fish--desperate because they are drowning in the air--flopping around on the same boat deck.  Except with more false start penalties.  To say it reminded me of watching a high school football game is wrong--my terrible high school football team was better.  Some of the most bitter band seniors talked about the Rutgers game being "the Toilet Bowl," but at least toilets serve a purpose.  But see, those jokes don't do the game justice.  Instead, imagine a depressing Cal loss...more depressing...throw in some terrible turnovers...just a little more depressing...OK, it was that soul-crushing and we won.