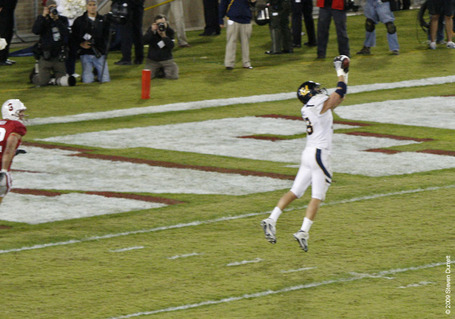 (Have we come up with a name for this play yet? Check out the rest of Durrett's photos here!)

Hopefully the people who watched last night's Texas-Texas A&M and saw how the Aggies gagged it away due to aggressive defensive playcalling. Norcalnick has more:

If anybody complains that Gregory should blitz more I’m going to direct them to watch this Texas- Texas A&M game. A&M keeps forcing 3rd down, then sending idiotic 6 man blitzes and McCoy takes advantage of single coverage to convert. He’s been burning them all game. Their d coordinator is a moron.

Although I know most of you aren't a fan of the way the Bears sit back in zones much of the time, this strategy does have its merits, and it would have worked perfectly in last night's game. Instead we're one step closer to the inevitable SEC-Texas title game that we've been anticipating since last January.

Oh, and it should be noted that A&M missed a crucial short field goal late that ended all hope for them. Why'd they miss the chip-shot? The ball was placed on the right hashmark rather than centered in the right place. Hmmm...

Not saying this makes the decisions Tedford made last Saturday right or wrong, but weird stuff happens in rivalry games. You'll never convince me otherwise.

After the jump, a look at today's schedule!

Anyways, while the crazies among us are trolling the Walmarts and the Best Buys of the world, the rest of us sit down and enjoy one of the best weeks of college football for Cal fans--two days of rivalry games, plenty of Pac-10 intrigue, and no Cal game to stress ourselves out for!

On ESPN/ESPN2/ESPNU most of the rest of the day: Many college hoops tournaments--in case your interest in the college football season has died down, there's plenty of hoops for you to sample!

8 AM PST/11 AM EST: Rutgers at Louisville, ESPN2, Temple at Ohio, ESPNU--One of these games has big time ramifications in determining its conference's champion. The other game is Rutgers-Louisville.

9 AM PST/noon EST: Illinois at Cincinnati, ABC--This'll probably be your first glimpse of Cincy football in quite some time. Are they worthy of a trip to Pasadena?

11:30 AM PST/2:30 PM EST: The Iron Bowl, Alabama at Auburn, CBS--Can Auburn throw a monkey wrench into the SEC's quest for another BCS bid?

12:30 PM PST/3:30 PM EST: Nebraska at Colorado, ABC--This is either a great chance to scout for next year's Colorado-Cal game, or a good look at whether Nebraska has any shot at knocking off Texas in the Big 12 Title game.