Reveling in Victory - The CBKWit is out on the field!

Share All sharing options for: Reveling in Victory - The CBKWit is out on the field! 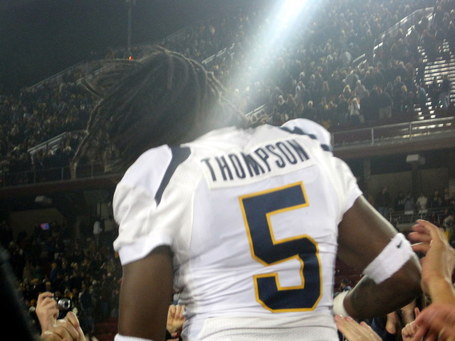 This picture proves what I've felt all along: Syd is divine.  I thought only I could see the beam of light which follows him everywhere, but now I have photographic proof.  And yes, standing this close to Syd, on Standfurd's field, after this game, was INCREDIBLE!

This is about as good as it gets, people.  It's my 8th Big Game, and this one ranks second on the list, following only the 2002 iteration.  That was my newman freshman year, and featured Cal's first Big Game win in eight years, a Big Game rushing record by one of the great student athletes of our time, Joe Igber, and Cal fans surrounding the sidelines midway through the fourth quarter, rushing the field, removing the goal posts, and parading them down Bancroft.  That will be tough to beat, maybe taking a Rose Bowl clinching victory over the furd to top it. 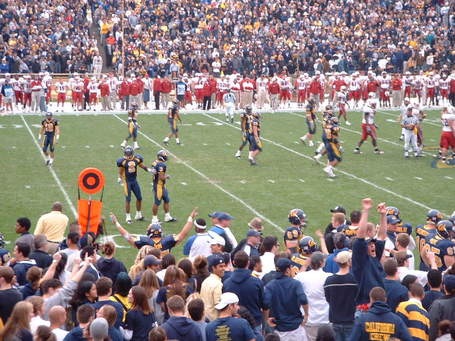 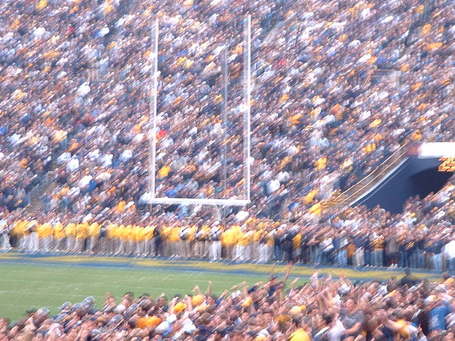 An impressionist's rendition of the 2002 Big Game 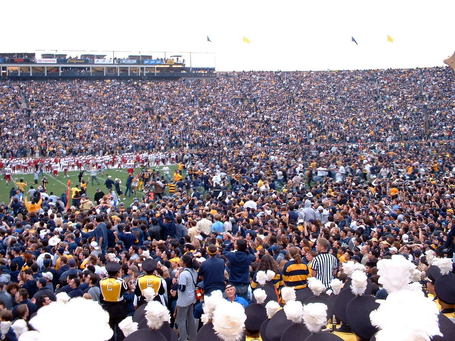 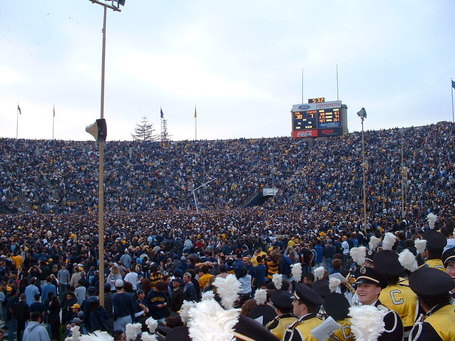 While Saturday's game did not surpass the 2002 Big Game, it did what others from the last 8 years have not: it came close.  These two are in a league of their own in the Tedford era, and beyond.  A friend of mine who has seen 20+ Big Games said this was one of the best he's ever seen, topped only by 2002 and possibly 1993.  What we saw on Saturday was one the 2 or 3 best Big Games in the 27 years since The Play.

Jeff Tedford is now 7-1 in eight Big Games.  For all the losses to usc over the years, and the 72-6 beat down, and another season without a Rose Bowl, and Gregory sucks and why doesn't he fire Alamar, and the kneeling on third down with 2:45 left etc. etc., he's 7-1 in Big Games.  Yes, Stanfurd has mostly been terrible over this stretch, but 7-1 following Cal's 1-7 Big Game record immediately before Tedford carries a lot of weight. 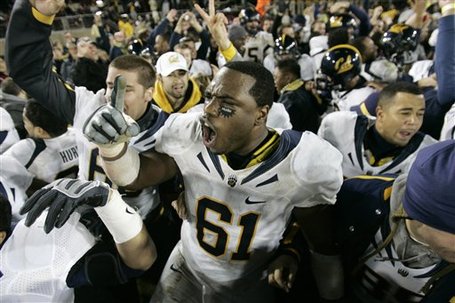 This win wasn't like 1982 or 2002.  There wasn't a singular reason why this game stands out, like The Play or the dawn of a new era, breaking a seven year losing streak with a new coach.  Instead, there are so many reasons why this game was so sweet, so many angles and points of interest that add up to a classic.  Stanfurd comes in as "the hottest team in the country," per every sportswriter covering college football.  They scored 100 points against teams that held us to 6.  They, not us, are the team that dethroned usc.  They, not us, have a chance at the Rose Bowl.  Toby Gerhart, not Jahvid Best, is a Heisman contender.

Of course, Jahvid Best is not only out of the Heisman race, he was also out of the game.  Toby Gerhart?  He made his presence known immediately, picking up 5 yards on the first play of the game and then taking a hand off 60+ yards for a TD on the third play.  The game was barely a minute old.  Toby ended the game with 136 yards, four touchdowns, and a host of Stanfurd school records.

Cal's had plenty of stars under Coach Tedford, but Big Game has featured an inordinate number of secondary players stepping into leading roles.  In 2002, tiny Joe Igber set a Big Game rushing record as Cal rolled.  Converted fullback Steve Levy threw a couple touchdowns down on the farm in 2005.  Tom Schneider kicked four field goals in turbulent winds, including a 50 yarder, to overshadow DeSean and Marshawn in 2006.  And Saturday night, Stanfurd's Heisman contender running back, the leading scorer in the country, was not even the best running back on the field.  Four touchdowns was not enough. 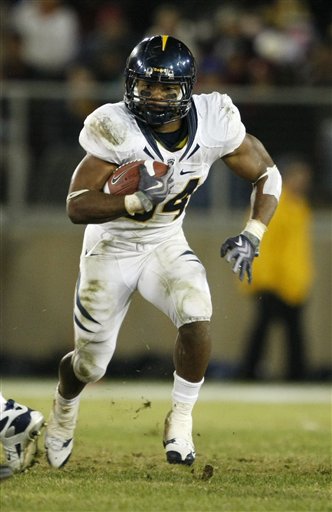 It may be a bit unfair to call Shane Vereen a secondary player.  He's much more of a "1A" than a second stringer as "backup" to Jahvid Best, and isn't the scrappy winner despite average athleticism like Igber or Levy.  He's a very talented player and was highly recruited for a reason.  He'd be the starter at many schools in the Pac-10 and across the country.  Still, if you were previewing this game, he'd only be the third runningback you'd mention, behind Gerhart and Best.

Saturday, he permanently etched his name in Big Game lore with 193 yards, 3 touchdowns, and 42 carries.  FORTY-TWO CARRIES.  That's the most ever for a runningback under Tedford, by a long shot.  He took direct snaps, he ran for countless tough 2, 3, 6 yard gains between the tackles, he never fumbled (though he did recover one for good measure, when Riley tripped in the first half), he had the presence of mind to get down in-bounds after his first down run to the Stanfurd 11, running 25 seconds off the clock.  He was blue collar, moreso than those yuppies in their wannabe MLB stadium and their doofus coach will ever be.  I ran into him on the field after the game.  He was wearing the hard hat, which is given to Cal's toughest or hardest working or strongest player of the game.  It doesn't matter, because he was all three.  I patted him on the back and said "You're a monster."  I only found out later that he carried the ball FORTY-TWO times, and I wished I had said even more. 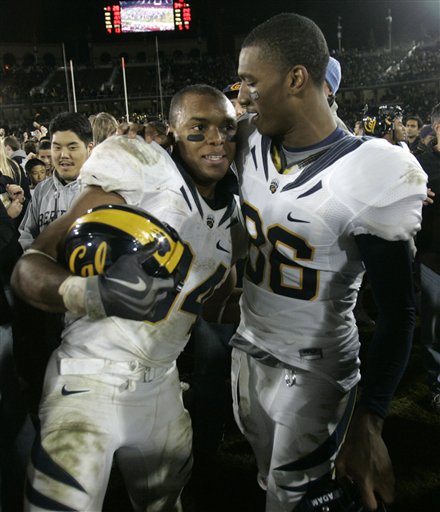 Shane, you earned that hard hat

That was not even the best moment on the field, nor was watching Syd shake his dreads from five feet away, nor was being the first person to shake Robert Calonico's hand after the band played Light's Out.  No, the best was finding the prophet Mohamed at midfield.  I grabbed him in a bear hug.  I said "You're the one who got the pick, right?"  I had to, because when he rose to the heavens to make that catch, I instantaneously embraced RemorsefulBruinBabe, my co-worker, and my co-worker's boyfriend in a group hug that lasted far longer than is appropriate for professional acquaintances and their significant others.  I barely saw him make the catch, and was buried in bodies by the time he slid to the ground to protect the ball.  The prophet answered my question with a nod, at which point I shouted something to the effect of "I call you the prophet gah can you take a picture with me??"  Between personally congratulating the guy who carried the ball FORTY-TWO times and getting a picture with the man who clinched the victory, in a span of 5 minutes, I doubt I will ever again have such a great time rushing the field. 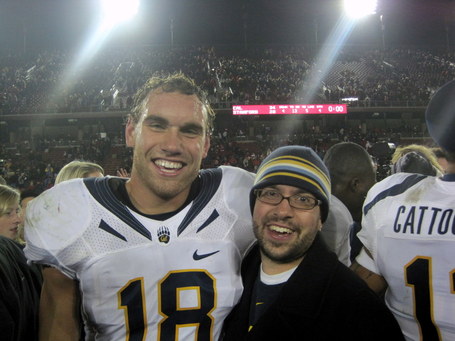 The prophet with HydroTech

I found CaliforniaBone and GoldBlooded in the Cal endzone.  They showed me their souvenirs. 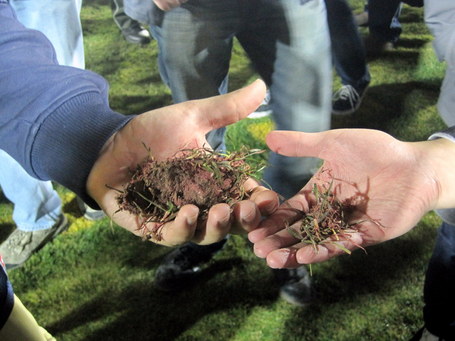 Thanks for the inspiration, guys.  I grabbed mine from the end zone turf and folded it into my campus map printout for safekeeping.

I met Chris Little and said "You're the real number four."  He laughed. 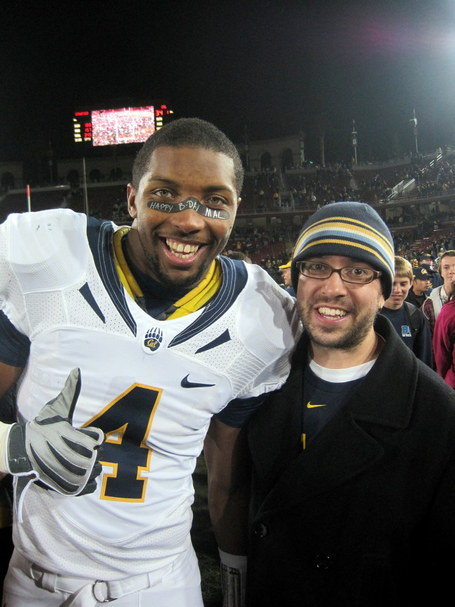 Most of the players had exited the field, but a few stuck around to take pictures with fans.  It was nice of the players - I'm sure that they wanted to be back in the locker room, with a hundred half naked sweaty dudes celebrating with their teammates, but once they took one picture, a mob would form.  Thanks for being good sports, guys. 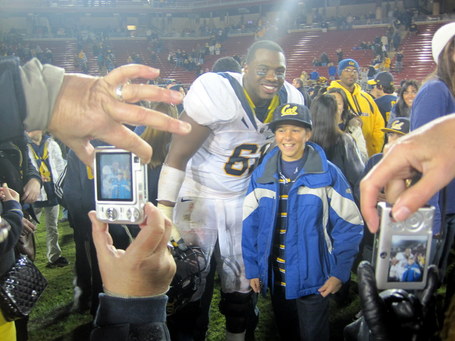 It was a delirious zoo down there.  Lots of "Bear Territory," "We've got the Axe," pushing, shouting, crazy-eyed smiles. 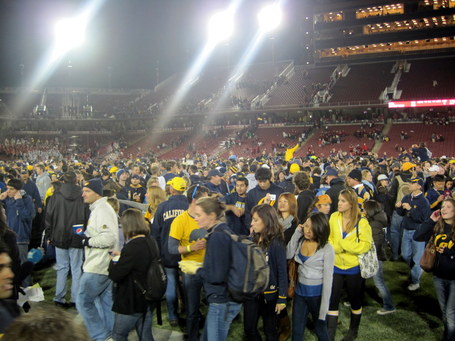 RBB and I made our way over to the band. 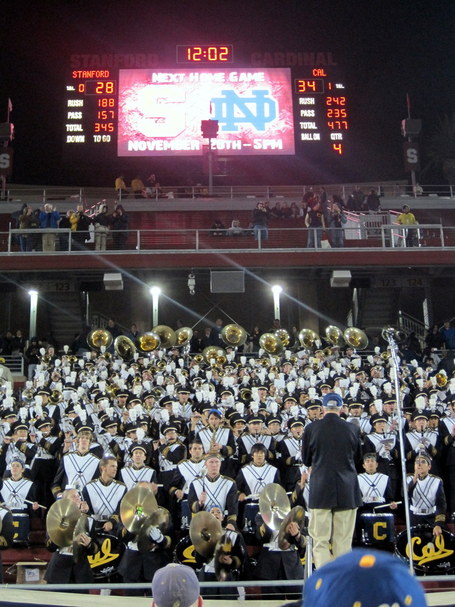 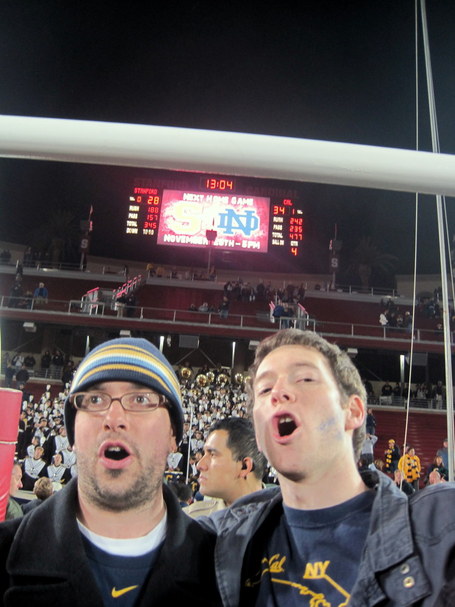 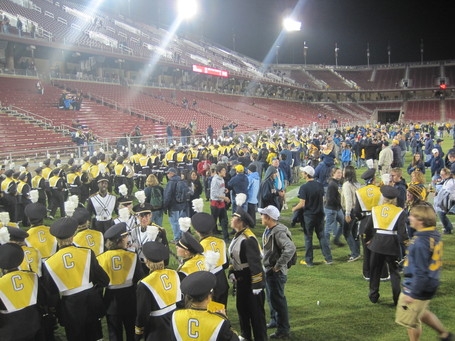 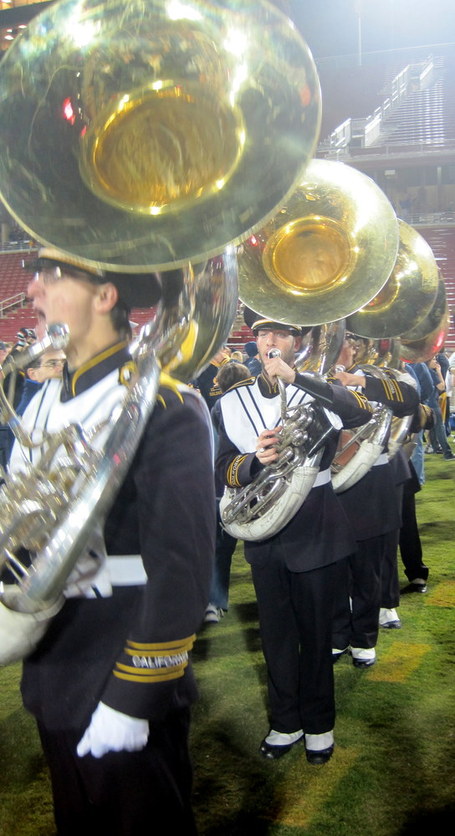 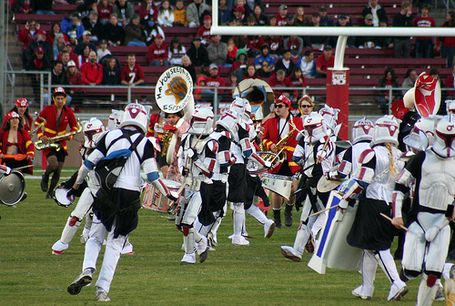 Ok, the Storm-trooper uniforms were pretty cool.  Some Stanfurd students have a lot of time and money - shocking! 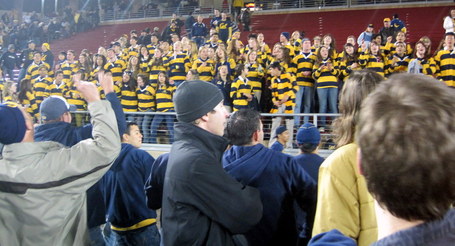 Yeah, this one was about as good as it gets.  It was awesome to see our offense reel off four consecutive long touchdown drives, after struggling to sustain drives for much of the year.  It was awesome to watch our defense play well in back to back games, holding an opposing QB to 10-30 passing, coming up with a game saving interception, and holding an opposing offense which had scored 100 points in two games to 28.  It was great to watch Harbaugh's arrogance bite him as Cal's defense stopped the furd on 4th and 8 from the Cardinal 22.  Seeing that bandwagon fan Tiger Woods show up for his first football game in a decade only to go home a loser (as much as one can be with a model wife and hundreds of millions of dollars) was great.  Hearing the Stanfurd Banned proclaim "Get a real bear" and in response shouting "Get a real tree" was great.  After hearing about Stanfurd's win the in the Big Splash and their director's cups and whatever else throughout the game, we won the one that really counted.  After suffering through no Theo and two bball losses, a big Freeze loss, and (this afternoon) a women's bball loss, we won the big one, the Big Game.    It was a fucking great day, a validation and celebration of all things good and a repudiation of all things bad.  This guy had a usc shirt on under his Stanford sweatshirt: 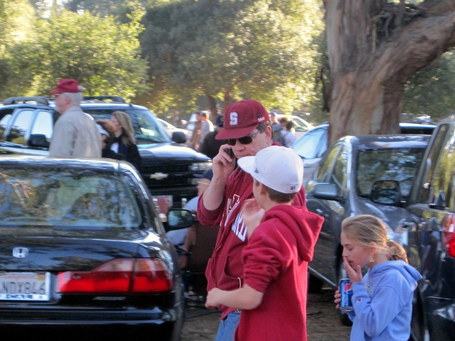 That's what you get, buddy.

There was (and still is) just so much to revel about.  Shane Vereen, the prophet Mohamed, the defense standing up without Syd in the fourth quarter, Tedford winning in his 100th game, dominating the line of scrimmage on both sides of the ball, Shane Vereen again, coming back from 14-0, rushing their field and making it Bear Territory.  So, my question to you is, what are you reveling about?  Any one item in particular?  All of the above, and more?  Or simply, the fact that: 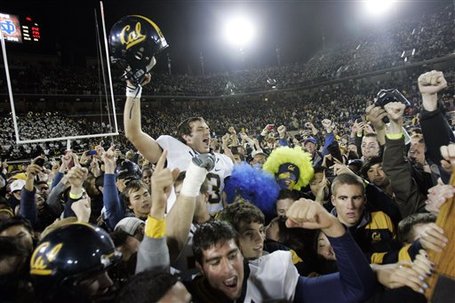 via a.espncdn.com
WE'VE GOT THE AXE!!