Golden Nuggets: Our Axe! Our House!

Share All sharing options for: Golden Nuggets: Our Axe! Our House! 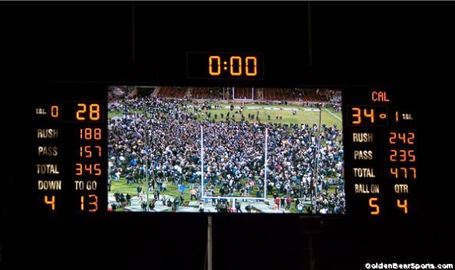 Whose domicile? OUR DOMICILE!

In only his third start, Vereen had the game of his career with 193 yards and three touchdowns on an astounding 42 carries.  JO caught up with him on the field immediately after the clock hit 0:00.

"I needed to do anything I could do to help our team win," Vereen said on the field immediately after the game, his voice choking with emotion. "I've never carried that many times, and I never thought I would carry that many times. I came into the game prepared for anything."

After the jump, we have a smörgåsbord of stories on last night's incredible win (which should easily be among the top-5 of Tedford's career).  From rankings to bowl projections to post-game quotes from Tedford and Harbaugh, there are plenty of stories covering a fantastic game.  Also, thanks to TouchedTheAxeIn82, the torrent is already available!  Tomorrow I'll wrap up the rest of the weekend in Cal sports, which included tough losses from women's basketball and women's volleyball.  For now, continue reveling in victory!

Click here to download the torrent of yesterday's win.  Once you're done downloading, keep seeding for everyone else who wants to preserve this game for all eternity.  Click here to vote in royrules22's top-25 poll.  For every ballot you don't submit, I'll submit three that have Texas at every position in the top-10.