Roll On: When Was Your First Big Game And What Was It Like?

Share All sharing options for: Roll On: When Was Your First Big Game And What Was It Like? 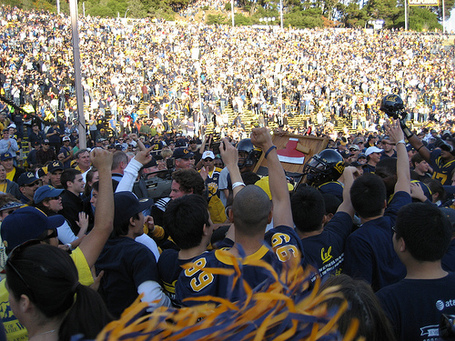 Usually, I'd write something breaking down the Furd's offense and defense. But what's the point? Jim Harbaugh is the hottest coach in the country. He's the perfect guy you want to play for. He's the most blue collar head coach with a $70 thousand toilet. Michigan should throw piles of money at his feet, right underneath the newspaper displaying his rant about their academics. Toby Gerhart is a Heisman candidate who's getting shafted because he's white, and happens to be fairly smart too (kind of like Alex Mack and Joe Igber). Andrew Luck is also a dark horse Heisman candidate, plus the next Peyton Manning, according to the unbiased Jim Plunkett.

No reason to even bother analyzing this game. The Furd are superior in every way. They've dominated the two best teams in the conference, one coming off a letdown week, the other decimated by the Football Crystal of Power. No way a Cal squad without Jahvid Best that couldn't even kick an extra point to seal an upset last week can match with them.

Plus, Tedford doesn't win big games. He's stoic, he peruses the sidelines, he's conservative, he's past his prime, and he's shown no signs that he's going to change. Harbaugh gets in your face and kicks your ass and washes his hands. This is his moment, his Big Game and Rose Bowl bid to lose. There is absolutely no way he can lose this game.

And hey, no one thinks we're going to win. We should just bow our heads down and hand over the Axe now. Then watch in misery as the Furdies miraculously sneak into a New Year's Bowl and bring the hammer down on Ohio State. Then hear an endless year of speculation of how Cal is on the downside, Furd is on the upside, and there's nothing Tedford can do to stop it...

(If what I just said above didn't make your blood boil, you belong in category 4 and should go wine-tasting this weekend. Then smash a bottle of Pinot Grigio over your head.)

Anyway, instead of going crazy with that stuff, let's talk history and look beyond this week's game to the first time you truly made the leap as a Golden Bear. We've talked about Furd pranks and Furd hate, let's revel in the experience of Big Gaem week and the game itself. Discuss in the comments: When was your first Big Game and what was it like? Was it awesome? Did it suck? How'd you manifest your hatred for all things red?

After the jump, we recall the experiences of two Bears who were at the greatest Big Game of all.

Two of Cal's most famous alum (you're probably familiar with one of them) recalled their first Big Games with Joseph Cannon in the Daily Cal.

For Michael and Michele, "The Play" is not just the greatest play in football history, it is a defining moment in their lives.

Michael (Silver) is now covering the NFL for Yahoo! Sports and after all these years, he still remembers it:

"I saw-even before The Play-one of the greatest college football games I've ever seen ... We were on the alumni side, and I'll never forget what I saw next, because I swear I would have remembered it forever even if The Play had never occurred: The entire Cal student section stood up as one and began clapping and doing their pre-kickoff cheer in what I can only describe as a total and uniform act of defiance.

"What I saw in that moment was a large group of people saying, 'Fuck it-we have come too far and worked too hard for this, and we do not accept this outcome. We are NOT FUCKING LOSING THIS GAME.' In other words, they were clinically insane.

"And that, honestly, was the moment I knew I'd go to Cal if I were to get admitted. Those were MY people, or at least I wanted them to be."

Silver got in. And so did Michele Tafoya. Now a sideline reporter for Monday Night Football, she got her first taste of the field at Memorial Stadium, when she stormed the it after "The Play."

"People ask me, 'Is that why you decided to go to Cal, because they won that game?' And I say, 'No, it was more the energy and the atmosphere of the university that Cal had, compared to what I experienced when I visited Stanford,'" Tafoya said. "Though "The band is on the field!" play certainly didn't hurt my decision."

At that moment, Tafoya fell in love and simultaneously found something to hate.

"As soon as that game was over, I knew what it meant to not like Stanford," Tafoya said. "From the moment I made my decision, it was an instant dislike, an instant I'm-never-going-to-like-you feeling towards Stanford."

So let's go back into the memory banks in the comments. Spill your first Big Game experiences.