Share All sharing options for: Golden Nuggets: The Great Transformation

Tedford, 48, will say he learned his lesson two years ago, when the Bears started 5-0 and then lost six of their final seven regular-season games amid rampant locker-room moping. Cal players say Tedford's transformation helped them avoid a similar plunge this season, after blowout losses to Oregon and USC. They since have won four of five entering the Big Game.

"I've noticed he's really more fiery this year - my first year here (2006), you didn't see too much of that," linebacker Mike Mohamed said. "He's more of an offensive guy, but he's also trying to get more involved with the defense, just so everyone feels like we're one big team and everyone can trust him.

"The yelling he's done this year, good yelling, some guys have said, 'OK, this is a new Tedford.' We get fired up because it's a side of him we really haven't seen before."
...

But as cranes hover over the west side of the stadium, and the facility begins to rise from a giant hole in the ground, other not-so-encouraging elements converge. Some fans grumble about Tedford's troubles in important games. They question his play-it-safe strategy and lament his inability to coax quarterback magic out of Riley, the way he did with Aaron Rodgers.

Then, on another level, an entirely different problem: Cal professors recently recommended the school stop subsidizing the athletic department's annual shortfall, given the bleak economy. That's especially relevant when the football coach will earn more than $2 million this year; Tedford's guaranteed salary is $1.82 million, and he pocketed another $500,000 in bonus money in January.

It seems fair to expect big results for big money. So has Tedford reached a crossroads at Cal? Will the Bears reach Rose Bowl/BCS glory under him, or will they stay stuck in the pack of good-but-not-great teams?
...
This much is certain: The Bears will be held to a high standard in the coming years. Offensive tackle Mike Tepper, on the verge of completing his sixth season in the program, flatly predicted that Tedford "will win a national championship at Cal, without a doubt."

After the yump we look at Sports Illustrated's Pac-10 fan survey, practice notes (Hill is back!), Ludwig's response to the UNLV rumors, post-Syracuse quotes from Randle/Montgomery, and instant recap, quotes, and analysis of today's loss to Ohio St.

Before we continue, let's take a moment to remember Uga VII, the University of Georgia mascot who died prematurely at age four (!) this week.  May he be succeeded by more glorious Ugas who will rest comfortably on bags of ice and bite at Auburn players. 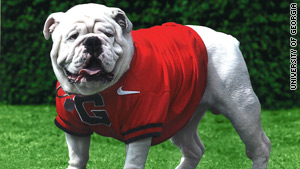