Thoughts On The Playcalling On The Final Cal Drive Against ASU

Share All sharing options for: Thoughts On The Playcalling On The Final Cal Drive Against ASU

Wow! What a game. Cal wins on the road in dramatic fashion, coming from behind. Something that, unfortunately, we've seen all too rarely from Cal recently. After the initial rush of excitement subsided, many people started to discuss the game in further earnest as they are wont to do. There was much consternation over the play calling at the tail end of the game. In specific, there was both a strong negative and strong positive reaction to 2 play calls in the last drive: A run out of the WildBear formation and a surprising pass out of the WildBear formation. While some instantly decried these controversial calls, others immediately praised their ingenuity and aggressiveness.

I do not pretend to be a final arbiter for these plays. My knowledge of football analysis comes mostly from reading HydroTech posts. But I did want to try to dig deeper and take a closer look at the context of the plays. Perhaps get into Tedford/Ludwig's head regarding the play calls and see what the thought process was. I use Tedford/Ludwig, because, although Ludwig is calling the plays, I feel confident in assuming that Tedford was involved. Especially with key plays such as these. After the jump, watch the video of the plays (thanks to TouchedTheAxeIn82) and then take a journey deeper inside Cal football.

The most important thing to do before reading this is to watch the video. Thanks to TouchedTheAxeIn82, we already have a YouTube video of the game winning drive:

Before we can really get into the specific plays at the end there, we have to take a step back and see what preceded it in the drive. From the ESPN Play by Play, here is the drive up to the tail end:

Jahvid Best apparently injured himself on that running play there. He later said that it was not that bad and felt as if he could have come back in if need be. Apparently, the coaching staff was holding him out for precautionary purposes.

Kevin Riley was absolutely dealing during this time period. There was 1 incomplete and an unfortunate facemask, but he was also hitting various receivers. He actually hit 4 different receivers, including Tight End Anthony Miller, who seems to always have at least 1 clutch catch a game. In 5 pass completions, Riley moved Cal from the Cal 23 to the ASU 7. Riley is 5-6 on this drive for 85 yards (which is slightly off, since he had to deal with that facemask penalty setting him back), slinging the ball with authority.

If you actually look one drive earlier, you'll see that Riley was dealing there, also. From the above Play by Play link, here is the preceding drive:

Despite that unfortunate incident, if you look at Riley's 4th quarter stats, he is, by my pathetic math attempts, 9-12 for 139 yards. Again, it's slightly off, because he had to throw for several yards twice thanks to a facemask penalty on Verran Tucker. Nonetheless, it is to Riley's credit that he was able to deal with that setback and continue marching down the field.

So, at this point with Riley absolutely slinging it, what do Tedford and Ludwig do?

Take the ball out of Riley's hands.

There are some reasons to do this.

1. Cal is on the ASU 7 yard line. So, with any reasonable kicker, you are playing with house money.

2. There is still a lot of time left on the clock (like 1:30ish). Assuming an accurate field goal is the end result of this drive, you want to bleed the clock of time. Runs bleed clock time much more than passes do.

So, what is the immediate next play call?

1st and Goal at ASU 7Shane Vereen rush for 2 yards to the ArzSt 5.

This was out of the WildBear formation. While watching it live, I was incredibly frustrated by this call. That was because I did not believe Tavecchio to be a reasonable kicker. I know that is harsh to say and I duly apologize for it. But having seen him lo these many games and the attempts earlier in the game, I just didn't trust him. I realize that if your kicker can't hit a field goal from the 7 yard line, you might as well not have one. Nonetheless, I didn't have the confidence in Tavecchio that Tedford did. Tedford was right, so hard to squabble there. 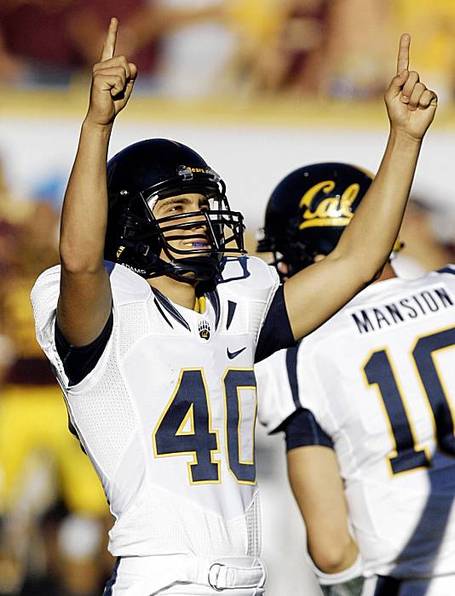 My perception of this play call (besides the time bleeding aspects) was to catch the defense off guard. They were anticipating a throw, so to run might be sufficient to squeeze in a TD. Plus, runs, in my experience, tend to have fewer failure rates than passes. So, Tedford/Ludwig are going into a very conservative mode here. Again, in their mind they are playing with house money. Take the least risky play and if it works, great. If it doesn't, it is OK, because the likelihood of fumble is low and the Field Goal is there. I understand that, although, running out of the WildBear seems to tip the D that they are going to see a run.

Then again, the ASU run D is remarkably sick, giving up fewer than 3 yards per carry. Perhaps Tedford/Ludwig felt the advantages of the additional blocker was greater than the element of surprise. Having faith in the talent of their players over some sort of sleight of hand.

I offer no answers to some of the questions that I've raised. Merely the concept that it seems there are MANY different things to discuss in how to make a play call. And makes me feel incredibly unqualified to ever pass judgment as to playcalls. Yet, I continue to write unabashedly!

So, that fails, kinda. We don't get a TD, optimal result. We also don't lose the ball, negative result. But we do burn time off the clock. And we gain a few yards to make the field goal attempt slightly easier. So, overall positive result.

That brings us to this next play. And this one; well, it's a doozy.

HydroTech often speaks of specific tendencies. That offensive coordinators call certain series of plays to set up later plays. The specific example here is that although Cal has run the WildBear innumerable times this year, I don't quite remember them ever throwing out of it. Or, in the alternative, they rarely, rarely, rarely throw out of it.

Now, the ASU Defensive coordinator now believes that Cal has gone into conservative mode. They are in the WildBear again. Riley is nowhere to be seen. They are going to run again, right? They've never passed out of that damnable formation before. And passing, especially with a running back, in this situation, is extraordinarily dangerous. Some might even say foolish.

Time to set the trap?

Now, I cannot pretend to be inside the mind of Tedford/Ludwig. But this is, to me, the most reasonable theory I can figure regarding this play call. It was a remarkably ballsy call.

And yknow what, it almost worked! It also didn't work. Disastrously. That is generally what happens when you execute an aggressive play like that. The optimum and negative spectrum is much greater. So, here the TD is nearly scored, but also an interception is almost made. That play took about 4 years off my life.

After this, Tedford/Ludwig go into incredibly conservative mode and, I believe, took a knee. HydroTech informs me that Riley centered the ball. I don't quite remember, I was in full on panic mode by this point. At the time, I was extraordinarily pissed that we didn't take an honest shot at the end zone with the red hot Riley there. But, like I said, I didn't have the faith in our kicker. Tedford/Ludwig did and, seeing the near disaster on 2nd down, wanted to run down the clock and ensure the best situation for our kicker occurred. After I calmed down (i.e. after Tavecchio made the kick), I saw the wisdom in Tedford/Ludwig's 3rd down call. 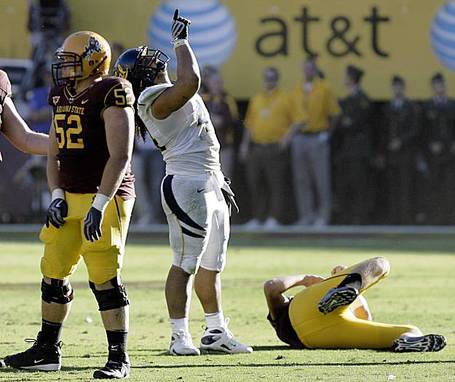 I honestly have no overarching conclusion here. There's no TEDFORD IS GREAT! or TEDFORD IS STUPID! in my mind here. By this post, I am not trying to really make a determination as to whether or not they were good or bad calls. An argument could be made that, considering we achieve the optimum result in the end, a game-winning field goals, the calls were good. That argument, to me, seems to lack some context, in specific, the high rate of failure for the Vereen throw. Nonetheless, some credit has to be given for the win. In the end, I merely wish to provide some context to what I perceive to be the reasoning behind the play calls. I'll open it up to you:

What, dear readers, are your thoughts on these two play calls?