With only 3 more chances to Revel in Victory and with Avinash completing basketball recaps before I can even exit Haas, I am running out of my extremely limited usefulness around here.  If I don't start contributing, I'll probably miss out on that internet money which is coming to us any day now.  So for the 5 basketball fans around here (including 3 mods), I give you CBKWitness, a weekly compilation of what I witnessed from Cal Basketball.

Most important observation so far?  Go to the games, people!  Haas was about half full for the two men's games, which is embarrassing for a team this good, this entertaining, and this easy to root for.  Show up and support our team!

The men won their two preliminary Coaches Vs Cancer games last week, 75-70 over Murray St and 95-61 over Detroit.  From the Murray State game:

- The referees respect Montgomery much more than Braun.  The lead official called an absolutely horrendous charge on Boykin midway through the first half, and Monty completely dressed him down at the time out as 4,000 Cal fans looked on.  Not surprisingly, the refs didn't call much on Cal for the rest of the half and all of the close calls went the Bears' way.

- From my friend Mike Montgomery: "Murray St is playing some good d".  They were, for almost the entire game.  Murray State is a good team and they challenged Cal for the first half before mounting a serious comeback to close the game.  It was a little tense in the final minutes as Randle nearly turned it over a couple times and Murray State hit some improbable threes.  Don't be surprised to see the Racers in the NCAA tournament.

- Randle put on 10 or 15 pounds in the off-season to improve his defense (sick of Jorge hounding him in practice, perhaps?) and it looks to have paid off.  He was strong on the ball and did not let Murray State's point guard break him down on the dribble.

- The downside to Randle's new bulk?  He did not look as explosive offensively and struggled to shake his man.  I hope the extra pounds haven't slowed him down, because his speed is one of his chief assets, and at his height he needs defenders to respect his quickness in order to get enough space to get his shot off.

- Randle struggled to get in the lane and struggled with his outside shot, but still finished with 18 points.  Like all good scorers, he knows how to get to the free throw line when his shot isn't falling.  He hit 10 of 11 from the line for the game, 8 in the final 6 minutes of the first half as Cal built an 8 point halftime lead. 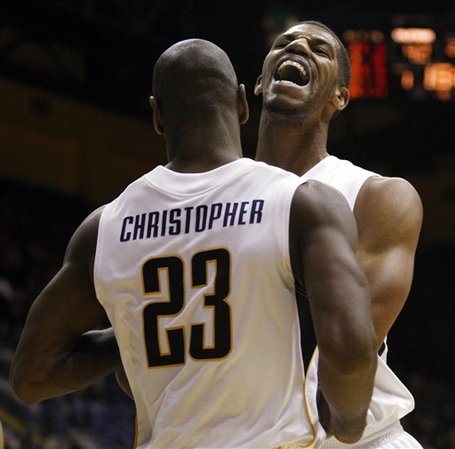 - The biggest cheer of the game came as Max Zhang entered late in the first half.  He's still a liability offensively - it would be one thing if he just got out of the way, but his spacing is poor and he's often in the wrong spot.  It's the mark of a truly bad offensive player - not just being being ineffective, but making your teammates worse.  On the other hand, his defense and boxing out have really improved, and Cal built its lead with Max in the lineup.

- DJ Seeley was the star of the inter-squad scrimmage, displaying a beautiful shooting stroke on a team full of great shooters.  In this game, however, he was pretty juiced up and missed badly on his only three point attempt.  Once he settles down he'll be able to score off the bench.  Defensively he's a huge liability, as he was unable to stay in front of his man.  Jorge, teach him how it's done!

- Markhuri Sanders-Frison, our new JC transfer center, was strong defensively, aggressive (at one point diving to the floor for a loose ball), vocal - all things that Jordan Wilkes was not.  He doesn't have Wilkes' smooth passing or shooting touch yet, but he was better offensively than expected.  One thing he doesn't seem to do is jump - he boxed out fairly well, but I don't think I ever saw him jump for a board.  He also lost the opening tip, and something tells me that if we can't win the tip-off against Murray State, we're probably not going to win it much this year.

- We have kind of a freak-show at center: a 7'3 guy who weighs maybe 240 pounds and a 6'7, 270+ pound guy who can't jump.  If Max ate Markhuri, I think we'd have an unstoppable force.  As it is now, we have some improvement at center from last year in terms of production and a lot of improvement in terms of entertainment.

- Cal was a bit lazy getting out to challenge the three point shot.  I thought they played pretty well defensively in general, but this was their weak point, especially at the end of the game.  The final score was probably a little closer than the game as Murray State hit some late threes, but Cal has to improve its perimeter defense.

- I love Jorge.  He is approaching the Hawk status in my mind.  He hit two spot-up three pointers, which wasn't part of his game last year. 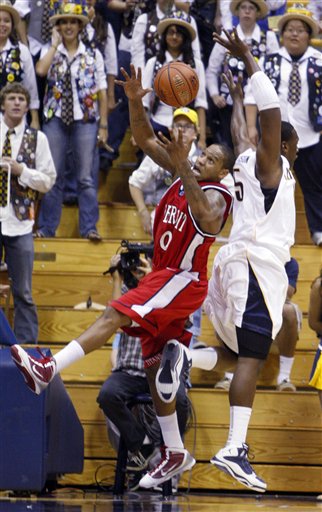 Ragnarok is right: The band plays a lot more than at football games.

- Randle came out on a mission to prove that his offensive struggles in Monday's game were a fluke.  He looked great, getting around Detroit's point guard with ease.  Late in the second half Randle had 15 points, 0 fouls, while his opponent was scoreless with 3 fouls.

- Cal jumped out on Detroit and seemingly put the game away early, building a 40-25 advantage.  Detroit scored the last 7 points of the first half and first 4 points of the second half before Cal took over and cruised to a win.  Murray State is a better team than Detroit, but Detroit has some impressive athletes and skilled players.

- Sanders-Frison contributed even more offensively with a number of slick moves but struggled with fouls for the second game in a row.  With limited depth in the post, this will be an ongoing concern.

- Part of that lack of depth is Harper Kamp, who did not play in either game and will miss the trip to Madison Square Garden.  He did practice on Monday, so hopefully he'll be able to play this year.  We'll need him.

- Christopher had a tough first half, scoring only 4 while Detroit's two guard went for 15.  That changed after half, as he finished with 18 points and clamped down on D.

- Theo isn't very fast or agile, but he's so smart and fundamentally sound defensively that he keeps his man from getting to the lane.  His shooting form is beautiful, and he's also taking the ball to the hoop more.

- Midway through the second half, Cal was 24-26 from the free throw line.

- Max played 14 minutes and looked good, altering and blocking shots, boxing out, rebounding, even scoring on a few put-backs to tally 7 points.  He has a long ways to go, but he's much improved from last year.

- Jorge again had four fouls, but some were pretty cheap.  Monty played him for several minutes with four fouls, perhaps to let Jorge practice playing with more caution.  Jorge finished the game and never picked up the fifth foul.

- The senior starters came out early with a huge lead, and our bench played strong in their stead.  Our final lineup had players from five countries: Max (China), Nikola (Serbia), Jorge (Mexico), Nigel Carter (USA), and Bak Bak (Sudan)

- Yes, even Bak Bak played, which (I believe) prevents him from redshirting this year.  It seemed like a strange move at the time, as Bak is clearly not ready to contribute and won't be for at least another year.  If Monty did indeed burn his redshirt, it is probably to maintain class balance.  Cal just signed a (very good) recruiting class of four freshman who will arrive next fall, and if Bak redshirts that will make 5 players in one class year.  By "playing" (four minutes!) this year, he'll be a sophomore with Brandon Smith next year, making a freshman class of 4 and a sophomore class of 2 instead of 5 and 1.  Monty probably wants to avoid having another huge class like our current 5 seniors, which could have been 7 (!) had Jordan Wilkes and Ryan Anderson stuck around.  It means one less year of Bak in the program but more balance.

- I'm heading to my first women's game of the year, this Sunday against Baylor, so I'll have plenty about the ladies next week.

- Cal plays Syracuse at 4PM tomorrow.  Syracuse lost their exhibition game to a D-II school but will be playing with a huge home court advantage in Madison Square Garden.  Cal has a fantastic opportunity to show off for the rest of the country, playing an east coast team at an east coast time.  May they be awed by the power of Max 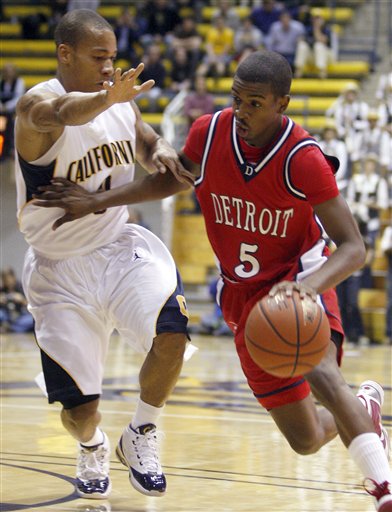